UK weather: a month's rain could fall in two hours as heatwave breaks. 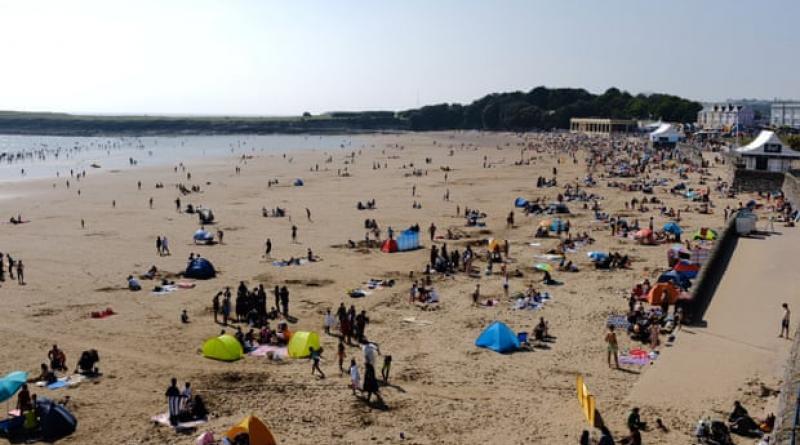 Fears of flash flooding in parts of country, while experts warn extreme heat could become the norm.

Over a month’s worth of rain could fall within two hours on parts of Britain this week, causing flash flooding, while an ongoing heatwave is set to break records.

Police and the coastguard issued warnings over the weekend as two people died – a woman after a collision between a jet ski and a boat in north Wales, and a man believed to have drowned in a lake at a Norfolk beauty spot.

Yellow thunderstorm warnings are in place across the country between Monday and Thursday, with the Met Office saying areas affected by potential severe thunderstorms could see “torrential downpours”.

“Even in just a couple of hours we could see 80mm of rain falling. That amount of rain in a short amount of time especially when the ground is hot can lead to flash flooding,” the Met Office said, adding that the average rainfall for England during the month of August is around 70mm.

While the national weather service said the hot and muggy conditions across the country were perfect for thunderstorms, it added that countrywide warnings had only been put in place because it was not yet possible to predict precisely where they would occur.

It was also unable to say whether areas already affected by flooding this year, such as parts of Yorkshire and the Midlands, could fall victim to the downpours.

Meanwhile, it added, the country would probably face three days in a row of 35C temperatures – among the longest periods of such heat recorded in the UK.

On Friday, a high of 36.4C – the hottest August day in 17 years – was recorded at Heathrow, while the spokeswoman said 36C had been recorded on Saturday and was expected again on Sunday, with Kent, Sussex and parts of London expected to see the highest temperatures.

“Seeing temperatures of 35C or more in the UK is rare, but what’s also rare is seeing them lasting for a couple of days or more, and that’s what we’re seeing at the minute,” they added.

The phenomenon has occurred three times before – twice during the 1976 heatwave, where three consecutive days of 35C heat were recorded in both June and July, and in August 1990.

People flocked to beaches as temperatures soared this weekend, with images on social media showing traffic jams and packed car parks in the UK’s coastal towns.

Many people also took to the water. In north Wales, a woman died after a collision between a jet ski and a boat, police said. Emergency services were called to the incident in the area of Menai Bridge, Anglesey, at about 7.30pm on Saturday.

A spokesman for North Wales police said: “Officers received a call from the Welsh ambulance NHS trust at 19.29hrs yesterday. One female casualty was transferred to hospital following the incident but has sadly since passed away.” Officers appealed for any witnesses to the incident to contact North Wales Police on 101 quoting reference number Y114906.

In Norfolk, police recovered a body from the water at Bawsey Pits – a series of disused sand pits and quarries which has been opened up as a country park – near King’s Lynn, following reports of a man getting into difficulty in the water.

Also in Norfolk, a woman died in the sea near Waxham on Sunday afternoon. Supt Jason Broome said: “A woman, aged in her 30s, was recovered from the water and she was sadly pronounced dead on arrival at hospital. Her death is being treated as unexplained but not suspicious.”

People in Dorset were urged to avoid Lulworth and Durdle Door due to large numbers already in the coastal areas, and officials said they are closing roads to manage traffic. On Saturday, HM Coastguard dealt with 340 incidents across the whole of the UK – the highest number of call-outs in a single day for over four years.

The coastguard coordinated search and rescue responses to a wide range of incidents, including people being cut off by the tide and children swept out to sea on inflatables. In total, the service rescued 146 people and assisted a further 371.

South East Water urged its customers to put away hosepipes, garden sprinklers and garden water toys as it said that a spike in demand had left some people with low water or no water.

A leading health expert warned yesterday that it would become highly dangerous to be outdoors if nothing were done to curtail the climate emergency. Ilan Kelman, a professor of disasters and health at University College London, warned that the weather seen through the mini-heatwave, which poses a serious risk to vulnerable people, would become more regular unless action was taken.

The Met Office spokeswoman also voiced concerns over the more frequent occurrence of record-breaking temperatures. “The top 10 highest temperatures for the UK have all occurred since 2002,” she said. “It does feel like temperatures are becoming more extreme in the UK – that is likely a result of climate change.”

She added that the heat experienced in parts of the UK over the weekend could be particularly difficult for patients recovering from Covid-19, as hot weather can worsen respiratory conditions.