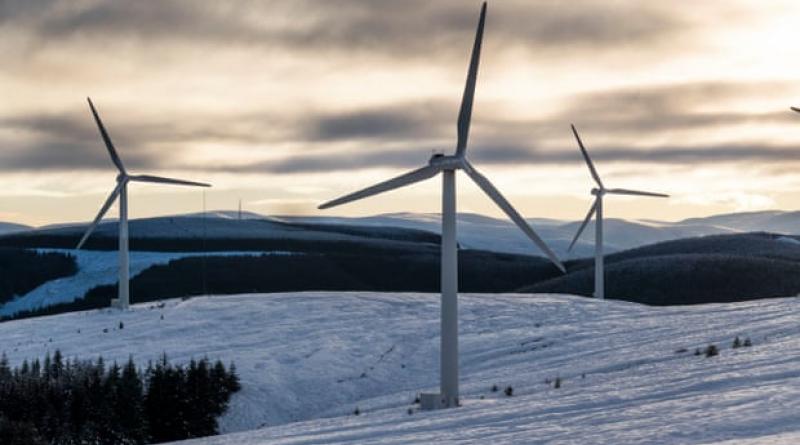 The UK’s renewable electricity outpaced its fossil fuel generation for the first time in 2020 and could remain the largest source of electricity in the future, according to an independent climate thinktank.

The thinktank behind the report, Ember, revealed that renewable energy generated by wind, sunlight, water and wood made up 42% of the UK’s electricity last year compared with 41% generated from gas and coal plants together.

Although renewable energy has overtaken fossil fuels during the summer months before, 2020 was the first time that renewables were the main source of the UK’s electricity over a year.

Renewable energy also outperformed fossil fuels across the EU for the first time, according to the report, following a collapse in the use of coal last year.

Charles Moore, the programme leader at Ember, said: “With Boris’s 40GW 2030 offshore wind target, gas generation is set for further rapid declines over the 2020s. It is clear the UK has started its journey towards gas power phase-out in 2035 as recommended by the Climate Change Committee.”

The report found that solar and hydro power generated 4% and 2% of the UK’s electricity respectively last year, which was unchanged compared with the year before.

Bioenergy, which is power generated by burning wood pellets, grew slightly to make up 12% of the UK’s electricity, raising concerns over the use of an energy source “with a high risk of negative climate and environmental impacts”.

Moore said: “We view bioenergy as a much higher risk form of renewable energy, for both climate and environmental outcomes, than the other forms such as wind and solar.” 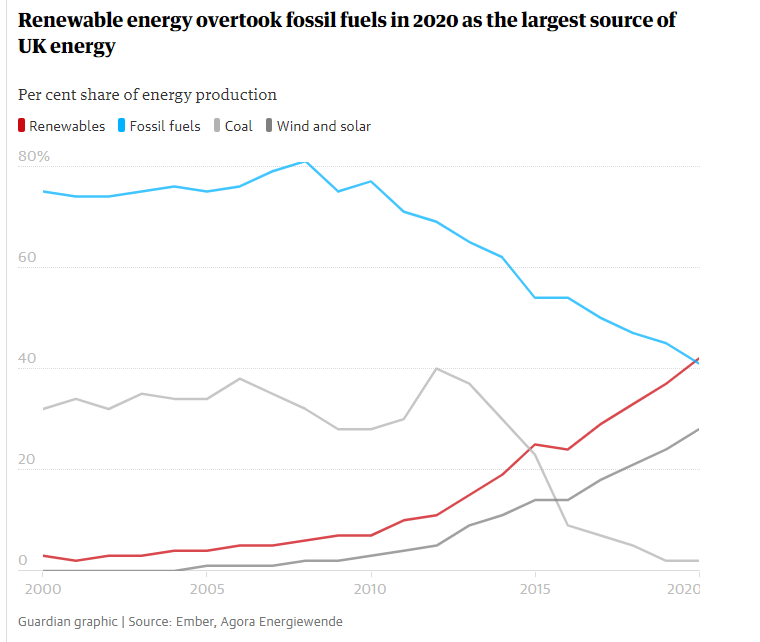 The trend towards renewable energy power accelerated in 2020 following a sudden drop in demand for energy from the national grid as shops, offices and restaurants closed during the Covid lockdown restrictions, the report said. Renewable energy, the cheapest source of electricity in the UK, was able to claim a larger share of the electricity mix as the electricity system operator left gas plants idle and called on nuclear reactors to lower their output to stop the grid from being overwhelmed with more electricity than the UK required.

The thinktank predicted that renewable electricity will maintain its lead in the UK’s electricity system in the years ahead, even after normal demand levels return, as new wind and solar farms are built across the country.

“The coronavirus has accelerated the trend towards renewable energy but we would have expected renewables to overtake fossil fuels by 2021. It has brought forward the trend by only a year or two,” Moore said. “Renewables will probably remain above fossil fuels this year, but it’s very dependent on various things like nuclear output and the weather. Even if fossil fuels return this year it will be a narrow lead and a short-lived one.”

The UK recorded a string of green energy records in 2020, including the highest recorded output for wind during Storm Bella on Boxing Day, and a new record for solar power in April.

The electricity system operator, which is owned by National Grid, said the larger role for renewables also caused the “carbon intensity” of Great Britain’s power system to fall to its lowest level on record. It fell to 181g of carbon dioxide per kilowatt-hour of electricity last year, compared with an average of 215g in 2019 and 248g in 2018, it said.

Renewables Surpass Coal in Both the U.S. and U.K. in Historic Firsts.