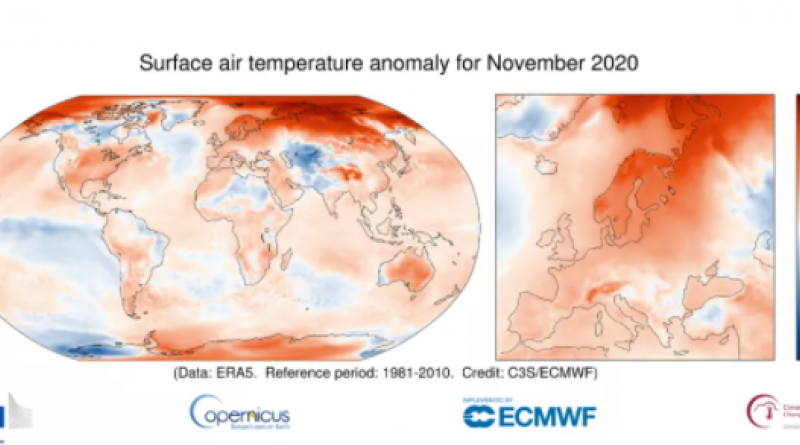 Global temperatures soared last month, making this November the hottest ever recorded, according to a new report.

Unless temperatures dip dramatically in December, 2020 could potentially overtake 2016 as the hottest year on record — if not, the years will likely tie for the title, according to current estimates.

This concerning news comes from the Copernicus Climate Change Service (C3S), a program of the European Commission that tracks global temperature trends. On Monday (Dec. 7), the agency reported that global temperatures in November 2020 exceeded the warmest Novembers on record by nearly 0.2 degrees Fahrenheit (0.1 degrees Celsius). November in both 2016 and 2019 previously held the record.

Northern Europe, Siberia and the Arctic Ocean experienced the highest increases in temperature compared with previous years, followed by regions of the United States, South America, southern Africa, the Tibetan Plateau, Australia and eastern Antarctica. High temperatures in the Arctic meant that ice in the region took longer to freeze than in winters past, which could lead to thinner ice and therefore greater melting in late spring and summer of next year, The New York Times reported.

Arctic sea ice-extent — a measurement of how much ice covers the ocean — fell to the second lowest area recorded for November, since scientists began collecting satellite data from the region in 1979, C3S reported. As the Arctic shrunk, powerful hurricanes raged in the Atlantic Ocean and wildfires continued to burn across California, confirming scientists' predictions that climate change can cause such disasters to become stronger and more frequent.

With one month to go, "2020 is currently on a par with 2016, the warmest calendar year on record, closely followed by 2019," according to the C3S report. On the whole, 2020 is "likely to remain on a par with or become marginally warmer than 2016," unless temperatures fall significantly in December, which would not be unprecedented.

In 2016, record-setting temperatures coincided with a strong El Niño event, which is a cyclical warming of the Pacific Ocean that drives average global temperatures up, Petteri Taalas, the secretary-general of the World Meteorological Organization (WMO), an agency within the United Nations, said in a statement on Dec. 2.

"We are now experiencing a La Niña, which has a cooling effect on global temperatures, but has not been sufficient to put a brake on this year's heat," Taalas said. "Despite the current La Niña conditions, this year has already shown near record heat comparable to the previous record of 2016."

According to a provisional report, based on data from January to October, the WMO predicts that 2020 will be one of the three warmest years on record. The past decade, starting in 2011, will be the hottest decade on record, with all the warmest years occurring since 2015, the agency reported.