Temperatures in parts of Spain reach highest on record for May 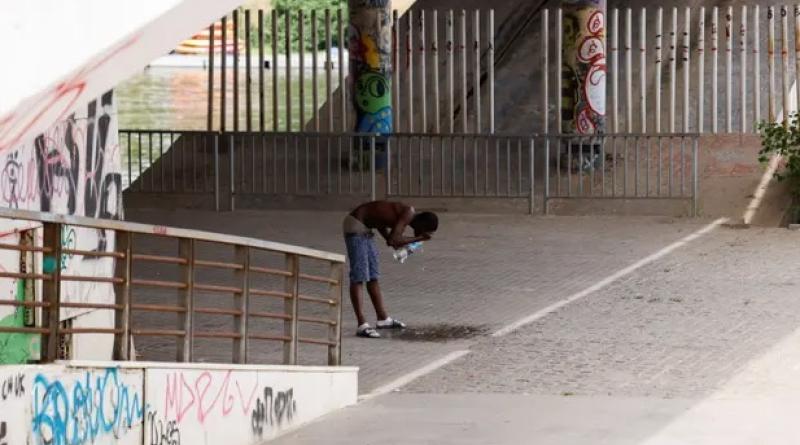 ‘Extraordinarily hot for time of year’ in central and south regions, says meteorological agency, with forecast of 40C in Andalucía

Parts of Spain are experiencing their hottest May since records began, as a mass of hot, dry air blows in from Africa, bringing with it dusty skies and temperatures of more than 40C (106F).

Spain’s state meteorological agency, Aemet, has warned of a weekend heatwave of an “extraordinary intensity”, with temperatures between 10C and 15C above the seasonal average and more akin to high summer than mid-May.

“The early hours of 21 May have been extraordinarily hot for the time of year across a good part of the centre and south of the peninsula,” Aemet said on Saturday. “In many places the temperature did not fall below 25C, something practically unheard of in May.”

On Friday, the mercury at Seville airport reached 41C, while another Andalucían city, Jaén, logged its first May temperature of more than 40C as the thermometers registered an unprecedented 40.3C – almost 2C above the previous record.

The city of Segovia, north-west of Madrid, also experienced its first “tropical” May night on Friday as temperatures remained above 20C.

Temperatures in parts of Andalucía are forecast to reach a maximum of 40C on Saturday afternoon, with highs of 36C expected in Madrid and 38C in the north-eastern city of Zaragoza.

Much of Spain is on yellow alert, meaning that while there is no “meteorological risk for the population”, some activities could be hazardous.

The Spanish government has activated its national plan for excess temperatures and is advising people to keep hydrated and wear light clothing. It also recommends that a close eye be kept on children, pregnant women and older and chronically ill people.

While the heat is expected to peak across most of the country on Saturday, temperatures in the north-eastern Ebro valley could reach an unheard-of 39C on Sunday.

Spain recorded its highest ever temperature last August, when the Andalucían town of Montoro reached 47.4C.

A recent Aemet study found that the arrival of 30C temperatures across Spain and the Balearic islands had come an average of 20 to 40 days earlier over the past 71 years.

“The summer is eating up the spring,” Rubén del Campo, an Aemet spokesperson, told El País on Friday.

“What’s happening fits perfectly with a situation where you have a warmer planet,” he said, adding that the rise in temperatures was a “direct and palpable [consequence] of climate change … The climate in Spain isn’t the one we used to know. It’s got more extreme.”

France has been experiencing above-normal temperature for more than a month. The state forecaster, Météo France, said such episodes of extreme heat were likely to become longer and more severe, start earlier and recur more frequently as global heating advances. However, it said there was no indication this year that the unusually hot spring presaged a record-breaking hot summer.

Earlier this week, the UK Met Office said the chances of the record-breaking recent heatwave that has pushed temperatures in parts of India and Pakistan to 51C had been made more than 100 times more likely because of the climate crisis.

cover photo: A man cools himself with water in Seville, where the temperature reached 41C at the airport on Friday. Photograph: Marcelo del Pozo/Reuters