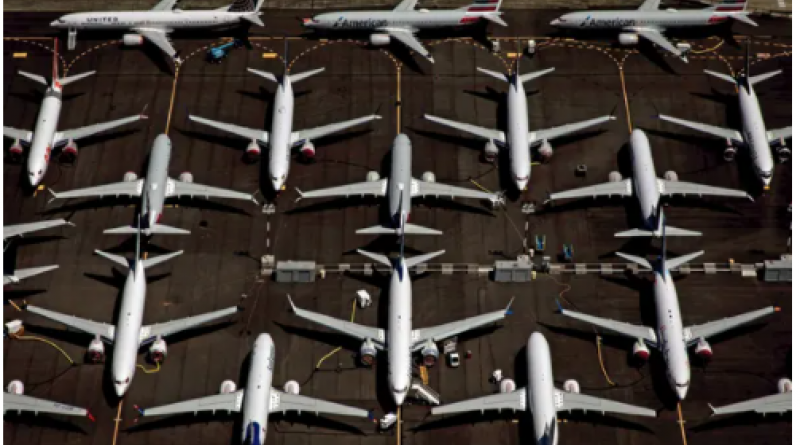 Taxes of €325m a year should be used to fund zero-carbon aviation technology, report suggests.

Climate-heating emissions from private jet flights have soared in Europe since 2005, according to a report. It calls for wealthy fliers to pay ticket taxes of €325m a year to fund the acceleration of zero-carbon aviation technology.

Carbon emissions from private flights rose by 31% from 2005-19, the report says, and private aviation had rebounded to pre-pandemic levels by August 2020, when 60% of public flights were grounded.

Travelling by private jet is the most polluting activity an individual can undertake, the report says, with four hours of flying equivalent to the total annual emissions of the average European citizen.

The study, by the campaign group Transport & Environment), found that private jets were five to 14 times more polluting per passenger than commercial planes, depending on the jet used.

It also found that almost half of private jet flights within Europe were short – less than 500km – compared with the quarter of commercial flights that travel under this distance. 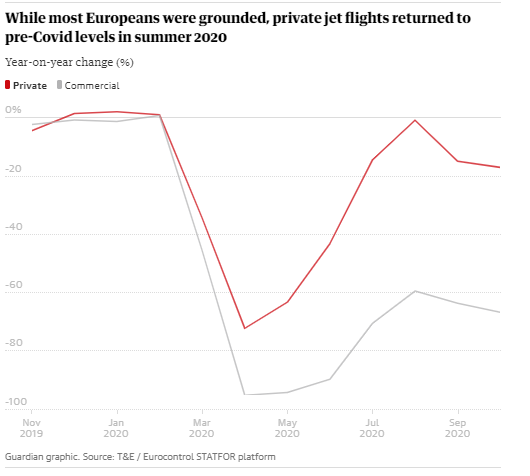 The T&E report argues that with the average private jet owner being a billionaire and flights being little taxed at present, these travellers can afford to pay to fund the development of electric or hydrogen-powered aircraft and low-carbon aviation fuels. The first zero-emission aircraft will carry only a small number of passengers over short distances, perfect for the world of private jets, the report adds.

Andrew Murphy, an aviation director at T&E, said: “Super-rich super-polluters are flying around like there’s no climate crisis. The sector falls outside of the regulatory reach of many governments, despite the enormous climate impact that these flights have, and despite the growth of their usage.

“But the upside is that the private jet market is ideally suited to help bring about aviation’s Tesla moment, making hydrogen and electric planes a reality.”

In January, the Guardian reported that wealthy UK flyers were opting for private jets to evade Covid-19 and beat lockdowns. The prime minister, Boris Johnson, was recently criticised for taking short private jet and helicopter flights, and his predecessor, David Cameron, used a private jet to visit his holiday home in Cornwall.

The report says the UK and France dominate private flights in Europe, responsible for almost 40% of all emissions. The French Riviera resort of Nice is one the most popular destinations, which T&E said showed that many private flights were for holidays and business.

The report recommends that by 2030, regulators should only allow the use of electric or green hydrogen aircraft for private jet flights under 1,000km within Europe. Until 2030, taxes on flights and fuel should be imposed on fossil-fuel private jets, it said, to account for their disproportionate climate impact.

The report calculates that a ticket tax on private flights would raise €325m a year if based on a system already approved in Switzerland, where short flights are charged €360 and long ones €1,200. The Swiss government will use the revenue to fund the development of sustainable aviation fuels, invest in the country’s rail network and pay a carbon dividend to every Swiss citizen. Unlike vehicle fuels, there is little or no tax on jet fuel, but if implemented this could raise millions more in revenues, the report adds.

Market researchers estimate the private jet market will increase by 50% between 2020 and 2030, with “increasing number of high net worth individuals one of the significant factors”. One private jet operator, GlobeAir, reported a 11% increase in sales in July 2020 compared with 2019, with fear of Covid-19 contagion and lack of available commercial flights likely reasons.

“Everything is primed for it to grow,” Murphy said, noting that struggling commercial airlines may provide flights to fewer destinations in future and fewer business class seats, as home working continues.

Athar Husain Khan, the secretary general of the European Business Aviation Association, which represents the private jet sector, said: “Our track record shows we welcome a greater push towards a sustainable business aviation sector, but it’s important we do not misrepresent the true economic value, business benefit and societal impact the sector makes.

“We appreciate our sector has a different emissions profile [but we are] actively working towards decoupling its CO2 emissions from the growth of the sector. Over the last 15 years, emissions per hour, per flight, per business aircraft have decreased by 36%,. The sector is, in principle, not against environmentally motivated taxation as long as those funds are used directly to finance the research and development required to help meet emissions goals.”

UK Government urged to include aviation and shipping in net zero legislation.