'A summer unlike any other': heatwaves and Covid-19 are a deadly combination. 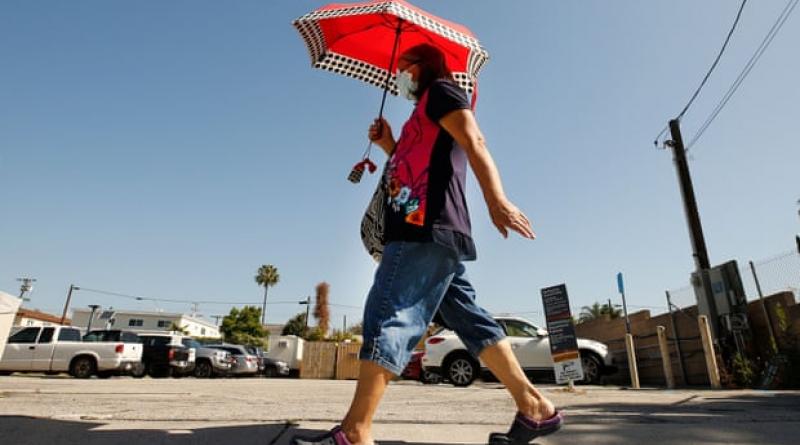 As underserved populations face hotter neighborhoods and limited access to air conditioning, the pandemic threatens the malls and libraries where they typically find relief.

Temperatures in some California cities this week broke decades-old records. The heatwave that cooked Las Vegas over the past few days brought temperatures over 100F. And in Phoenix, highs this weekend are expected to approach or exceed 110F.

This year is on track to be one of the hottest on record, and public health officials worry that in cities across the US, summer heatwaves will collide with the coronavirus pandemic, with deadly consequences for poor, minority and older populations.

Even before the pandemic hit, heat was killing more Americans than all other natural disasters combined. People who live in cities are especially vulnerable to heatwaves because of a phenomenon called the “urban heat island effect” – cities with populations of 1 million or more can be up to 5F hotter than surrounding areas due to high population density, a lack of greenery and shade, and because materials like steel, concrete and asphalt tend to absorb more heat.

Analyses have also found that cities’ poorest neighborhoods tend to be hotter, and that many low-income families have been struggling to cope for years. In some neighborhoods of Los Angeles, New York and Chicago, up to a third or more of households lack air conditioning. Due to the economic fallout of the coronavirus pandemic, many more are unable to pay to run their ACs. And even as cities begin reopening after lockdown, many of the malls, public libraries and recreation centers where overheated Americans traditionally went to cool down remain risky, especially for older people and others with a heightened risk of dying from Covid-19.

Throughout the country, public health officials told the Guardian they were scrambling to find ways to protect the most vulnerable from the dual threats of heat and coronavirus. “This summer is definitely not going to be like any other summer,” said Deanne Criswell, the commissioner of New York City Emergency Management. “We’re not going to have the same level of facilities open that New Yorkers typically go to all the time to stay cool. It’s a big concern.”

New York is in the process of installing 74,000 air conditioners in the homes of low-income seniors, according to Criswell. The city is also seeking to help more people pay for electricity this summer, as the unemployment crisis leaves thousands of New Yorkers without the means to make rent and utilities. Other cities across the US have asked utility companies not to shut off service this summer, even if customers can’t pay bills, so that they have access to water, cooling and refrigeration through the hottest days.

“Every summer we worry about the heat when it ramps up – especially in April and May before people have a chance to acclimatize,” said Carolyn Levering, the emergency management administrator for Las Vegas. “I think it just gives us extra concern this year because of the pandemic.”

In Las Vegas, Phoenix and Los Angeles, officials are keeping some cooling centers – designated public buildings where residents come for cold water and a respite from the heat – open, at a reduced capacity so people can maintain social distancing while seeking relief from the heat. At five cooling centers in LA, anyone who enters has their temperature checked and is required to wear a mask and remain 6ft away from other people. In Nevada’s Clark county, which includes Las Vegas, four cooling centers stayed open during the most recent heatwave.

But none of these solutions are broad enough to catch everyone at risk of dying from heatstroke, advocates say. “Hell no, it isn’t enough,” said Jonathan Parfrey, the executive director of the LA-based non-profit Climate Resolve. “This is just a staggering problem.”

In South LA, where 64% of residents fall below the poverty line, more than 40% of households lack air conditioning, according to a study published this month by researchers at the University of Southern California who analyzed data from the electrical meters of nearly 180,500 households. “Poverty was a better predictor of whether or not people had AC than even how hot or cool it was in a neighborhood,” said Kelly Sanders, one of study’s authors.

The vast majority of these heat-related deaths in cities occur inside homes that aren’t air-conditioned, said New York’s Criswell.

“That ain’t going to be me this year,” said Collette McCoy-Douglas, 67, a retired nurse who lives in a public housing facility for seniors in Chicago. McCoy-Douglas said her building turned on the central air conditioning a day early, after residents complained during the heatwave over Memorial Day weekend. But the system, which only cools each apartment’s living room, “felt warm when I touched it,” she said. Her thermostat read 100F. “So I’ve poured ice on my head twice today – it messed up my hair, but it helped,” she laughed.

A spokesperson for Chicago Housing Authority said it was not aware of any air conditioning issues at senior housing facilities.

Although McCoy-Douglas considered looking for someplace cool she could go, she decided against it. “I’ve got an autoimmune disease, I have asthma, I have stents,” she said. “I’m more skeptical against the coronavirus.” Unable to cool down, she eventually picked up a neighbor, an older woman with cerebral palsy, and they drove around for a bit in McCoy-Douglas’s air-conditioned car. Chicago’s infamous 1995 heatwave, which killed more than 700 people, was on the minds of both women.

“You know, in my apartment, we have people with mental illness and disabilities. They can’t even leave the building,” said McCoy-Douglas, who also knew of two neighbors who had died of Covid-19. “It just breaks my heart. It’s just inhuman.”