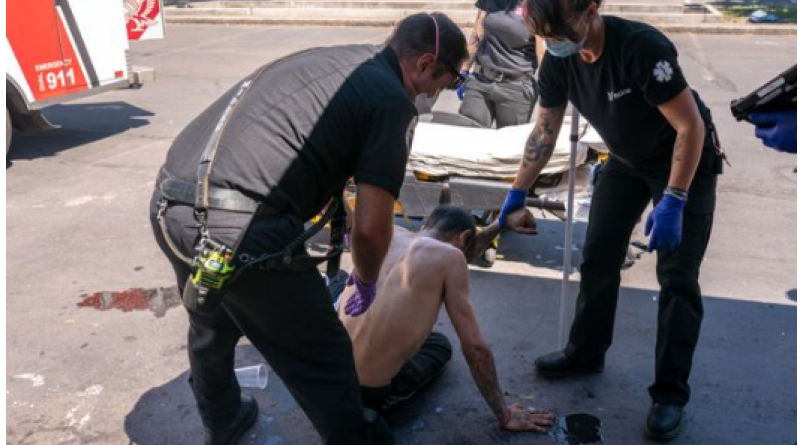 Extreme weather events are popping up all over the world—from heat waves to tropical storms, droughts, and tornadoes—and climate change is a unifying factor.

Extreme temperatures in China coupled with a lack of hydro-power forced blackouts in some of its largest industrial cities last month. A rare and short-lived subtropical storm popped up in the South Atlantic off Argentina and Uruguay. And record heat continues to sear Canada and the Pacific Northwest, while drought crackled the entire western U.S., leaving it primed to burn.

Summer in the Northern Hemisphere is just days old, but the extremes keep piling up. The conditions driving these events—heat, ocean warming, changes in longstanding weather patterns—aren’t going away anytime soon, meaning the worst may be yet to come.

While forecasters have known for weeks that this summer was going to brutal, that’s done nothing to lessen the shock as the records and casualties mount. More than 60 people have died during the current heat wave in Oregon, and more than 300 have perished in British Columbia. “It’s just a matter of running up the score, at this point,” said Judah Cohen, director of seasonal forecasting at Atmospheric and Environmental Research, part of risk analytics firm Verisk. 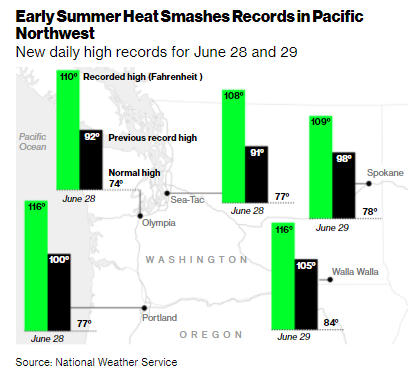 The U.S. has led the world in economic losses from climate-related disasters, which totaled $944.8 billion from 1998 to 2017. China was second with $492.2 billion and Japan third with $376.3 billion, according to the United Nations Office for Disaster Risk Reduction. Extreme weather cost the U.S. $45.4 billion per year on average from 1980 to 2021, according to the National Centers for Environmental Information. There were nearly two-dozen $1 billion disasters last year, which killed 262 people and cost a total of $96.4 billion, the fourth most ever. And the frequency of such events is rising.

The culprit behind these events is increasingly clear and obvious: climate change. In the case of a tornado that ripped across the Czech Republic last week, for instance, a cold and wet spring followed by record June heat transferred latent energy into the atmosphere, which resulted in the extreme weather. Scientists at Austria’s Central Institute for Meteorology and Geodynamics said hotter temperatures caused by climate change were to blame. The cyclone left five dead.

Even as much of the world is suffering, the U.S. stands to be pummeled especially hard by severe weather and the fluctuations of a changing climate. A warm pool in the North Pacific is creating a ridge of high pressure that’s bending the jet stream and its wet winter storms away from California, leaving the Southwest dry, said Jennifer Francis, a senior scientist with the Woodwell Climate Research Center.

Missing Arctic sea ice due to climate change could well be fueling that ridge. The entire mechanism got a boost this year because there was a La Niña in the Pacific, which tends to favor a drier California and West.

“Losing ice in this area allows the ocean to absorb extra heat during the summer, which is released into the atmosphere during fall and winter,” Francis said in a March interview. “That extra heat is what beefs up the ridge that fuels the drought.” 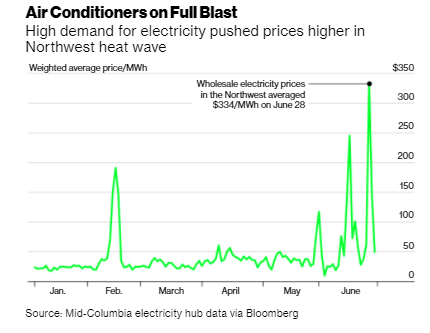 Across 11 western states, more than 98% of the land is abnormally dry, and drought has taken hold across more than 93%, according to the U.S. Drought Monitor. Conditions are so dry, the wildfire threat has arrived in many places a month early, Gina Palma, a U.S. Department of Agriculture forecaster said in June.

The threat is forecast to be above normal from the Pacific Northwest down the Rocky Mountains in the east and the coastal and Sierra Nevada ranges in California come July, according to the National Interagency Fire Center. In August that danger zone will spread across Montana and into North Dakota and South Dakota. This comes a year after record fires charred California and Colorado.

Through June 29, more than 30,000 wildfires had sparked this year across the U.S., up 25% from this point in 2020. They've burned more than 1.4 million acres, according to the National Interagency Fire Center, the same amount as last year and less than the average acreage of just under 2.1 million.

On the opposite side of the country, from the Gulf of Mexico to the Gulf of Maine, people are grappling with what will be another over-active hurricane season. The same goes for populations in the Caribbean, Central America, and Canada. While 2021 isn’t forecast to reach the 30-storm record of 2020, the season will likely produce more than the 14-system average. Five have already spun up in the Atlantic. 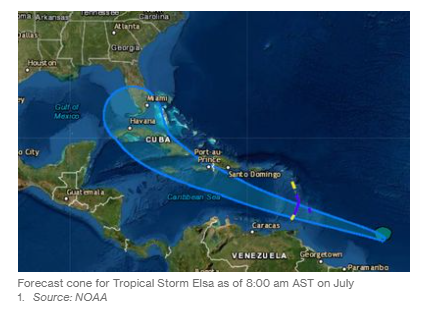 “This season is off to a fast start,” said Phil Klotzbach, lead author of the Colorado State University seasonal hurricane forecast. “While in general, early season activity isn’t much of a harbinger of what may come later in the season, if we get storms forming in the eastern and central tropical Atlantic prior to August, that is typically a harbinger of a very active season.”

On Thursday, Tropical Storm Elsa Thursday formed about 700 miles east of the Windward Islands, which include the nations Dominica, Grenada, and Martinique—exactly in Klotzbach’s area of concern.

Overall, water temperatures in the Atlantic are above average and typical of what you would see in an active year, Klotzbach said.

A New Model for the Future of Work, Liveability and Sustainability

Many parts of the Caribbean, Central America and the U.S. are still trying to recover from past hurricane seasons. Louisiana, and Honduras and Nicaragua, were all hit by back-to-back hurricanes in 2020, with hurricanes Iota and Eta leaving hundreds dead in Central America. The storms caused $3 billion in damage to Honduras, Guatemala, and Nicaragua, according to UN and government estimates.

“Climate change is compounding the misery of people living in these vulnerable communities,” Tom Cotter, director of emergency response and preparedness at Project HOPE, a Virginia-based humanitarian organization, said in an interview in May.

Arctic warming is having a global impact

Temperatures may run above normal in much of the western and northern U.S., across eastern Europe and into the Middle East through August, according to the forecast by Columbia University’s International Research Institute for Climate and Society. But the biggest deviations toward warming will be in Greenland and along Russia’s Arctic Ocean coastline, a trend long seen by scientists. 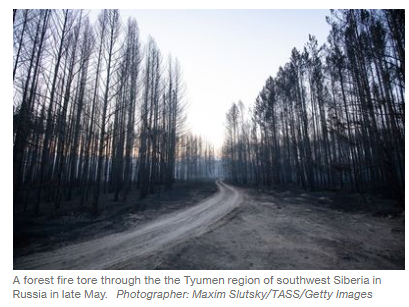 That warmth at the Arctic coast is a problem, Cohen said. Research indicates the sharp divide in temperatures between the Arctic Ocean, which still retains some of its ice, and the very warm shoreline drags the jet stream far to the north.

Because the far north is so warm, the contrast between temperatures there and at the equator is less than it used to be, which weakens the weather patterns. In between the pole and the equator is “no man’s land, so these heat domes get trapped in between,” Cohen said.

Heat domes are mountains of high pressure that bring extreme temperatures. It was a heat dome that baked Portland, causing it to break its all-time temperature record three days in a row. In Canada, Lytton Area in British Columbia posted the nation’s highest temperatures ever on Sunday, Monday, and Tuesday. The final mark reached 121 degrees—warmer than Dallas, Texas has ever been. 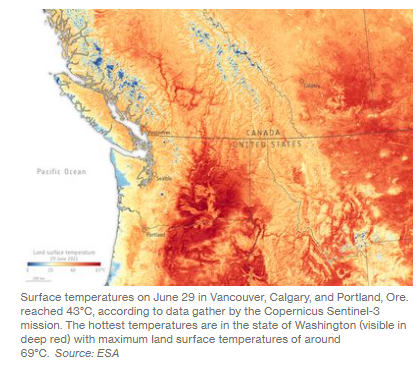 “It’s mind-boggling,” said Daniel Swain, a climate scientist at the University of California Los Angeles. “And I say that as a meteorologist, as well as a climate scientist. It is incredible to see these particular places get so hot on so many consecutive days.”

It isn’t just Canada and the U.S. that have cooked in the last few weeks. Moscow posted its warmest June day since the time of Czar Nicholas II. Taiwan faces its worst drought as well, which drove up food prices and threatened chip makers. The United Arab Emirates sweltered through a high of 125 degrees Fahrenheit (52 Celsius) only to be bested by a 128-degree reading in California’s Death Valley two weeks ago. And another heat dome is baking the Caspian Sea, where records are expected to fall.

The harmful effects of heat take many forms

Kimberly McMahon, public weather services program manager for the U.S. National Weather Service, calls heat “the silent killer. It is not something visual like a tornado or a hurricane.” 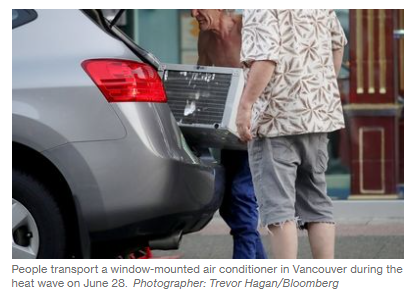 Even when it doesn’t kill, it makes life significantly harder. Power lines can’t transmit as much electricity in extremely hot conditions. Airplanes can’t carry as much weight because the air is less dense. Roads buckle, as happened in Oregon and Washington this week, McMahon said.

While there isn’t a completed investigation into the Pacific Northwest heat dome’s provenance, climate change is its likely parent.

“Without human-induced climate change, it would have been almost impossible to hit such record-breaking mean June temperatures in the western United States,” said Nikos Christidis, a climate scientist with the U.K. Met Office. “The chances of natural occurrence is once in every tens of thousands of years.”

(An earlier version corrected the timing of China blackouts in the first paragraph.)