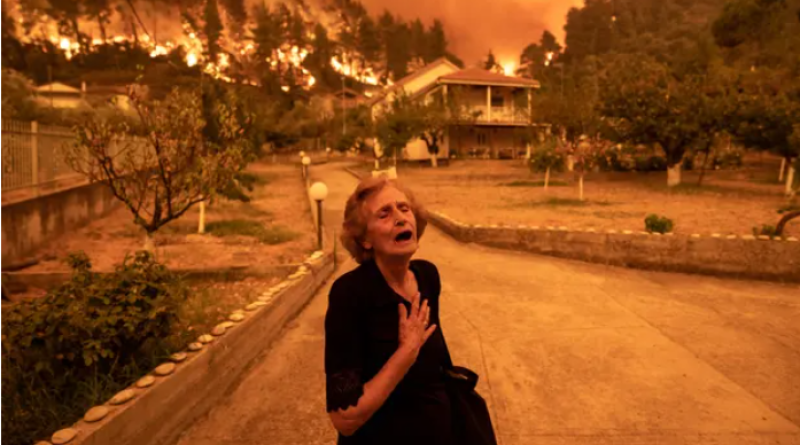 It was a stunning, grisly act. A man, a climate activist and Buddhist, had set himself on fire on the steps of the US supreme court. He sat upright and didn’t immediately scream despite the agony. Police officers desperately plunged nearby orange traffic cones into the court’s marbled fountain and hurled water at him. It wasn’t enough to save him.

The death of Wynn Bruce, a 50-year-old photographer who lived in Boulder, Colorado, was a shock to those who knew him. “It was so upsetting,” said April Lyons, a psychotherapist who knew Bruce from a therapeutic dance class they both took. “He was a solid person, a compassionate, kind person. We had no idea he’d do this.”

Bruce’s father, Douglas, said he was sure the self-immolation – on 22 April, which is Earth Day – was “a fearless act of compassion about his concern for the environment”. There is no explicit evidence of this, although Bruce had posted a fire emoji to Facebook along with the Earth Day date of his upcoming suicide.

To some, though, the terrible act was an indication of the curdling anguish that many people now harbor over the escalating climate crisis. Bruce’s death felt hauntingly familiar.

Four years ago nearly to the exact date, David Buckel, a civil rights lawyer, walked to New York City’s Prospect Park early one morning, doused himself with gasoline and set himself alight. Unlike Bruce, Buckel, who was 60, left a two-page note emailed to media outlets minutes before his death stating that “my early death by fossil fuel reflects what we are doing to ourselves.”

Bruce’s death “did make me think of what David did and also the incredible pain this sort of act causes the people who love them”, said Terry Kaelber, who was Buckel’s husband. The duo were vegetarians and dutifully did their recycling. Buckel, a keen composter, had become somewhat agitated about environmental depredation. “You can never expect this, though,” said Kaelber. “My heart pours out to Wynn’s family.”

The deaths also provoked a sense of frustration that such horrific acts are not only contemplated, but then have an ephemeral impact when they do occur. Kaelber said that after the flowers of condolence were cleared from near the scorched grass of Prospect Park, some climate activists took to wearing red ribbons to remind others of Buckel’s sacrifice. But that, too, soon faded.

“We have no leaders on this issue, none, no one,” Kaelber said. “So I get the despair people have but the answer isn’t to do what they did. They could’ve had more impact joining with people who are driving for change. Imagine if Wynn had chained himself and 100 Buddhists to the gates of the supreme court instead.

“They think doing this will galvanize people, and maybe it will a few people, but my first thought with Wynn was that no one on the supreme court will care. It will just be this passing thing in the media. It’s tragic.”

Few people worried about the climate crisis are driven to self-harm over it, of course, let alone set themselves aflame in an echo of Thich Quang Duc, the Vietnamese monk who self-immolated in protest against the persecution of Buddhists in 1963.

Instead, climate activists have marched in huge numbers, joined divestment campaigns, glued themselves to roads and chained themselves to oil drilling equipment. “It’s just so clear to me that I have to take this stand,” said Peter Kalmus, a Nasa climate scientist as he handcuffed himself to a JPMorgan Chase building during a protest in Los Angeles last month. “We are heading towards fucking catastrophe – we are going to lose everything.”

Yet most of us who fret about climate change do so discreetly. Studies have shown that while alarm over worsening wildfires, droughts, flooding and societal unrest is on the rise, not many of us talk about climate angst with others, to avoid political arguments or simply avoid bringing down the mood.

Those who do speak out are often younger activists – research has shown that half of people between 16 and 25 years old believe the Earth may be doomed, while three-quarters feel anxiety when they think or hear about climate change. Some speak openly of not wanting to bring children into a hotter, harsher world.

“Living in climate truth is like living in a nightmare. It’s absolutely horrible and I can understand why the vast majority of Americans don’t do it,” said Margaret Klein Salamon, a clinical psychologist turned climate activist. “But the worst part is that everyone’s acting normal – it’s like we are zombies. The sense of helplessness and hopelessness is holding back conversations and political action.”

Salamon leads an organization, called the Climate Awakening, that facilitates “climate emotions conversations” both in-person and virtually that encourage people to open up about their climate fears. Salamon said that many describe living in a sort of waking, powerless nightmare where an obvious catastrophe is unfolding but society just blithely ignores it.

“Some people have described it as like they are at a funeral but everyone else is treating it like a party,” said Salamon. “People are still going to college, planning for retirement, doing all the things as if the future will look just like the past when we know that’s not true. There’s a delusion of normalcy.”

There are regular attempts to jolt us free from political inertia, whether that’s the increasingly exasperated excoriations of the Swedish school striker turned movement leader Greta Thunberg, the soaring success of the Netflix film Don’t Look Up, which satirized the blase attitude of politicians and the media toward scientific warnings, or the increasingly frantic pronouncements of António Guterres, the secretary general of the United Nations, who has said continuing use of fossil fuels is “madness” and the work of “dangerous radicals”.

This desire to shake people from a pall of complacency may have also motivated Bruce and Buckel, although Susan Clayton, a professor of psychology and environmental studies at the College of Wooster, cautions it’s risky to assume the full motivations behind a suicide. As social creatures who feed off each other’s cues, however, we are all affected by what Clayton calls “collective ignorance”.

“If there’s a fire and we look around us and see no one is doing anything, you can feel you are also expected to do nothing, not realizing that other people are looking to you for the same reason,” she said. “There’s this sense that people around us are not only doing nothing about this problem, but not even acting like it’s important.”

For all the efforts of various activists, and promises by governments to restrain dangerous global heating, carbon emissions leapt globally last year as we reverted back to the polluting status quo before Covid lockdowns. Wildfires are now a year-round menace to the US west. On Friday, it hit 51C in Pakistan, while India has baked in such extreme, record heat that dozens of people have died and birds are falling from the sky.

The UN has warned that a broken perception of risk based on “optimism, underestimation and invincibility” is fueling such disasters. Oil and gas companies are planning, unhindered, a massive tranche of “carbon bomb” drilling projects that will propel us firmly towards climate catastrophe.

There is much to be anxious of, but some climate scientists argue we cannot let a wave of “doomerism” become paralyzing. There is still hope that concerted action will avoid the worst, that momentum is building for a cleaner, greener world. Activism is a good release valve for climate worries, Clayton said, not only to help confront the problem but as a forum to speak to others with similar concerns.

“Climate doomerism can be harmful, because it robs us of agency, the agency we still have in determining our future,” said Michael Mann, a climate scientist at Penn State University. “I fear that doomism and defeatism leads us down the path of inaction, or worse.

“It would be much better for folks to channel those emotions toward the common goal of speaking truth to power and holding our policymakers accountable for addressing the mounting climate crisis.”

To little public fanfare, two memorials were held for Wynn Bruce last week, one in Boulder and one in Minnesota, where his father still lives. Attendees spoke of his kindness and friendship. The media had noted the manner of his death as a terrible curiosity, rather than dig into his motivations, and quickly moved on to other topics. The planet continued to heat up.

“I don’t believe David or Wynn’s acts will drive change but maybe I’m wrong, and God bless them if it does,” said Kaelber. “But it really is no way to do things. There is a better way.”

UN report to lay out options to halt climate crisis