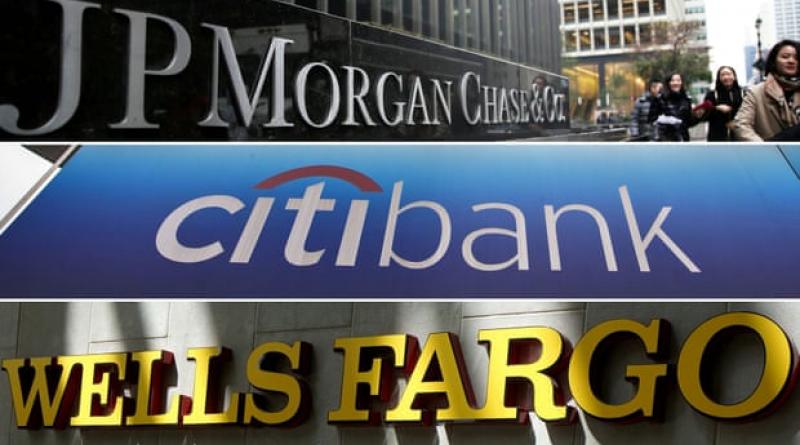 Analysis of 35 leading investment banks shows financing of more than $2.66tn for fossil fuel industries since the Paris agreement.

The world’s largest investment banks have funnelled more than £2.2tn ($2.66tn) into fossil fuels since the Paris agreement, new figures show, prompting warnings they are failing to respond to the climate crisis.

The US bank JP Morgan Chase, whose economists warned that the climate crisis threatens the survival of humanity last month, has been the largest financier of fossil fuels in the four years since the agreement, providing over £220bn of financial services to extract oil, gas and coal.

Analysis of the 35 leading global investment banks, by an alliance of US-based environmental groups, said that financing for the companies most aggressively expanding in new fossil fuel extraction since the Paris agreement has surged by nearly 40% in the last year.

Using Bloomberg financial data and other sources to analyse loans, equity issuances and debt underwriting services from 2016 to 2019, the analysis is published on Wednesday in the Banking on Climate Change 2020 report.

Although the last 12 months has seen many investment banks announce financing restrictions on coal, Arctic oil and gas, and tar sands extraction, the report warns that the business practices of financial institutions are not aligned with the Paris agreement.

Alongside JP Morgan Chase, the US banks Wells Fargo, Citi and Bank of America dominate financing for fossil fuels, accounting for nearly a third of the £2.2tn of financial services since the Paris agreement, according to the report.

The report said big banks overall have increased their funding in the four years since Paris to companies with significant Arctic oil and gas reserves.

Alison Kirsch, a researcher at Rainforest Action Network who led the analysis in the report, said: “The data reveal that global banks are not only ramping up financing of fossil fuels overall, but are also increasing funding for the companies most responsible for fossil fuel expansion.” 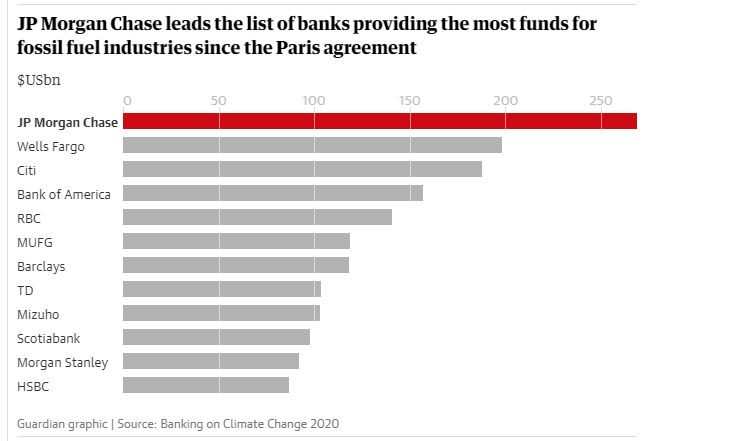 Barclays, which has been under increasing investor pressure over its environmental stance, has been the top European financier of fossil fuels in the last four years, the figures show. Last year, the London-based bank was the largest financier of Arctic oil and gas, according to the figures.

A group of influential shareholders are now urging the bank to phase out lending to fossil fuel companies, and have filed a resolution to be voted on at Barclays’ AGM in May.

Fracking has been the focus of intense business activity by investment banks since the Paris agreement, with JP Morgan Chase, Wells Fargo and Bank of America leading £241.53bn of financing, much of it linked to the Permian basin in Texas.

The big-four Chinese banks have dominated financing for coal mining and coal power since the Paris agreement and have no policies restricting business practices.

Kirsch said: “This makes it crystal clear that banks are failing miserably when it comes to responding to the urgency of the climate crisis. As the toll of death and destruction from unprecedented floods, droughts, fires and storms grows, it is unconscionable and outrageous for banks to be approving new loans and raising capital for the companies that are pushing hardest to increase carbon emissions.”

Ahead of the next major international climate talks, Cop26 in Glasgow this November, the UK government has sought to make the business and the banking sector the focus of tacking the climate crisis. The former head of the Bank of England Mark Carney has been appointed as a climate envoy, warning that businesses must improve how they disclose their impact on the environment or risk failing to meet climate targets.

Johan Frijns, director of BankTrack, an NGO which monitors the activities of major financial institutions, said it was time for banks to commit to phasing out financing for all new fossil fuel projects.

“In the last year, banks have been queueing up to proclaim support for the goals of the Paris agreement. Both the Principles for Responsible Banking and the new Equator Principles, each signed by over a hundred banks, acknowledges the global climate goals. Yet the data in Banking on Climate Change 2020 show these laudable pledges making little difference, and bank financing for the fossil fuel industry continuing to lead us to the climate abyss,” he said.

“It is high time banks recognised that reaching the Paris climate goals requires an immediate end to finance for all new fossil fuel projects, and a rapid phase-out of existing fossil finance. This should be the Global Glasgow Goal for all banks.”

The bank looked forward, it said, to growing “its impact over time”.

A Barclays spokesperson said: “We are working hard to help tackle climate change including facilitating £34.8bn of social and environmental financing last year. We continue to engage with ShareAction and other stakeholders on how we can make further progress.”

Wells Fargo told the Guardian that it believes that climate change is one of the most urgent environmental and social issues of our time, and is committing to a low-carbon economy. The bank said it is working to measure and report on the carbon intensity of its credit portfolio.

A Bank of America spokesperson said they recognise their role in managing climate risk and in financing the transition to a low-carbon economy.

Citigroup did not respond when contacted by the Guardian for comment.