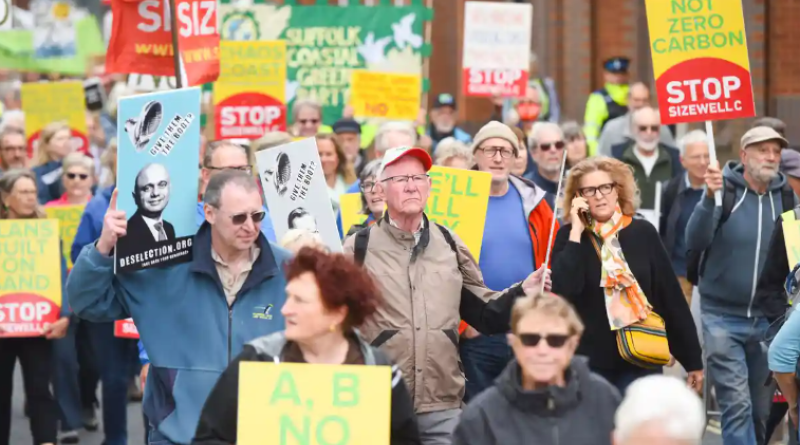 Campaigners have begun a legal challenge against the government’s decision to give the Sizewell C nuclear power station the go-ahead amid warnings that UK nuclear plants will be on the frontline of climate breakdown.

Citing the threat to water supplies in an area officially designated as seriously water stressed, the threats to coastal areas from climate change and environmental damage, the challenge is the first step in a judicial review of the planning consent.

The business secretary, Kwasi Kwarteng, overruled the independent Planning Inspectorate to grant permission for the new nuclear reactor in Suffolk in July. Kwarteng is pushing ahead with government plans to approve one new nuclear reactor a year as part of an energy strategy that aims to bolster the UK’s nuclear capacity, with the hope that by 2050 up to 25% of projected energy demand will come from it.

But Sizewell C has faced stiff opposition from local campaigners, and environmental groups both for its cost and the environmental impact.

In a letter to Kwarteng outlining their legal challenge Together Against Sizewell C (TASC) argues that the permission by the government for the plant was given unlawfully. Represented by Leigh Day solicitors and supported by Friends of the Earth, the group says there was a failure to assess the implications of the project as a whole, by ignoring the issue of whether a permanent water supply could be secured, a failure to assess the environmental impact of that project and the suggestion that the site would be clear of nuclear material by 2140, which was not upheld by evidence showing highly radioactive waste would have to be stored on site until a much later date.

The Planning Inspectorate had rejected the scheme saying “unless the outstanding water supply strategy can be resolved and sufficient information provided to enable the secretary of state to carry out his obligations under the Habitats Regulations, the case for an order granting development consent for the application is not made out”.

Pete Wilkinson, chair of TASC, said: “The case against Sizewell C is overwhelming, as has been carefully documented throughout the inquiry stage and was found by the planning inspector to have merit.

“Even to consider building a £20bn-plus nuclear power plant without first securing a water supply is a measure of the fixation this government has for nuclear power and its panic in making progress towards an energy policy which is as unachievable as it is inappropriate for the 21st-century challenges we face.”

The risk to UK nuclear facilities from climate change has been outlined by Dr Paul Dorfman, an academic at the Science Policy Research Unit at the University of Sussex, and the chair of the Nuclear Consulting Group. He warns the UK’s coastal nuclear facilities are on the frontline of climate breakdown and some may have to be abandoned in the face of the threat. Dorfman said: “It’s clear that the Suffolk coast by the proposed Sizewell C nuclear plant is fragile, vulnerable to erosion and climate-driven storm surge. It looks like the site will be almost entirely cut off by flood water at least once per year, and much sooner than models predict.”

Sizewell C is expected to cost £20bn and would be paid for with a surcharge on customer energy bills as well as £1.7bn of taxpayers’ money.

Experts on nuclear waste disposal who advise government say no new nuclear plants should be built until a permanent disposal dump has been built. But a site for a permanent waste facility has yet to be identified, and is unlikely to be ready until the late 2040s at the earliest, if there is agreement on where it should be sited.

Rowan Smith, the solicitor representing TASC, said: “We are proud to represent TASC in the local community’s continued fight to help protect Suffolk’s heritage coast and wildlife sites. Our client is understandably shocked that the secretary of state has gone against the considered and reasoned view of the independent planning inspectorate and granted development consent in a potentially legally flawed manner. TASC has very real concerns that the environmental impacts of Sizewell C have not been properly assessed. If the secretary of state does not see the error of his ways, then we intend to do all we can to bring this to the court’s attention.”

The government said in granting the permission for Sizewell C that a very substantial and urgent need to build the plant outweighed the environmental harms.

EDF worked with Chinese state-backed nuclear specialist CGN on the first phase of the project. But the UK government is keen to ease CGN out because of concerns about Chinese involvement in sensitive assets. Boris Johnson’s government has already put up £100m of funding this year to support its development.

Bankers at Barclays have been hired to secure new financial backing for the project alongside EDF and the UK government.