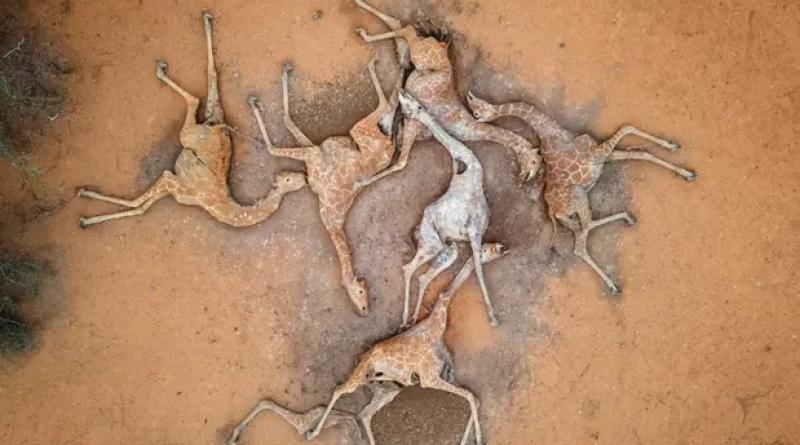 Six dead giraffes lie in a spiral on the dry earth, their bodies emaciated and interwoven. The aerial shot, taken by the photojournalist Ed Ram, shows the devastation of Kenya’s drought, which has left people and animals struggling for food and water.

Already weak, the animals had died after they got stuck in the mud, according to Getty Images. They were trying to reach a nearby reservoir, although it had almost dried up, the agency reported.

The carcasses were moved to the outskirts of Eyrib village in Wajir County to prevent contamination of the reservoir water.

It is not just animals that are at risk. An estimated 2.1 million Kenyans were facing starvation due to severe drought across half the state, the country’s drought management authority warned in September.

On Tuesday, the UN said 2.9 million people were still in urgent need of humanitarian assistance. Some areas of Kenya had recently reported their worst rainfall in decades, it said.

“Water sources for both people and livestock have dried up, forcing families to walk longer distances and causing tensions among communities, which has led to an increase in intercommunal conflict,” the UN Office for the Coordination of Humanitarian Affairs said in its assessment.

Separately, the local Star news website reported that 4,000 giraffes risked being wiped out by the drought.

Ibrahim Ali, from the Bour-Algi giraffe sanctuary, told the Star the situation had worsened due to farming along rivers, which blocked wildlife from drinking spots.

The drought ravaging East African wildlife and livestock. WARNING: This video contains images of dead animals which some people may find distressing.