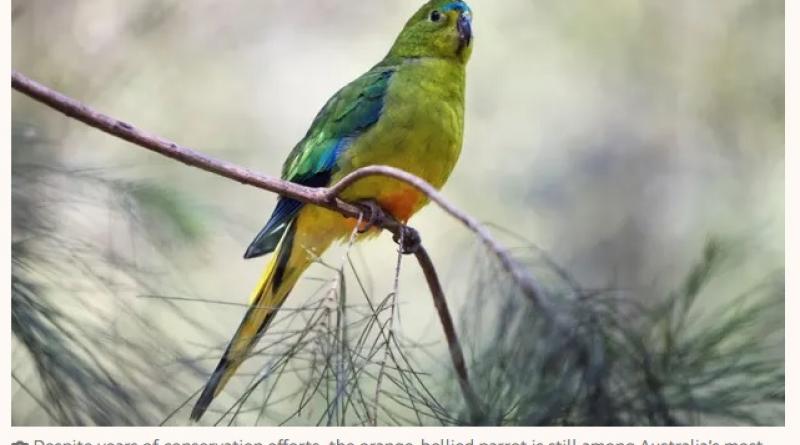 A landmark study has found one in six Australian birds are now threatened. Here are some of the species most likely to be headed to a museum, unless more is done.

There seems to be a perversity to human nature, in that we don’t really care about wild creatures until there are so few left that we can put a name to them. Think Martha, the last passenger pigeon, or the haunting images of Benjamin the last thylacine, pacing around its cage at Hobart zoo in 1936.

The Action Plan for Australian Birds 2020 (released this week by CSIRO Publishing) bandies a lot of names of birds you may never have heard of, which are now classified as on the path to extinction – 214 to be exact, around one in six of Australia’s bird species and subspecies. It can all be too much to take in. So here is a guide to six birds of which there are so few left in the wild that we could easily remember them all if they had individual names. 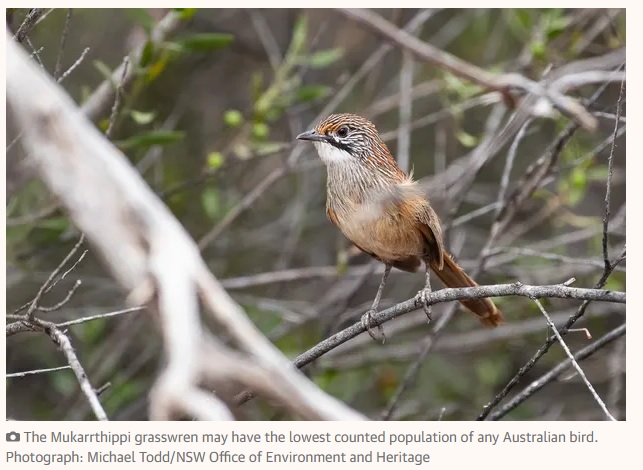 While there are several birds, such as Coxen’s fig-parrot or the Tiwi hooded robin, that we can’t unequivocally prove still exist, the candidate for the lowest population of any Australian bird that we can count is this obscure little bird that streaks between spiky clumps of spinifex in a small area of mallee in the Cobar shire of western NSW.

Only officially identified in 2020 as a distinct subspecies of the more widespread striated grasswren (itself a threatened bird), the Mukkarthippi grasswren (pronounced mook-wah-tippy and meaning small bird of the spinifex in the local Ngiyampaa language) has only three or four pairs definitely known to survive and a total estimated population of not more than 20 birds. 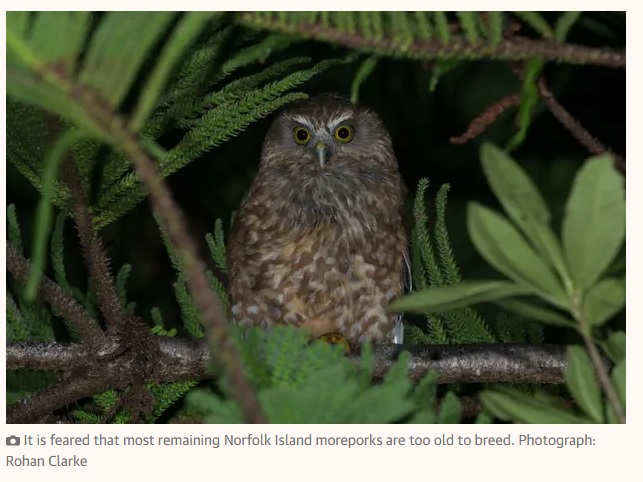 This small owl got as near to extinction as is possible to go, with only one female bird left on the entire island by 1988. The introduction of some males of its closest relative, the New Zealand morepork, saw a hybrid population develop to the extent that by 2019 there were thought to be between 25 and 50 birds on the island. However, only four pairs were known and since 2008 there have only been two successful breeding events observed. It is feared that most of the remaining birds are too old to breed, though the successful rearing of two chicks in 2019 gives some cause for hope. 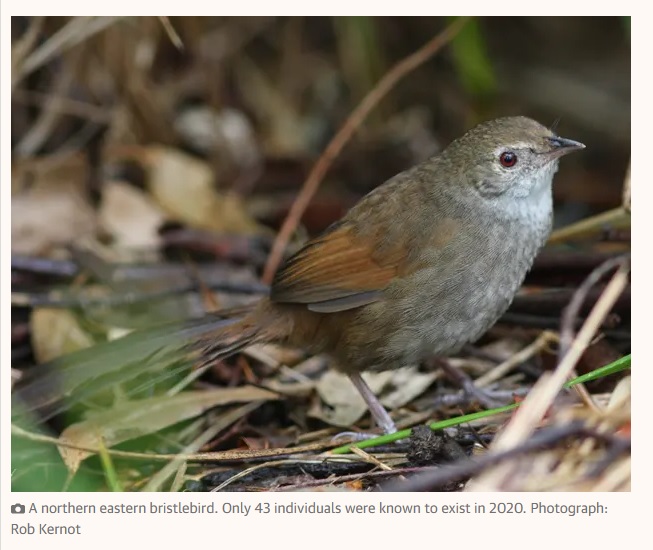 While the southern subspecies of the eastern bristlebird has responded well to active conservation measures, its northern cousin has not been so lucky. In 2020 only 43 birds were known to exist, though a couple more may have been seen since then. This was up from a maximum of 30 reported in the 2010 action plan. It was feared all these gains were at risk in the 2019-20 bushfires, as these poor flyers often succumb to intense, large fires. (Though they do benefit from regular, small-intensity burns.) Fortunately, it seems the fires missed almost all remaining birds and the northern eastern bristlebird lives to scurry through the undergrowth another day. 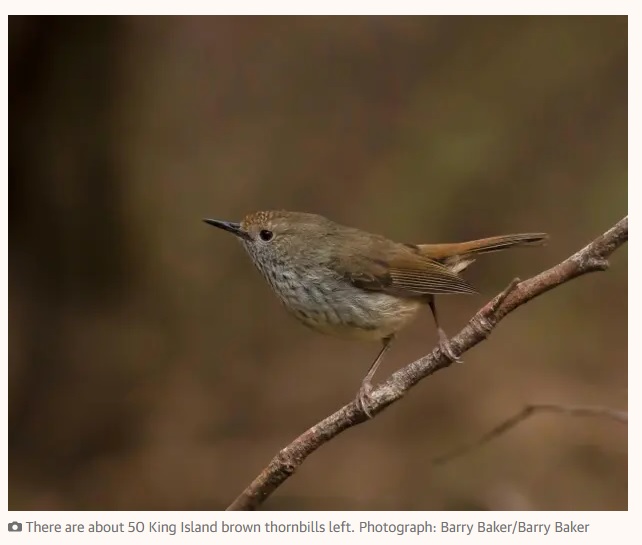 Listed as the Australian bird most likely to become extinct in 2018, this unobtrusive little brown bird hadn’t been seen in a long time, until birdwatchers bumped into a couple around 2014. BirdLife Australia organised targeted searches and habitat assessments, initially by ANU researchers, which discovered about 50 remaining birds living across more of the island than the one small forest patch they were thought to have survived in. However, this good news is tinged with dread, as many of the new sites are in small patches on private land, all of which could be cleared due to a relaxation of vegetation protection laws. 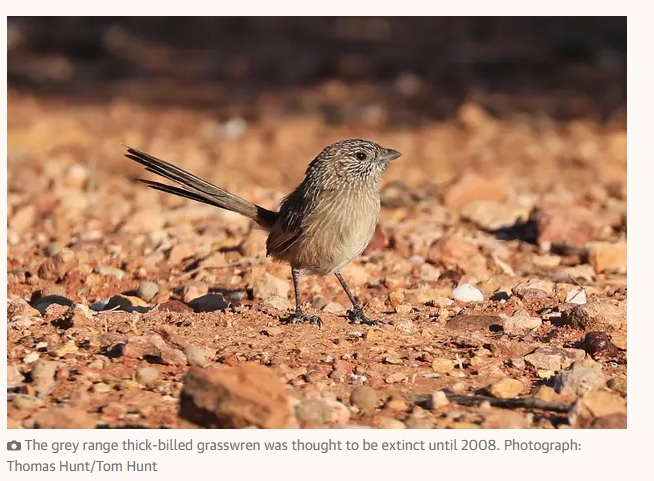 This small, obscure, grey-brown ghost of the dusty saltbush plains of far western NSW was long thought extinct. Only rediscovered in 2008, the outlook was not rosy by the time of the 2010 action plan, with as few as five birds estimated to exist. Spurred by this grim scenario, BirdLife Australia funded an intense search effort – which met with success, with almost 60 birds now known to exist. But it is not out of the woods (saltbush) yet, as it faces threats from mining developments on the few properties where it is known to survive. 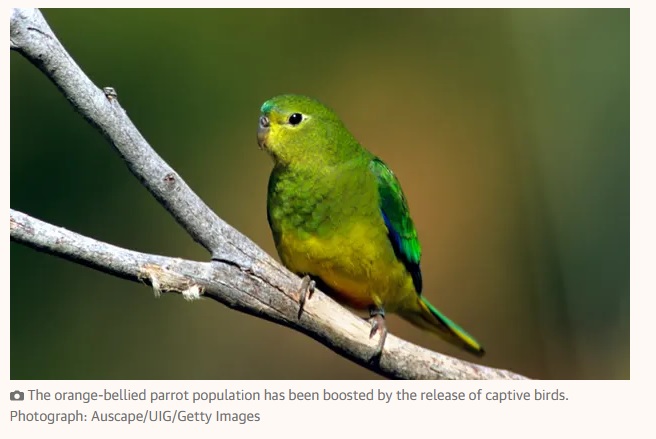 Possibly the most well-known of all our critically endangered birds, the orange-bellied parrot was the first Australian bird to have a recovery plan developed for it, back in 1984. Showing how conservation of extremely threatened species is a long game, by 2018 it was still considered the second most likely Australian bird to go extinct, after only two wild females successfully raised chicks in 2016 at their one remaining Tasmanian nesting site. However, things seemed to have finally turned the corner. After a couple of successful seasons, boosted by the release of dozens of captive-bred birds, 62 wild orange-bellied parrots have returned to the breeding grounds.