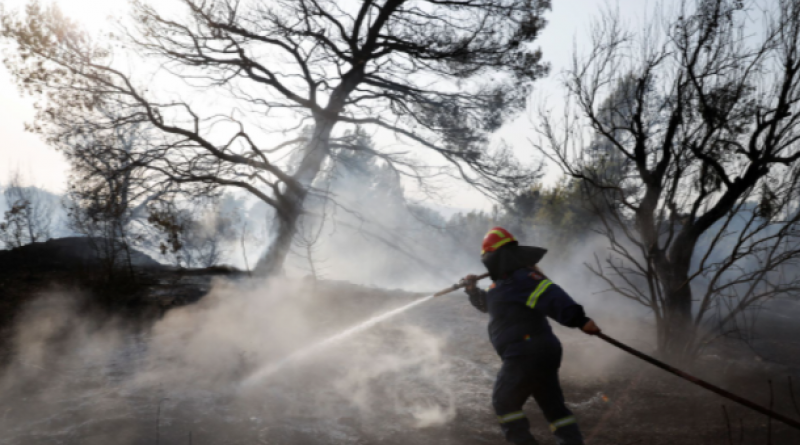 ATHENS, Aug 4 (Reuters) - Greek authorities ordered villages near the site of the ancient Olympic Games in the western Peloponnese to be evacuated on Wednesday as wildfires raged across the country, destroying swathes of forest and buildings, and sending hundreds fleeing.

Temperatures of more than 40 Celsius (104 Fahrenheit) and strong winds have fanned more than 150 wildfires in different areas of the country in recent days, adding to the conflagrations in Turkey and other areas of the Mediterranean. read more

"We are still fighting a titanic battle on many fronts," Deputy Civil Protection Minister Nikos Hardalias said during a briefing, "The next days will be more difficult."

A dozen villages were cleared near the archaeological site in the western Peloponnese region where the ancient Olympic Games were held, and around 160 firefighters, with water bombing aircraft battled to save the ancient treasures.

"We're doing our best to save this sacred place," local mayor Panagiotis Antonakopoulos, told television station Open TV. "After human lives our priority is to save our history."

The site, where the Olympic flame begins its journey to the city hosting the modern Olympics, is one of Greece's most popular tourist attractions. It was threatened by an earlier fire in 2007.

On the other side of the country, rescue boats off the island of Evia near Athens, picked up some 85 people from the beach as a wildfire engulfed the surrounding pine forests filling the sky with thick smoke.

"It was burning all night. The forest has been destroyed, villages were burned. We left behind our homes, we left our pets," Christina Katsini, a local resident, told Skai TV.

Reinforcements arrived from Cyprus, and firefighters from France and two aircraft from Sweden were expected by Thursday, a Civil Protection Authority spokesperson said but the country was braced for further battles in the days ahead.

Fires that had threatened houses on the northern outskirts of Athens on Tuesday eased slightly. But residents were told to stay indoors as a thick cloud of smoke hung over the city filling the air with harmful particles and the smell of burning.

"I saved my pets, that's why I stayed," said one Varympompi resident, Panagiotis, standing among burned cars and blackened pine trees. "I have goosebumps just talking about it; all the homes around me burned, nothing's left."