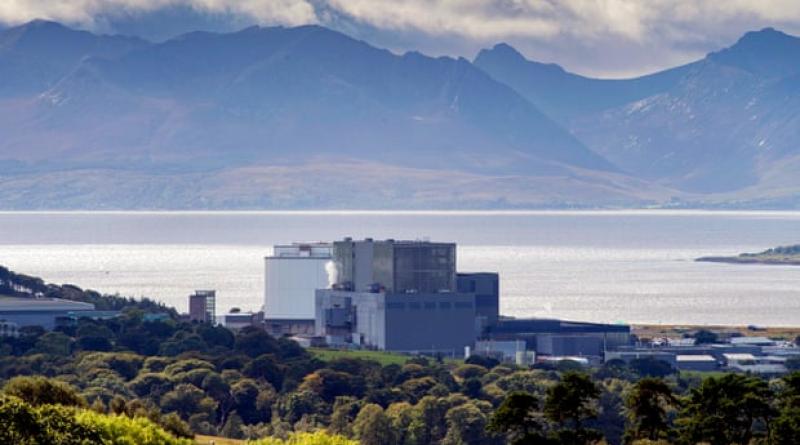 Exclusive: EDF Energy to close Hunterston next year after spending £200m on repairs.

Hunterston nuclear power station, one of the UK’s oldest remaining nuclear plants, is to close down next year, earlier than expected, after encountering a series of safety-critical problems in its reactors.

Industry sources told the Guardian that EDF Energy, the state-owned French operator of Hunterston, decided at a board meeting on Thursday afternoon that the plant would stop generating electricity in late 2021, at least two years earlier than planned.

The energy company had hoped to keep generating electricity from the 44-year-old nuclear plant on the Firth of Clyde until 2023, after ploughing more than £200m into repairing the reactor.

Hunterston, which first began generating electricity in 1976, has been offline since 2018 after inspectors discovered 350 microscopic cracks in the reactor’s graphite core.

In October last year the Ferret, an investigative website, reported that at least 58 fragments and pieces of debris had fallen off the graphite blocks as the cracks worsened. It quoted the Office for Nuclear Regulation (ONR) as saying this had created “significant uncertainty” about the risks of debris blocking channels for cooling the reactor and causing fuel cladding to melt.

After a two-year investigation, the ONR said on Thursday that reactor 3 at Hunterston would be allowed to restart as planned, but it would only be allowed to generate electricity for approximately six months.

EDF then plans to apply next spring to extend its life for one final six-month run. EDF said it would begin the process of decommissioning Hunterston no later than the first week of 2022.

EDF also operates Scotland’s second nuclear power station, Torness, on the east coast south of Edinburgh. Running since 1988, its two reactors can produce up to 1.2GW of electricity. It is due to remain operational until 2030 at the earliest.

Gary Smith, the regional secretary of the union GMB Scotland, said the job losses from the closure “would pose massive long-term challenges for what is quite a deprived area of Scotland. The Scottish government now has a huge problem with its energy policy: more imported gas will be burnt to keep the lights on. Renewables on their own won’t do that.”

The Scottish National party government in Edinburgh has an anti-nuclear policy but has backed efforts to extend the life of Hunterston and Torness, while phasing out coal-fired power stations and building up renewable sources in Scotland.

In 2016 Scotland’s two nuclear stations produced 43% of its electricity. In 2018, the year Hunterston went offline after the reactor cracks were uncovered, that fell to 28%.

Richard Dixon, the director of Friends of the Earth Scotland, said: “In terms of energy security, clearly there’s no problem. Its reactors haven’t been running and the lights haven’t gone out. What’s more urgent now is to build up renewables and energy efficiency, to make sure the gap left by Hunterston is filled by zero-carbon electricity or energy saving.”

Across the UK there are eight operational nuclear power plants, which generate a steady supply of electricity about two-thirds of the time. In total they supplied 18.7% of the UK’s electricity in 2018, down from just over 20% the year before. All but one are due to close within the next decade.

Tom Greatrex, the chief executive of the Nuclear Industry Association, said a nuclear programme would help create “tens of thousands of secure, skilled and well-paid jobs” while helping to meet the UK’s future electricity demand, which is projected to quadruple in the coming decades.

EDF said in a letter to the local community this month that it had invested more than £200m in investigating whether Hunterston’s graphite reactor would remain safe under a range of worst-case scenarios, including a one-in-10,000-years seismic event, which is much larger than the UK has ever recorded.