Responding to drought, hunger and climate change in Kenya. 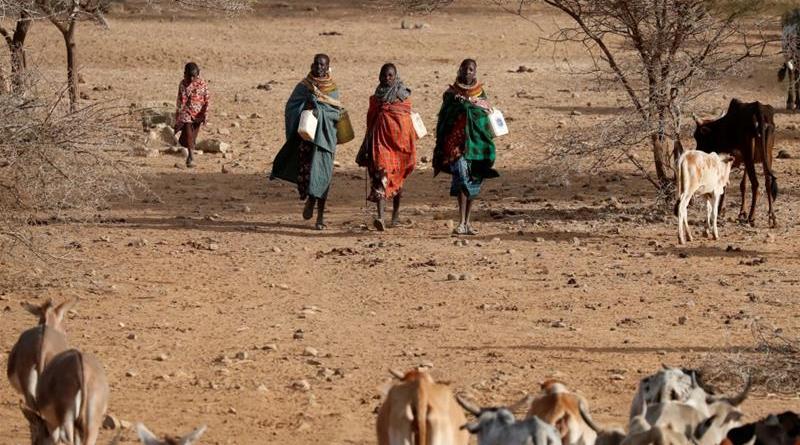 Kenya is experiencing severe drought, exacerbated by climate change. Trócaire is responding providing assistance to people who are struggling to provide their families with one meal a day.

“Everyone has problems but widows and orphans suffer most” says Elizabeth Arot, as she sits at a small wooden shack by the side of the main road. She sells dried fish, beans and small snacks in the small market town of Kataboi, beside lake Turkana in Northern Kenya.

The dry and arid Turkana region has been one of the worst affected areas by drought this year in Kenya. Over 3 million people across Kenya are in a crisis situation, and hunger is rife.

Elizabeth says that the drought has affected everyone in the village. She says drought "has brought starvation and hunger”. Pastoralists have migrated because they cannot sustain their livestock anymore. “They’ve gone to look for greener places”.

As a widow, Elizabeth struggles to provide for the children and grandchildren in her care. Her husband drowned while fishing on a canoe on lake Turkana, while he was trying to earn an income to feed their nine children. “I didn’t know how to go about life without him” says Elizabeth. She also lost a daughter to chronic disease, and is now taking care of her three orphaned grandchildren. With drought being common, she struggles to survive.

When Elizabeth was young, rains were more frequent and dependable. “If the rains continues to disappear” says Elizabeth, “even the lake will disappear one day. That means people are likely to suffer and then die.”

The Turkana people are predominately pastoralists, semi-nomadic people who move with their herds of goats and cattle as the seasons change. Some also carry out fishing – particularly those living close to the lake, like Elizabeth.

It is the poorest region of Kenya, with over 60% living in poverty. Most live a very traditional way of life, living in beehive huts made from grass and straw.

In early 2019 the "long rains" were supposed to come. There were two days of good rains, and that was it.

As a result, people have resorted to selling off their livestock, borrowing money to buy food, and taking children out of school because they can't afford the fees. Many pastoralists have seen their livestock die, and families are often struggling to provide their families with one meal a day.

As a result of the crisis, 59% of households in Turkana have poor consumption levels, and one in four people in Turkana are showing signs of acute malnutrition.

“I am very sad because water is life” says Elizabeth, “and if you don’t have water you can’t even cook food”.

Trócaire has responded to this year’s drought across Kenya, and particularly in Turkana, where we have provided emergency assistance to hundreds of affected households. We have supported those who are most vulnerable – orphans, pregnant women, child headed families, people living with HIV, people living with disabilities and widows like Elizabeth.

Trócaire’s local partner, Caritas Lodwar, provided Elizabeth with a small amount of cash assistance to help her family survive through the drought. As a result, she was able to purchase some food, pay for school fees and also medical fees for her children. She was also able to buy some fish to sell at her market stall to earn an income.

The project wouldn’t be possible without the generous support of the Irish government through Irish Aid.

Before the project, Elizabeth was struggling to provide one meal a day to her children and grandchildren. Some of them would sleep during the day because they had no energy. Now she can provide both lunch and supper, and the children are full of energy again.

“It makes me happy to see my children eating two meals a day” she says. She hopes that she can continue to sell fish and save some money, so that she can send the children to secondary school.

“I am proud of my children and grandchildren that surround me. Even when you’ve a lot of issues and stress, when you see them running around it makes you happy.”

ACTION FOR THE CLIMATE

As the planet continues to heat up, the future is extremely challenging for the people of Turkana. While global efforts on tackling climate change are focusing on keeping temperature rises to 1.5 degrees by 2030, one study has shown that Turkana has already experienced a 1.8 degree rise.

An increase of a few more degrees could turn Turkana into a desert.

Countries like Kenya have done little to contribute to the global problem of climate breakdown, yet are already experiencing these impacts. As drought, floods and other disasters like cyclones hit with increasing frequency, Trócaire continues to work in the countries most affected by this global problem.

For communities in Kenya, climate change is not some distant threat, it is here and now. For these communities, and many more around the world, our governments need to urgently take action and step up our ambition on climate change.