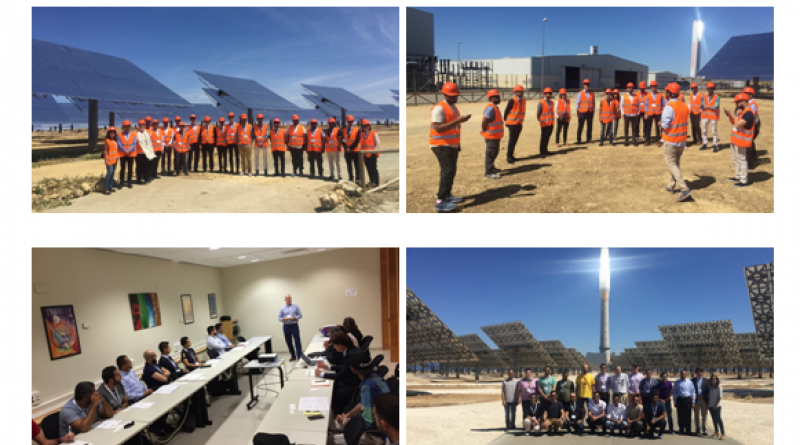 Experts of energy authorities and R&D organisations from the Gulf region are visiting solar thermal power sites in Spain this week in the framework of a 5–day study tour on “Solar thermal applications for the energy transition”. This initiative is organised by the EU GCC Clean Energy Technology Network, funded by the European Commission, in cooperation with CENER, the Network partner in Spain. The study tour aims to promote the exchange of experiences and know-how between the EU and the GCC on clean energy technologies and applications.

“If we want to be successful in our path towards sustainable energy we need everybody’s involvement. Exchange of expertise and best-practices in the framework of the EU-GCC parstnership is vital to tap all the potential of clean energy technologies. Initiatives as this "Study tour on solar thermal applications for the energy transition" organised by the EU GCC Clean Energy Technology Network foster closer technical and political cooperation between the EU and GCC countries.” said Ana Egea-Herrero, Policy Officer at the Directorate General for Energy, European Commission in her welcome address during the introductory workshop in Seville on 10 June.

The GCC region’s energy sector is experiencing rapid change, with a shift towards cleaner energy in the framework of the energy transition. Policy makers and utilities are increasingly aware of this potential, and high-profile renewable power initiatives have been launched along with ambitious plans.

“Concentrated solar power (CSP) has recently emerged as a cost-effective enabler of the energy transition in the MENA region. Advancements in the cost structure of projects and smart combinations with solar PV, as seen in Dubai and Morocco, have turned CSP into a real alternative to fossil fuel based dispatchable power.” noted Frank Wouters, Director of the EU GCC Clean Energy Technology Network.”No Gulf country can do without CSP in the mix and Europe’s knowledge and experience make it a natural partner to the Gulf countries” added Frank Wouters.

The GCC delegation consists of more than 15 delegates from Saudi Arabia, the United Arab Emirates, Kuwait and Qatar.
“We are delighted to support the organisation of this study tour in Spain. This is a great opportunity for GCC delegates not only to learn about the status of commercial CSP plants in Europe and R&D projects and capabilities but also to look at the energy transition from an open perspective. This will enhance and boost the collaboration between GCC and EU countries in this area to meet the global challenges for sustainable development.” said Dr. Marcelino Sanchez, Director of the Solar Thermal Energy Department in CENER.

The agenda consists of training workshops as well as visits to state-of-the-art industrial and research facilities in Seville, Almeria and Madrid, including Abengoa’s Solucar Platform, Torresol’s Gemasolar, CIEMAT’s Plataforma Solar de Almeria, IMDEA, Acciona. Workshops will focus on Dispatchability for the Energy Transition, on the EU GCC CSP Alliance Initiative and on the role of R&D for CSP Deployment among other topics.