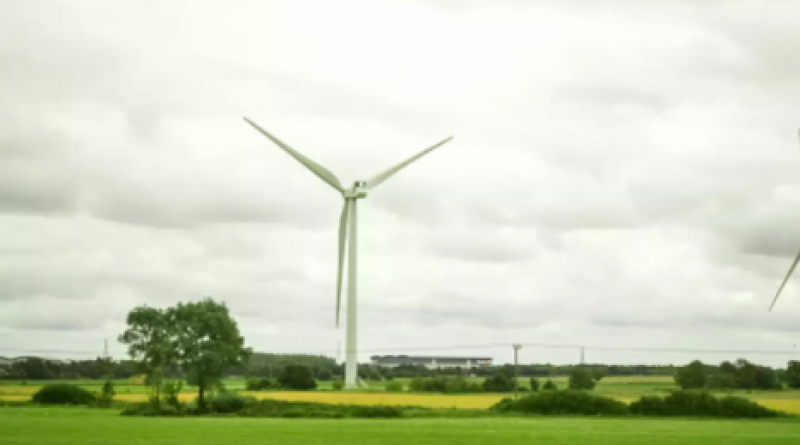 Wind capacity commissioning has been moving at a snail’s place in the last four years with less than 2 gigawatts (GW) of annual capacity additions. This is significantly off-track from the 11-12GW needed annually to reach the target of 140GW of wind power capacity by 2030, to drive the transition to a cleaner, cheaper and profitable energy system.

Land availability and acquisition have been the most critical issues delaying the commissioning of the more than 9GW of already auctioned wind power capacity. Sites with top wind power density (WPD) of above 300(W/m) and wind speeds above 6.4m/s are limited – the majority are located in the states of Tamil Nadu and Gujarat. These sites are national assets, especially given India’s ambition to build 140GW of wind power capacity by 2030.

Roughly a quarter (10.5GW) of India’s 39.2GW of installed wind capacity was commissioned with wind turbine sizes of under 1 megawatt (MW), according to a recent report on wind repowering by Idam Infrastructure Advisory Private Limited. Most of these older and smaller turbines occupy the top wind sites, underleveraging the country’s top renewable energy resource. 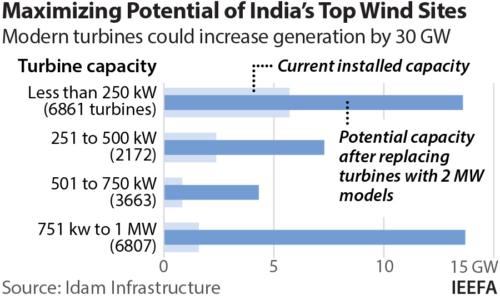 Rotor diameters of modern wind turbines are up to 140m compared to 80-100m for the older turbines. Hub heights have also increased to up to 160m from 60-100m. Modern turbines would provide better availability of about 98%.

Combining all these advancements in technology would improve capacity utilisation rates to 35-40%, doubling wind generation compared to older turbines. Also, reduced operations and maintenance costs (O&M) on the newer turbines would improve the return on investment.

For the European wind industry, the model of repowering is nothing new. Germany, Denmark, Spain and the Netherlands combined have more than 100GW of wind power capacity.

Wind turbines with a total output of about 4GW will reach the end of the funding period (20 years) by 2025 and will no longer benefit from Germany’s federal feed-in tariff (FiT). The German wind industry has urged the government to restructure the permitting and repowering framework to further boost its wind power industry.

Legacy PPAs
Legacy power purchase agreements (PPAs) bound with the old assets are one of the biggest challenges. The tariffs of these PPAs are too low to justify the investment required for repowering. And higher tariffs might not be acceptable to the distribution companies (Discoms) or captive off-takers while the older PPAs are still valid.

Ownership of turbines and land
There are multiple owners of wind turbines within the same wind farms. Many of these owners commissioned their projects prior to 2002, and own one or more turbines of capacity less than 500 kW.

By repowering older turbines with larger capacities, the number of turbines for a particular size would reduce. This creates a challenge to reorganise the ownership of capacity or the turbines. Similarly, the land parcels for a given windfarm may be jointly owned. A repowering initiative would require negotiation of lease or sell arrangements with multiple land owners.

Transmission connectivity
Most of the older wind projects are connected to an 11kV line (particularly in Tamil Nadu). This poses a major hurdle for any repowering initiative as it would require investment into new transmission infrastructure. It also begs the question of who will fund the additional cost of a new transmission upgrade.

A new transmission upgrade for these projects could be brought under the ambit of India’s ‘green corridor’ initiative. Also, the upgrade could be a part of the overall repowering project and its cost could be reflected in the overall levelised tariff of the project.

Addressing these commercial and operational challenges requires a clear policy framework. The benefits of improved generation and in turn the improved revenue and return on investment, far outweigh the challenges.

A suitable business model will need to be developed in which the interests of all parties are taken care of. To manage the ownership of the repowering project, IEEFA suggests a Special Purpose Vehicle (SPV) model providing equity ownership and revenue sharing in the same proportion for all the owners.

The incremental generation due to repowering could be sold to a new off-taker through open access, while also retaining the older off-takers – Discoms or captive – to service the capacity and generation under the legacy PPA. Wind repowering is an opportunity to revive India’s 10GW (annually) wind turbine manufacturing industry as well as the allied industries.

Unlike India’s solar power industry, which depends on imported solar modules exposing it to currency fluctuations and inflating the country’s trade deficit, wind power in India has an existing domestic manufacturing capacity that could support accelerated capacity commissioning right away.

Kashish Shah is a Research Analyst at IEEFA

This article first appeared in the Economic Times.