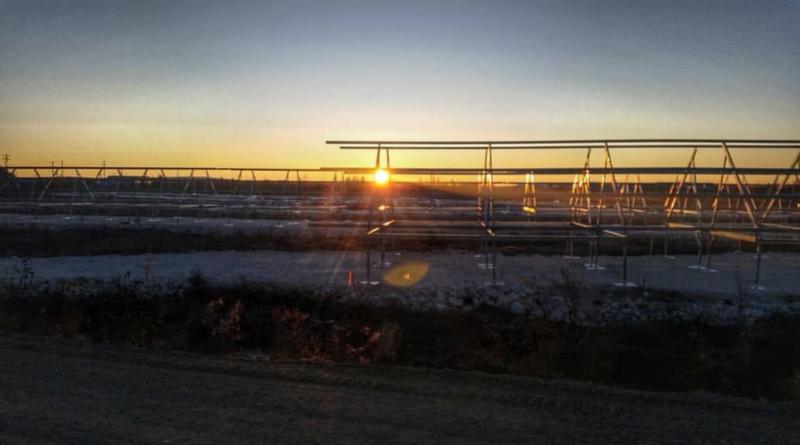 Publisher’s Note: The following showcases the challenges and environmental benefits of installing a microgrid in a location that defines ‘remote.’ We’re proud to share this story featuring BBA Engineering and 3eyond Consulting as they worked to maintain the longstanding harmony with nature held by the community and persevered to overcome obstacles presented by an extreme environment. We are honored that HOMER Pro was instrumental in the design process.

There are no roads that lead to Old Crow. The remote Canadian village, 80 miles north of the Arctic Circle, is the Yukon’s northernmost settlement. All supplies must be flown in, and until recently, the community’s energy was produced by three diesel-powered generators with fuel delivered by aircraft every 2 to 3 months.

The majority of Old Crow’s 300 inhabitants are members of the Vuntut Gwitchin First Nation, a community that, for millennia, has lived in harmony with nature. The village is positioned on the migration route of the Porcupine Caribou, the community’s primary source of sustenance and materials for textiles. Beyond Old Crow, the quiet tundra and its rolling hills stretch out in all directions, interrupted only by small coniferous trees. This is a sensitive environment and one that the Vuntut Gwitchin know they must protect.

And then Old Crow reached the tipping point. In 2017, the village experienced fuel shortages when an ice road that failed to freeze early enough in the season was unable to bear transport vehicles. Fuel had to be flown in from far away, driving up the cost.

Community members took action. They began working with 3eyond Consulting and BBA Engineering to develop a solution. They mapped out an approach to develop a renewable-based system that would provide reliable power three seasons a year.

Solar Power in the Far North

Initial feasibility studies indicated that despite long, dark winters, during spring and fall refracted light from the snow-covered ground would augment solar productivity. In summer, when the Arctic sun never sets, analysis revealed that Old Crow could in fact rely 100% on solar generation for several months, with a battery system to manage fluctuations in sunshine on cloudy days and spikes in demand.

“The HOMER analysis enabled us to optimize battery size with PV capacity, while a unique optimizer design allowed us to reduce inverter costs,” Nick Hawley, a partner at BBA Engineering.

In the northern hemisphere, the sun typically sets towards the south, but above the Arctic Circle, during summer months, the sun circles the sky 24-hours a day, never setting. In the spring and fall, it sets in the north. For this reason, BBA and 3eyond engineers designed a unique back-to-back, pitched panel design—positioned for east-west exposure rather than a traditional south-facing array—that would allow them to make the most of the Arctic sun’s low angle. In addition to maximizing energy production and space, the pitched panel design will shed snow and the back to back set-up reduces wind uplift forces, enabling the engineers to reduce the size of the foundation.

Installation in an Extreme Environment

The team worked through a myriad of design challenges such as extreme cold, the geological limitations of permafrost, and limited access to building supplies in such a remote location. The only local construction material was quarry rock. So, they determined it was most cost effective to utilize materials that were easily transportable by plane, which ruled out large quantities of steel, wood, and cement.

For anchoring the foundation and supporting structure in permafrost, engineers consulted local geologists and contractors to identify the best proven construction approaches for the arctic, as well as sources of equipment suitable for such extreme conditions. To accommodate the continual expansion and contraction of permafrost, they built height-adjustable feet for the racking system.

“All of the equipment that we could find was only rated for -40 Fahrenheit,” explained Hawley. “We needed it to be able to go down another 20 degrees, so we had to work with materials specialists and equipment providers to make sure that the equipment would be safe at lower temperatures.”

In 2018 crews from Whitehorse-based Solvest Inc. began to install the solar panel array. They had to work around the clock, however, because there was a shorter-than-usual period after the snow melted and before the active layer of soil turned to mud when they could access the pad and install the equipment. Because of the array’s unique pitched design, 960kW of panels were installed for a 480kW capacity and the inverters were sized accordingly. The PV system is integrated with the diesel generators supplying power to the community.

Today, the 480kW system represents the largest solar project in the Circumpolar Arctic. The project is forecast to reduce the amount of fuel used by the community’s generators by over 50,000 gallons of diesel per year and reduce greenhouse gas emissions by 680 tons of CO2e per year – the equivalent of taking 140 cars off the road. In the summer of 2021, as part of the final development stage, a Hercules aircraft will deliver a shipping container with 350 kWh of lithium-ion batteries for energy storage.

In 2018 the Vuntut Gwitchin government negotiated a landmark power purchase agreement with ATCO Electric, who owns the diesel-powered grid. The Vuntut Gwitchin government will own and operate the $8 million array (including batteries) over a 25-year contract period and ATCO Electric will buy the solar energy, feed it into the grid, and distribute it to the community. The agreement represents the first of its kind in the northern territories and is the first electricity purchase agreement that allows an independent power producer to meet 100% of the community’s demand with renewable energy.

Hawley explains that, in addition to solar, someday the system may incorporate wind generation as well. The Vuntut Gwitchin Government (with support from BBA and 3eyond) recently installed a Meteorological Evaluation Tower to analyze wind patterns and help determine feasibility of wind to augment solar during the wintertime.

The prioritization of renewable energy is just one way in which this project balances power generation with environmental sensitivity. When engineers determined the ideal location for the Old Crow Solar Project, it happened to be in the center of a berry patch, a sacred space where community members traditionally harvest fruit. Project engineers designed the solar system so that the native berry plants could grow between the panel rows, with no fencing around the array to allow both people and wildlife to wander through. It seems the thoughtful project design has paid off. This summer, Hawley reports that community members have observed cranes feeding on the berries.

“The Old Crow Solar Project demonstrates Indigenous leadership in addressing climate change in the North,” said Chief Dana Tizya-Tramm of the Vuntut Gwitchin Government. “Innovative clean energy solutions to diesel reliance ensure a better future for our children, contribute to the economic stability of our community, and bring us closer to our climate objectives.”

Africa's 'first fully solar-powered village' wants to be a model for a renewable future.