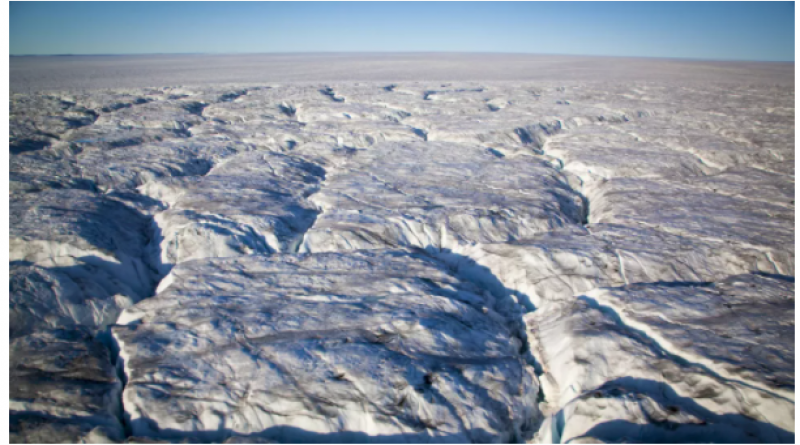 Scientists have discovered an ancient lakebed buried under more than a mile of ice that may hold secrets to Greenland's past climate.

The lake formed when northwest Greenland was ice-free, sometime between hundreds of thousands or even millions of years ago. Given Greenland's rapid melt today, the lake could reveal something about the Arctic's future as the ice caps shrink.

"This could be an important repository of information, in a landscape that right now is totally concealed and inaccessible," Guy Paxman, a postdoctoral researcher at Columbia University's Lamont-Doherty Earth Observatory, said in a statement. "We're working to try and understand how the Greenland ice sheet has behaved in the past. It's important if we want to understand how it will behave in future decades."

Paxman and his colleagues discovered the lake using data from instruments that use radar to penetrate beneath the ice surface to measure topography; much of the data came from NASA's Operation IceBridge.

The lake basin sits 1.1 miles (1.8 kilometers) below the surface of the ice and stretches over 2,700 square miles (7,100 square km), the size of Rhode Island and Delaware combined. At its deepest point, the lake would have extended about 800 feet (250 meters) down.

The researchers also mapped 18 streambeds that would have flowed into the lake from the north, as well as an outlet that would have drained the lake to the south. Today, this ancient water system is nothing but sediment, and scientists don't know when it last held water. According to previous research, Greenland's ice has advanced and retreated at various points over the last million years. There may have also been ice-free stretches going back over the past 30 million years, according to the Lamont-Doherty Earth Observatory.

The depth of the sediments in the lake suggests it is between hundreds of thousands and millions of years old, Paxman said. To get more specific than that, scientists would have to drill beneath the ice into the lake sediments to study them directly.

The lake may have been formed when an ancient fault pulled the Earth apart, creating a depression, the researchers said, or it may have been a bowl carved out by a retreating glacier.

Drilling into the lakebed might also provide clues to the future. The lakebed may contain traces of certain chemicals or fossils that could reveal more about Greenland's past climate. Scientists could then compare these past conditions with the changing conditions in the Arctic today.

There are no current plans to drill into the lakebed, but such a feat would be possible. In 2003, researchers drilled 1.9 miles (3,085 m) beneath the ice surface in Greenland. A project set to launch in 2021 called GreenDrill will aim to drill into the bedrock at several sites in northern Greenland to determine when and for how long portions of the region were ice-free in the past.

Paxman and his colleagues reported their findings online Oct. 28 online in the journal Earth and Planetary Science Letters.

Greenland ice sheet lost a record 1m tonnes of ice per minute in 2019.