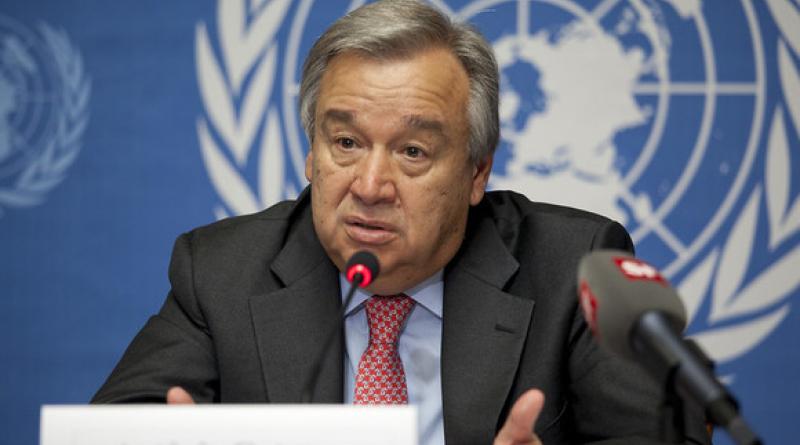 "Climate disruption is approaching a point of no return," Guterres will warn in a hard-hitting address timed to coincide with Earth Day. "We must act decisively to protect our planet from both the coronavirus and the existential threat of climate disruption."

Recovery packages should deliver new jobs and businesses that can drive a clean energy transition, Guterres will argue, adding that business bailouts must be contingent on their ability to create green jobs and drive sustainable growth. Fiscal firepower must drive a "shift from the grey to green economy", he added, in a bid to build more resilient infrastructure and economic models.

In a blow to the fossil fuel industry, the Secretary-General will say public funds should be used to "invest in the future, not the past" and funnelled into sustainable sectors that help tackle environmental and climate challenges. Fossil fuel subsidies must end and polluters must pay for their emissions, he will add, reiterating previous calls for support for fossil fuel industries to be drastically scaled back.

In addition, Guterres is to argue that the financial system must be reworked urgently to incorporate climate risks and opportunities, and that climate considerations should feature in "all aspects of public policy-making and infrastructure".

Finally, Guterres is to urge all leaders to work together as an international community, noting that "greenhouse gases, just like viruses, do not respect national boundaries".

"The current crisis is an unprecedented wake-up call," he explained. "We need to turn the recovery into a real opportunity to do things right for the future."

Guterres' intervention echoes calls from a growing band of business and political leaders around the world for climate action to play an integral role in the planned wave of economic stimulus packages.

But the recommendations also come just hours after US President Donald Trump vowed to bail out the country's flailing oil industry, after oil prices tumbled around the world, briefly going negative for future US oil contracts. The pledge to protect the oil industry came just weeks after the Trump administration successfully gutted an Obama-era clean car standard, arguably its most significant action to undermine climate action to date.

Across the Atlantic, the UK government has been faced with growing calls from green groups, opposition politicians, and think tanks, to prioritise green stimulus packages - pleas it appeared to have sidelined when it provided £600m loan to budget airline Easyjet in early April. However, Number 10 is also reportedly keen to ensure the pursuit of the UK's net zero emissions goal plays a central role in the planned new stimulus package.

Guterres' speech comes on the same day as the World Meteorological Organisation prepares to release its final report on the Global Climate 2015-2019 , which is set to confirm that a raft of extreme weather records have been toppled in recent years.

"Whilst Covid-19 has caused a severe international health and economic crisis, failure to tackle climate change may threaten human well-being, ecosystems, and economies for centuries," said WMO Secretary-General Petteri Taalas. "We need to show the same determination and unity against climate change as against Covid-19, and act together in the interests of the health and welfare of humanity not just for the coming weeks and months, but for many generations ahead."

Tom Sanzillo, director of finance at financial think tank IEEFA, said the economic case for green stimulus plans was hugely compelling. "The business model for the oil and gas industry is financially broken," he said. "The entire industry has been a last-in-class performer for most of the past decade. The demand freeze brought on by the coronavirus brings into sharp relief the need for a new business model, and heightened the importance of realigning government and industry interests. Today renewable energy, electric vehicles, plastics recycling, home heating demand-side initiatives, new efficiency models and laws restricting fossil fuel use compete with industry growth scenarios. Even as energy demand grows, the markets that serve that demand are expanding beyond the fossil fuel industry."

In related news, four more European countries this week joined a call to place climate action and pursuit of the EU's net zero emissions target at the heart of the bloc's recovery plans.

Ireland, Slovakia, Slovenia and Malta added their signatures to a joint letter from environment and climate ministers from 13 EU countries that was published last week on the Climate Home News website.

The letter backs European Commission plans for a massive Green Deal investment programme in support of the bloc's net zero emissions by 2050 goal. "The focus is presently on fighting the pandemic and its immediate consequences," it states. "We should, however, begin to prepare ourselves to rebuild our economy and to introduce the necessary recovery plans to bring renewed, sustainable progress and prosperity back to Europe and its citizens. While doing so, we must not lose sight of the persisting climate and ecological crisis. Building momentum to fight this battle has to stay high on the political agenda."

The latest signatories mean over half of EU member states have now backed the calls for Brussels to use the "roadmap" provided by the Green Deal "to make the right choices in responding to the economic crisis while transforming Europe into a sustainable and climate neutral economy".

"We should withstand the temptations of short-term solutions in response to the present crisis that risk locking the EU in a fossil fuel economy for decades to come," the letter adds.