Once-in-a-century wildfires in the UK could happen ‘most years’ by 2100 due to climate crisis. 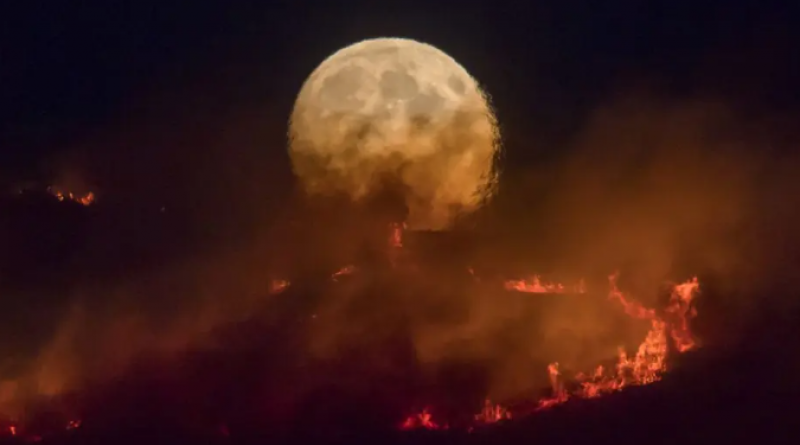 In future decades large wildfires could pose similar level of threat to Britain as they currently do in the south of France or parts of Australia, say researchers.

Wildfires which ordinarily only occur in Britain once in a century could instead happen most years within just the next 80 as the climate crisis worsens, a study suggests.

The extremely hot and dry conditions which make wildfires a risk are set to significantly increase across southern and eastern England over the coming decades, the University of Reading says.

In these areas, the very highest danger level could be reached four days a year on average by 2080, compared with once every 50 to 100 years currently.

Wildfires need a source of ignition which is difficult to predict, so wildfire risk is typically measured by the likelihood that a spark would develop one.

As temperatures rise and summer rainfall decreases due to the impacts of the climate crisis, conditions highly conducive to a wildfire could be nearly five times more common in some regions of the UK by the latter part of the century, the researchers said.

In the driest regions, this could put habitats at risk for up to four months per year on average.

Professor Nigel Arnell, a climate scientist who led the research, said: “Extremely hot and dry conditions that are perfect for large wildfires are currently rare in the UK but climate change will make them more and more common.

“In future decades, wildfires could pose as much of a threat to the UK as they currently do in the south of France or parts of Australia.

“This increased fire danger will threaten wildlife and the environment, as well as lives and property, yet it is currently underestimated as a threat in many parts of the UK. This research highlights the growing importance of taking the threat of wildfires seriously.”

His team looked at how often different regions would experience conditions that made it highly likely that any wildfire would become established.

They calculated future fire danger based on the latest UK climate projections, known as UKCP18, which provide the most up-to-date assessment of how climate may change.

The researchers examined climate scenarios with both low and high emissions of greenhouse gases, using a version of the Met Office’s Fire Severity Index which is used to define levels of wildfire danger.

Under the high emissions scenario, they found the average number of “very high” danger days each year will increase significantly in all parts of the UK by 2080.

Excluding London, southern and eastern England were predicted to be worst affected as the average number of danger days more than quadrupled to 111 days in the southeast and 121 days in the east on average.

Significant increases by 2080 were also seen in the west Midlands (from 13 days to 96). Even traditionally wet parts would dry out for longer, leaving them vulnerable to severe fires for several weeks on average each year, including Wales (five days to 53), Northern Ireland (two to 20) and west Scotland (three to 16).

“Exceptional danger” days – extremely rare currently – were also found to become more commonplace across by 2080, with many areas seeing large increases in numbers of days when these conditions were present, unless emissions are drastically curbed.

The research showed that the projected increase in fire danger is predominantly due to the expected hotter temperatures, less rainfall, lower humidity and stronger winds.

As well as the direct impact of wildfires on ecosystems, habitats and biodiversity, they also contribute to the climate crisis, worsen air quality and pose health and economic risks.

Although the UK records tens of thousands of fires each year, these are almost all very small, especially in comparison to those in countries and regions like Australia and California, which have the kinds of hotter, drier climates forecast for the UK in future decades.

Although the UK has experienced very low losses from wildfires so far, up to £15m is estimated to be spent each year tackling them.

Furthermore, the scientists warned that there is no coordinated strategy for wildfires in England, only a voluntary forum that does not have powers to set standards or guidance.

Many serious wildfires have occurred in the UK in recent years, including the Swinley Forest fire on the Surrey/Berkshire border in May 2011 which threatened critical infrastructure, the Saddleworth Moor fire in the Peak District in May 2018 and on Wanstead Flats, east London, in July 2018 – the last two of which led to residents being evacuated.

In Marlow, Buckinghamshire, in July 2018 major fires destroyed houses and businesses and an extensive fire in Moray, Scotland, in April 2019 endangered a wind farm.

The researchers said that while natural weather and climate conditions directly affect the danger of a wildfire becoming established, the “risk” of a wildfire occurring often depends on deliberate or accidental human acts.

The authors warned that, therefore, the study does not indicate how likely wildfires are but their likely severity if they occurred.

Wildfires are striking closer and closer to cities. We know how this will end.