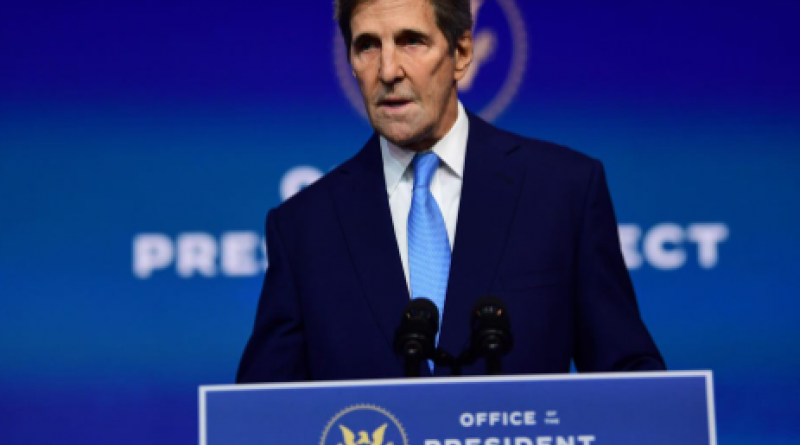 Speaking in London, the US climate envoy said world did not have ‘the luxury of waiting until Covid is vanquished to take up the climate challenge’

There is “no need” for any new fossil fuel investments if the world is to meet its climate goals, John Kerry has said.

In a speech made 100 days before Cop26, a pivotal global heating summit to be held in Glasgow, the US climate envoy urged all major economies to set out tougher action plans for tackling emissions to “protect and preserve the fragile world we share”.

“It’s about understanding that it costs more to not respond to the climate crisis than it does to respond,” he told a crowd including London mayor Sadiq Khan and shadow business secretary Ed Miliband on Tuesday. “It is – without exaggeration – about survival.”

Speaking from Kew Gardens in London, Mr Kerry added that the world did not have “the luxury of waiting until Covid is vanquished to take up the climate challenge” and that efforts must be made to meet the Paris Agreement’s aspirational target of limiting global warming to 1.5C above pre-industrial levels.

He also backed a major report from the world’s energy watchdog which says that investment in coal, oil and gas must stop immediately if the global energy sector is to reach net-zero emissions by 2050.

“The International Energy Agency tells us we don’t actually need any new investment in oil, coal or gas production,” he said.

“[It is] simply not necessary to meet our energy needs given other technologies that are online and are coming online.”

His words come as the UK government is facing criticism over plans for a major new oil and gas project in the North Sea. If approved, the Cambo project would produce oil and gas until 2050 – the date at which the UK has set a legal target to reach net-zero emissions. 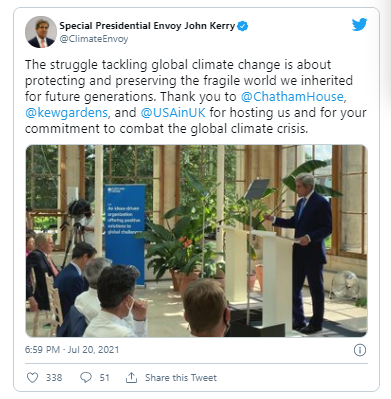 When asked about the project, Mr Kerry said that the UK government should “measure the need for [the oil field] very, very carefully”

“I’m mindful of what the IEA says, we do not need [new oil and gas],” he told reporters.

Speaking to The Independent, Mr Miliband said Mr Kerry “was right” to urge the government to face up to the need to step away from fossil fuels.

“We are going to have to act on fossil fuels, we can’t just carry on as we are,” he said.

“The floods in Germany and the heatwaves in Canada show that climate change is not some theoretical problem, it’s real and it’s here.”

The Independent’s Stop Fuelling the Climate Crisis campaign is shining a light on UK support for fossil fuels ahead of Glasgow’s major climate summit, which is known as Cop26.

In his wide-ranging address, Mr Kerry also warned that solving the climate crisis would be “impossible” without faster action from China, the world’s largest greenhouse gas emitter.

“If China sticks with its current plan ... it knocks at least a decade off the timeline for the rest of the world to decarbonise. And that, my friends, sets a goal that is impossible to achieve,” he said.

He added that it was “critical” that China and the US, the world’s second largest emitter, headed in “the same direction” in tackling the climate crisis.

“Obviously, it is not a mystery that China and the US have many differences,” he said. “But on climate, cooperation is the only way to break free from the world’s current mutual suicide pact.”

In response to Mr Kerry’s remarks, a government spokesperson said: “While we are working hard to drive down demand for fossil fuels, there will continue to be ongoing demand for oil and gas over the coming years, as recognised by the independent Climate Change Committee.”

Half of emissions cuts will come from future tech, says John Kerry.

John Kerry commits US to climate crisis fight but warns world is way off pace.