Nearly $2tn of damage inflicted on other countries by US emissions 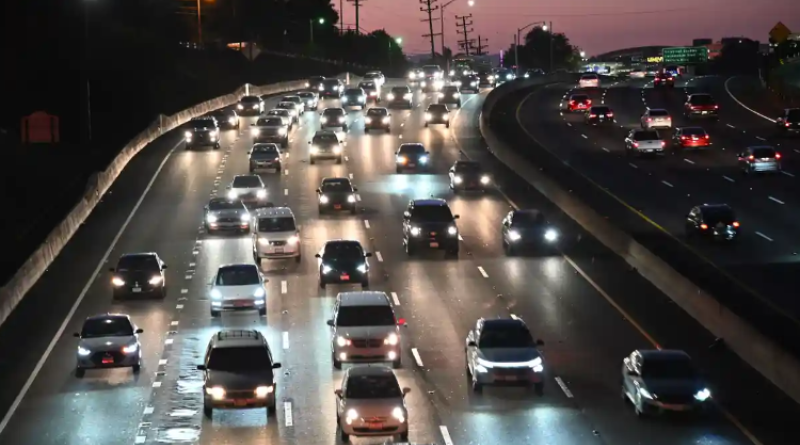 The US has inflicted more than $1.9tn in damage to other countries from the effects of its greenhouse gas emissions, according to a new analysis that has provided the first measurement of nations’ liability in stoking the climate crisis.

The huge volume of planet-heating gases pumped out by the US, the largest historical emitter, has caused such harm to other, mostly poor, countries through heatwaves, crop failures and other consequences that the US is responsible for $1.91tn in lost global income since 1990, the study found.

This puts the US ahead of China, currently the world’s leading emitter, Russian, India and Brazil as the next largest contributors to global economic damage through their emissions. Combined, these five leading culprits have caused a total of $6tn in losses worldwide, or about 11% of annual global GDP, since 1990 by fueling climate breakdown.

“It’s a huge number,” said Chris Callahan, a researcher at Dartmouth College and lead author of the study, of the overall economic loss. “It’s not surprising that the US and China are at the top of that list but the numbers really are very stark. For the first time, we can show that a country’s emissions can be traced to specific harm.”

The Dartmouth researchers combined a number of different models, showing factors such as emissions, local climate conditions and economic changes, to ascertain the precise impact of an individual country’s contribution to the climate crisis. They looked for these links over a period spanning 1990 to 2014, with the research published in the journal Climatic Change.

What they found was a perniciously uneven picture – rich nations in northerly latitudes, such as those in north America and Europe, have done the most to fuel climate change but have not yet been severely harmed by it economically. Countries such as Canada and Russia have even benefitted from longer agricultural growing seasons and reduced deaths from the cold as winters have warmed. 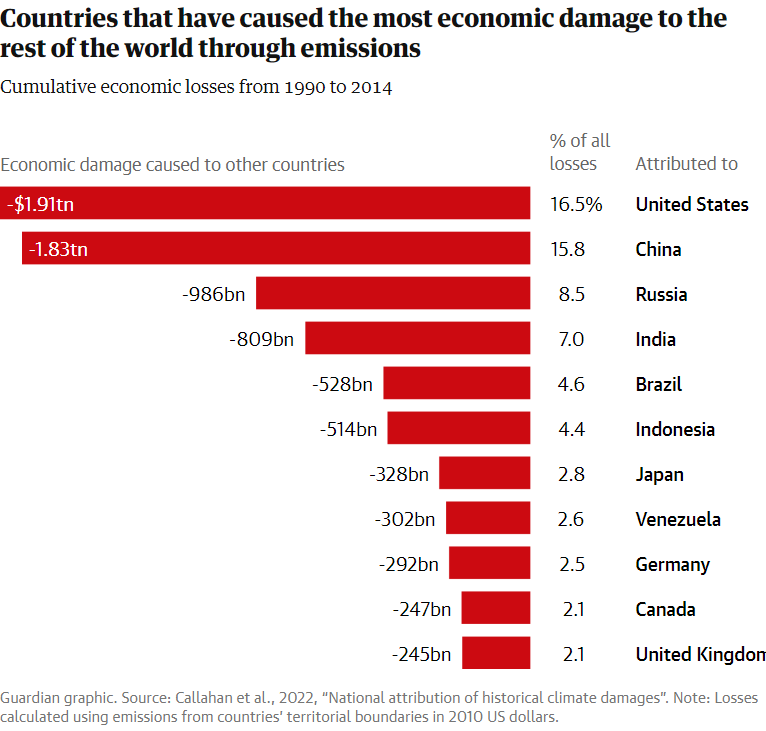 Conversely, poorer countries, such as those found in the tropics or low-lying Pacific islands, have done the least to harm other nations and yet are suffering the brunt of the economic damage from climate change. The research didn’t factor things not included in GDP, such as biodiversity loss, cultural harm and deaths from disasters, meaning the damage is in reality far greater.

“In places that are already hot you are seeing it becoming harder to work outside, mortality from the heat is on the rise, it’s harder to grow crops,” said Justin Mankin, a geographer at Dartmouth and co-author of the paper. “If you layer that on top of which countries have emitted the most you get an almost perfect storm.

Developing countries and climate activists have pushed for “loss and damage” payments to be made to those who are suffering the most from global heating through heatwaves, floods and drought. But the US, which is responsible for around a quarter of all emissions to date, has resisted setting up such a fund, citing fears that it would be held legally liable for the damages caused by its voracious appetite for fossil fuels such as oil, coal and gas.

The pressure to alter this stance is ramping up again ahead of UN climate talks to be held in Egypt later this year, with an alliance of young activists from more than 40 countries recently writing to the talks’ president to urge action on the loss and damage issue.

The climate crisis has “escalated humanitarian crises disproportionately affecting the poor countries in the global south”, the letter states, noting that the UN estimates that as many as 3.6 billion people around the world now live in areas that are highly vulnerable to climate disasters.

“For far too long, efforts to reduce emissions and scale up adaptation have been utterly inadequate exceeding people’s ability to adapt. Therefore, loss and damage is now part of the reality of climate change and must be addressed.”

Progress, however, has been fraught. Wealthy countries have dawdled on a promise to provide $100bn in climate aid to vulnerable countries and any legal avenue to extract damages from the US or China is complicated by the fact neither country recognizes the jurisdiction of the international court of justice in the Hague.

“The chief impediment to claims by one country against another for climate damages isn’t their scientific basis, it’s their legal basis,” said Michael Gerrard, director of the Sabin Center for Climate Change Law at Columbia Law School. “Countries enjoy sovereign immunity against most kinds of lawsuits unless they have waived it.”

This impasse means some sort of negotiated deal remains the most likely way that the inequity of climate impacts is ameliorated. “It’s a positive step that this study is beginning to quantify the harms of these national actors; we can see the scale of harm is enormous,” said Carroll Muffett, chief executive of the Center for International Environmental Law.

“We are moving slowly towards some sort of accountability for this. As the evidence mounts and the record of US obstructionism in the climate context is established, I don’t think it and other countries will be able to escape their liability in perpetuity,” Muffett added.

“The costs of climate damages are mounting and ultimately someone will have to pay that cost. The question is who will that be and how it will be done.”