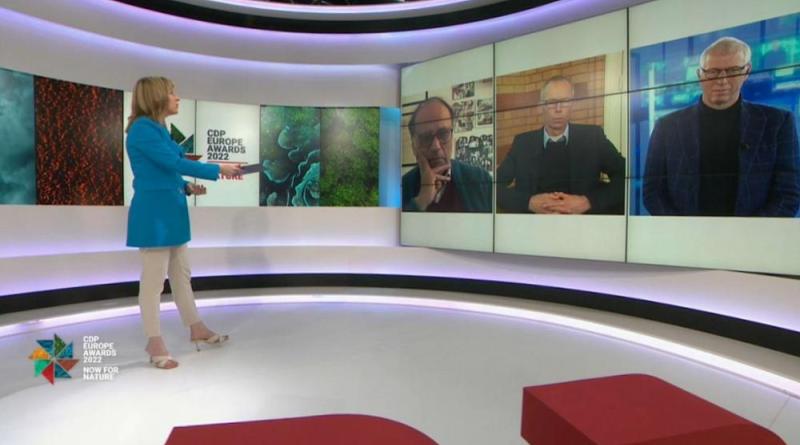 Nature and its preservation must be placed at the centre of policies to tackle climate change, experts stressed at the annual CDP Europe Awards 2022.

The CDP event celebrates the companies and cities which are working to achieve greater sustainability, and the highlights are being broadcast on Euronews, in a special programme hosted by Méabh McMahon.

NGOs worldwide have called for the Earth to become 'nature positive' by 2030, a goal leaders of the G7 group of industrialised countries have endorsed. Nature positivity entails halting and reversing today’s catastrophic loss of nature and biodiversity.

2030 is a crucial deadline, Elizabeth Mrema, Executive Secretary at the Convention on Biological Diversity told Euronews, because “what is at stake is the loss of biodiversity reaching unprecedented rates in the history of mankind.”

“We need to see a better integration of nature and climate change in decision-making on an equal footing at the national level,” she argued, adding: “No time to waste. Scientists have told us we either take action now or perish.”

Nature plays a vital part in regulating the Earth’s climate as “biosphere systems help us in absorbing and dampening the disturbance caused by our fossil fuel burning,” Johan Rockstrom, Director of the Potsdam Institute for Climate Impact Research, underlined in his panel discussion with Euronews.

These biosphere systems include the forests, the oceans, the ice sheet, the permafrost as well as grasslands and wetlands. Many of them act as carbon sinks, meaning they absorb more carbon from the atmosphere than they release and thus help in cooling the planet. However, some carbon sinks such as wetlands can become carbon sources if they are not managed and protected.

The threat of such tipping points being reached is real, according to the CDP Europe Awards panelists. "The demand we are making on biospheres’ goods and services vastly exceeds the biopheres capacity to supply them on a sustainable basis,” according to Professor Partha Dasgupta, the Franck Ramsey Professor Emeritus of Economics at the University of Cambridge.

“Some crude calculations suggest the ratio is about one point six, which is where we get the metaphor that we need 1.6 Earths to satisfy our needs. Now that’s not going to happen. There are no 1.6 (Earths). So we either decrease demand or help rejuvenate the biosphere by creating, allowing it to supply more,” Dasgupta added.

Cities are a big contributor to global warming, according to the UN, accounting for about 75% of CO2 emissions worldwide, with transport and buildings being among the largest contributors.

Many have already taken action, including the Norwegian capital, Oslo, which is part of the C40 network of 100 cities worldwide that have pledged to halve their emissions within a decade.

In Olso this is being addressed through measures to reduce greenhouse gas emission by 95% by 2030, compared with 2009, to manage natural areas to sequester carbon in vegetation and soil, and to reduce the total energy consumption by 10% compared to 2009.

Raymond Johansen, Mayor of Oslo, underlined to Euronews that “the green shift needs to be fair” and “cannot just be a middle class project.”

“And that’s a challenge but we will not win if we’re not able to get all the people on board,” he said.

His counterpart from Florence, Italy, Dario Nardella, has also positioned his city on the forefront of climate change mitigation.

“Florence has decided long ago to be a zero volume city, improving the quality of our estate and spaces without losing additional natural space.”

“We are planting a lot of trees in the urban area and creating urban gardens with green trees and fresh fruits for the benefit of our citizens because we have to protect our environment,” he explained.

The Italian city now plans to plant one million trees within its confines over the next decade.

Francesco Starace, CEO of the Italian energy company ENEL, told Euronews that the company is a member of the Convention on Biological Diversity and that along with the other members they set targets on biodiversity and nature preservation. Nowadays, the company has more than 180 projects worldwide that deal with mitigating the damage to biodiversity and restoring it.

The issue is “key”, Firmenich CEO Gilbert Ghostine told Euronews, as the company “sources 450 botanicals from all over the world” and this means engaging with farmers across the world such as vanilla producers in Madagascar or vetiver growers in Haiti.

The company thus committed to net zero in 2015 and reached peak emission in 2019. “Since then we are decreasing year on year,” he said, with a near 4% year-on-year drop last year.

Both Danone and Firmenich have been granted a AAA rating by CDP whose ranking evaluates the companies’ pledges and results towards climate change, forests and water security.

They are among just six European companies -- out of a total of 14 worldwide -- to have received this top rating alongside Austrian fiber manufacturing giant Lenzing and the Metsä Board Corporation, a paperboard mills company from Finland.

Robert van de Kerkhof, a member of Lenzig board, explained to Euronews that some CEOs might be put off from setting nature and climate change targets because “you need to show your weaknesses”, admit where you are starting from, and then be completely transparent on the results and investments.

But for Metsä CEO Mika Joukio, setting ambitious sustainability targets now is particularly important because he expects “these topics will be very high on the agenda for brand owners, retailers and consumers”.

The EU ‘confident’ about its Green Deal

The European Union was among the first to set a carbon neutrality target for 2050 and has adopted a Green Deal package to achieve the target. The legislation includes funds to help European regions particularly reliant on fossil fuels transition to more virtuous economic models, as well as funds to make buildings more energy-sufficient, boost clean transport, and cut waste whether electronic or food.

In an interview pre-recorded in January 2022, Frans Timmermans, the European Commission’s Vice-President in change of the Green Deal, stressed to Euronews that he is “pretty confident” the landmark legislation will deliver on its promises.

“There’s a lot of leadership, not just in politics, but also the private sector and amongst citizens,” he said, conceding however that not everyone has yet been converted to the cause with “many people who think that just staying put is the best option because they think that doesn’t cost anything.”

As policy-makers prepare for the April COP15 Biodiversity Conference in Kunming, China, he called for “very clear conclusions on how we protect our nature, how we let nature recover.”

“If you let parts of the oceans recover; it recovers so fast fish stocks come back. Natural resources are restored. Just leave it alone, you don’t need to do anything else,” Timmermans said.

‘Nothing left to burn’: wildfires and floods could turn the tide on Turkey’s climate policy