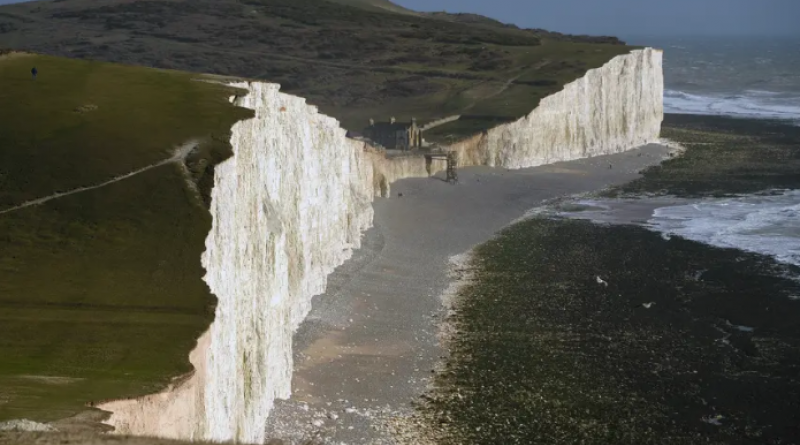 Stark warning from charity highlights risks to properties, monuments and landscapes in Britain as planet heats up.

The National Trust has developed what it has described as a “game changing” map that illustrates threats the climate crisis poses to some of its most iconic and culturally significant sites – and how they might be tackled.

Using existing data from across England, Wales and Northern Ireland, and plotting it across the various properties, monuments and coastlines the charity manages will allow it to understand the likely local impact of factors including extreme heat and humidity, flooding, landslides, coastal erosion and high winds.

The map works to a worst-case scenario of no intervention on emissions, and is intended to act as a “flagging tool”, to highlight potential hazards at the trust’s sites.

This will then help the organisation pinpoint locations where interventions are required.

They said this could include tree planting to slow water run-off, peat bog restoration to hold back water, river restoration or identifying areas which need more shade due to extreme heat.

The organisation warned that in this scenario, as heat and humidity rise dramatically, the southeast of England would be particularly susceptible to drastic increases. One-third of National Trust sites in the region will experience at least 15 days of 30C a year.

Meanwhile, the storm damage, landslides and flooding the organisation has seen in recent years would become common and more widespread, particularly in Wales and the north of England, the trust said.

Harry Bowell, its director for land and nature, said: “This map is a game-changer in how we face the threat climate change poses to the places we care for.

“While the data draws on a worst-case scenario, the map paints a stark picture of what we have to prepare for. But by acting now, and working with nature, we can adapt to many of these risks.”

He added: “Planting trees, restoring peatlands, slowing the flow of water in flood-prone river valleys and preparing our places and collections – as well as staff and volunteers – for the increased heat and humidity are some of the measures this map can inform.”

Mr Bowell also called on the government to beef up its delayed environment bill before the UK hosts the UN’s international climate summit in Glasgow in November.

He said: “[The] government can play its part by strengthening its environment bill investing in green infrastructure, growing the sectors, jobs and industries that will enable us to tackle and adapt to the impacts of climate change before world leaders come together at Cop26.”

The trust also outlined existing climate-related issues it is dealing with at some of its historic sites, including the erosion and “regular landslides” on the coastline around the world-famous Giants Causeway in Northern Ireland, which it said was a result of increased rainfall, and how an “otherwise sound” 18th century barn collapsed at Malham Tarn, Yorkshire Dales, as a result of soil shrinkage.

Other examples include flooding around Lyme Park in Cheshire following long dry spells, resulting in flooded gardens and water pouring into the property causing “significant damage”, and also greater levels of storm damage affecting Wales, resulting in properties requiring adaptations to deal with the changing weather.

UK government advisers the Climate Change Committee said the map was a “pioneering” piece of work, which could help mitigate the impacts of the changing climate across the country.

A spokesperson said: “This map will support our research and analysis into the vulnerability and exposure of some of the nation’s most important and sensitive heritage sites to future climate change.

“The pioneering approach could be used to inform our thematic reports and has the potential to shape the future of how we need to adapt to avoid some of the worst impacts of climate change at a local granular level.”

“We welcome this work by 3Keel and the National Trust and are excited to be working with them and our colleagues around the UK to develop this approach further, so that we can understand the hazards faced by all our heritage.

“Understanding these is the first step towards adapting to these challenges, which will allow us to continue to conserve our heritage for future generations.”

Dr Kate Roberts of Cadw, the Welsh Government’s historic environment service, said: “The impact of climate change, and in particular the extreme weather events that we are experiencing with increasing frequency, are one of the most significant threats facing our historic environment.

“Our actions today determine the historic environment that future generations will experience. Knowing how and where to focus our resources is challenging which is why research such as this is so critical.”

A Defra spokesperson said: “We are fully committed to the Environment Bill as a key part of delivering the Government’s manifesto commitment to create the most ambitious environmental programme of any country on Earth.

“The Bill will be transformative, setting legally binding targets, restoring nature and biodiversity, tackling air pollution, cutting plastic use and revolutionising how we recycle. Work on the Bill’s measures is continuing at pace.”

These African World Heritage Sites are under threat from climate change.