More than 600 arrests made at Extinction Rebellion protests in London. 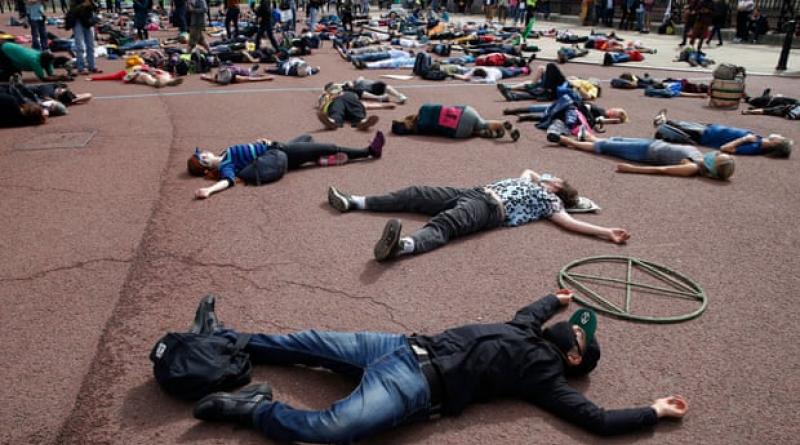 More than 600 people have been arrested during five days of climate crisis protests in central London, police have said.

Environmental campaign group Extinction Rebellion (XR) reignited its efforts to highlight the dangers of climate crisis this month after they were largely placed on hold by the coronavirus pandemic.

In a series of daily actions, protesters have marched on Parliament Square, blocked roads, staged sit-ins and glued themselves to the ground.

The protests led the Metropolitan police to impose conditions on where demonstrations could take place, while protesters were warned they risked a large fine if they failed to comply with coronavirus rules banning gatherings of more than 30 people.

Scotland Yard also said on Saturday that 20 people had been reported for consideration of a £10,000 fixed penalty notice (FPN) for holding regulation-breaching gatherings representing a range of different causes.

One penalty report related to an anti-government demonstration that took place in Trafalgar Square on 30 August, the Met said.

Kyle Gordon, gold commander for the weekend’s policing operation, saidprotests had caused “serious disruption to local communities” in the past week.

He added: “Throughout this period we have become increasingly concerned the organisers of these events have not always taken all reasonable measures to limit the risk of transmission of coronavirus, thereby posing a risk, not only to those involved, but the wider public and communities of London.

“We remain in the middle of a pandemic and we all need to play our part in keeping each other and our communities safe.”

He said officers sought to enforce coronavirus legislation “as a last resort” and had proactively told event organisers of their “public health risk”.

Gordon added: “I would appeal to anyone planning on organising a gathering to consider your responsibilities under the regulations, and to do all you can to help keep our communities safe.”

On Saturday afternoon, an XR Citizens Assemble! gathering was dispersed by police in Trafalgar Square. During the peaceful protest outside the National Gallery, activists sat on the ground and listened to speeches while surrounded by a large police presence.

Officers asked the group to move on, with most dispersing by around 2.30pm. Some that refused to leave the area were carried or led away by police, including one man in handcuffs.

Darcy Mitchell, 45, from Bristol, told the PA news agency: “I’m here because scientists tell us that my children are going to see between three and five degrees of global warming in their lifetime.”

He warned this could lead to mass starvation, while young people were seeing the world “burning their future”.

A 68-year-old protester, who gave her name only as Wendy, said she was concerned that “the planet is dying and we’re helping it to die”.

She said police had been courteous, but she was prepared to be arrested.

A 32-year-old protester, who asked to be identified as just Jason, claimed the government was completely ignoring climate crisis.

Jason said 99% of protesters were wearing masks and trying to physically distance.

A five-a-side football match was also staged underneath nearby Nelson’s Column to highlight criticism of Barclays.

Protesters claimed the bank, a partner and former title sponsor of the Premier League, is the “largest funder of fossil fuels in Europe”.

The boat, bearing the words “Sound the alarm – Climate Emergency”, had been marched on foot from Brighton.

Extinction Rebellion to block streets in London, Manchester and Cardiff.