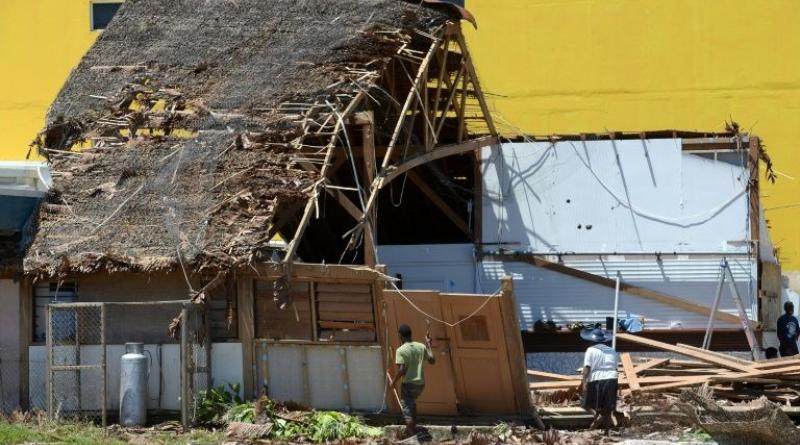 Cyclone Harold is strengthening and threatening Vanuatu, which is still recovering from the devastation unleashed by Cyclone Pam in 2015

Cyclone Harold is strengthening and threatening Vanuatu, which is still recovering from the devastation unleashed by Cyclone Pam in 2015 (AFP Photo/JEREMY PIPER)

The cyclone is now packing winds of up to 235 kilometres per hour (145 mph), prompting red alerts across several provinces.

It made landfall on the remote east coast of Espiritu Santo island on Monday morning and was heading directly for Vanuatu's second-largest town Luganville, which has a population of 16,500.

The slow-moving storm is expected to pass north of the capital Port Vila early Tuesday.

Officials warned residents in the nation of 300,000 to expect flash flooding and said ships should stay in port or risk facing huge swells.

Another concern is the impact a large natural disaster could have on Vanuatu's attempts to remain one of the world's few countries without any reported COVID-19 infections.

Vanuatu has virtually sealed its international borders to avoid the virus but emergency measures such bans on public meetings have been temporarily suspended to allow people to gather in evacuation centres.

"The focus was more on COVID-19 and now we have moved our focus to preparedness for the cyclone," Vanuatu Red Cross disaster coordinator Augustine Garae told the Australian Broadcasting Corporation.

"We understand that some people in some communities are not really well prepared."

If a similar operation were needed in the wake of Cyclone Harold it would run the risk of importing the virus to a nation that lacks the health infrastructure to deal with even a mild outbreak.

"There have been no confirmed cases of COVID-19 in Vanuatu, but a significant disaster at this time could present serious logistical challenges to delivering life-saving aid," Oxfam's Vanuatu director Elizabeth Faerua said.

The latest storm Harold has already caused widespread damage in the Solomon Islands, where an inter-island ferry ignored weather warnings and 27 people were washed off its decks.

Solomons police said Sunday that the bodies of five passengers from the MV Taimareho had been recovered and the search would resume the next day.

"I would like to thank everyone... involved in the search for the missing 27 people so far as we try as much as possible to find the bodies so their grieving relatives can give them a proper burial," chief superintendent Richard Menapi said.

The ferry set off from Honiara for Malaita island on Thursday night, packed with more than 700 people as part of a government evacuation programme in response to the virus crisis.

*Title photo: Cyclone Harold is strengthening and threatening Vanuatu, which is still recovering from the devastation unleashed by Cyclone Pam in 2015

Why the Indian Ocean is spawning strong and deadly tropical cyclones.