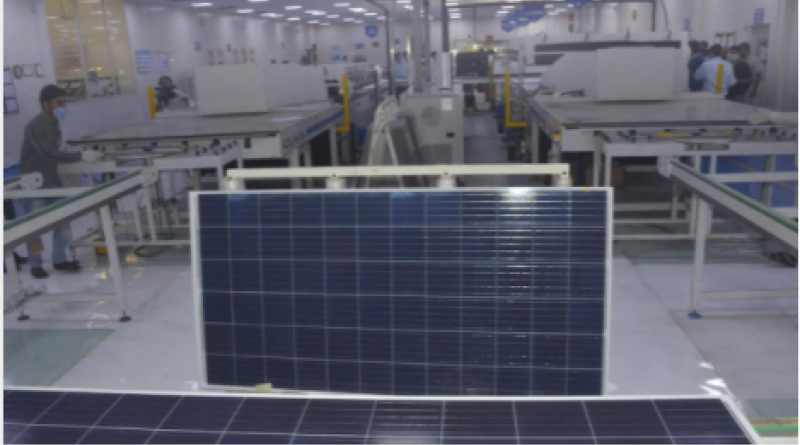 One of the chief arguments against transitioning away from fossil fuels and towards a zero-carbon economy is that it would cost the world energy jobs. But is such a fear really justified?

To find out, an international team of researchers set out to determine how meeting the Paris agreement goals would impact the global balance of energy-sector employment.

The result, published in One Earth on July 23, was "surprising," as study co-author and RFF-CMCC European Institute on Economics and the Environment environmental economist Johannes Emmerling told EcoWatch. Limiting global warming to well below two degrees Celsius would actually create eight million more energy jobs by 2050.

"We did not expect that at all," Emmerling said.

Previous attempts to predict the impact of climate action on global energy jobs relied on data from Organisation for Economic Co-operation and Development (OECD) countries, which excluded major players like India, Brazil and China. To expand their view, the research team built their own global data set covering around 50 countries. The dataset focused on 11 energy technologies and five job categories: construction and installation, operation and maintenance, manufacturing, fuel production and refining.

The team then used a model to determine what would happen to global jobs under two scenarios: one in which current policies continued and another in which world leaders acted to meet the Paris agreement goal of limiting global warming to well below two degrees Celsius above pre-industrial levels.

In the first scenario, energy jobs would continue to grow, rising from 18 million today to 21 million by 2050. But the researchers found that they would grow even more if we act to resolve the climate crisis, reaching 26 million by mid-century.

Of course, the makeup of those jobs would change in a climate-action scenario. Today, the researchers calculated that there are 12.6 million people working in fossil fuel industries, 4.6 million in renewable energy and 0.8 million in nuclear. In the Paris-agreement scenario, that balance would shift to 3.1 million working in fossil fuels and 22 million working in the renewable sector. Fossil-fuel extraction in particular would be hard-hit, making up around 80 percent of job losses, but renewables would more than make up the difference. Wind and solar in particular would take off, representing more than 85 percent of renewable sector gains. In total, 84 percent of 2050 energy jobs would be in renewables, with only 11 percent in fossil fuels and five percent in nuclear.

Former President Donald Trump, for example, justified his decision to withdraw the U.S. from the Paris agreement by proclaiming his love for coal miners, the study authors pointed out. Australia's current Prime Minister Scott Morrison, in addition, won a campaign in which he promised to protect fossil-fuel jobs. The new findings can help assuage some of the fears these leaders tap into with their anti-climate-action rhetoric.

"The point is that the number of jobs that could be created if we move to a sustainable economy will be a gain," Emmerling said.

While the research found that there would be a global net gain in energy jobs, Emmerling acknowledged that there would be some losers on the local, national and regional level. Fossil-fuel exporting countries like Mexico, Australia, Canada, South Africa and sub-Saharan Africa all stood to see net-losses by 2050 in a climate-action scenario. China was set to lose energy jobs no matter what because of a decline in coal mining, but it also has great potential to take advantage of a green transition because it currently leads the world in solar PV manufacturing. For many other countries, however, any loss would be offset. The U.S. could gain more than a million jobs by 2050 by honoring the Paris agreement.

In addition, the nature of renewable energy jobs means there is more potential for different nations to take advantage of growth in the sector, especially when it comes to manufacturing.

"Future renewable energy manufacturing jobs differ from other job categories as there is nothing physically tying these jobs to a particular geography in the same way that coal mining has to happen where coal deposits are located," the study authors wrote.

Because of this, the researchers were not able to accurately model where manufacturing jobs would end up in the future, meaning that countries have a chance to shape their energy future through industrial policy. While China currently dominates the making of solar PVs, there is no reason that this has to remain the case. The researchers therefore suggested that nations currently reliant on fossil-fuel exports actively promote renewable manufacturing to offset potential losses, as India, for example, is already doing.

"These jobs are up for grabs for countries who invest in these technologies," Emmerling said.

That said, a transition to a renewable energy economy will doubtless impact individual communities and workers who have long relied on fossil-fuel extraction for income. This is why many environmental campaigners have called for a "just transition" that would compensate these communities and retrain these workers.

The study authors argued that any program of this nature requires an accurate understanding of both potential job losses and gains, which is something their work provides. Next, they hope to fill out the picture by looking at the quality and types of new energy jobs, including wages, skill level and necessary training.

Ultimately, however, the study results affirm the possibility of a just transition by demonstrating that there is "room for compensating," as Emmerling put it.

"There is a pie to be shared and distributed, and in the end the pie will be bigger," Emmerling said. 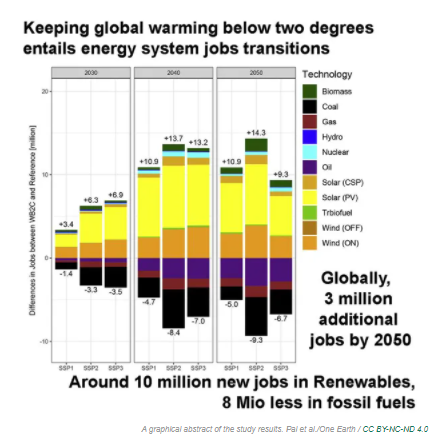