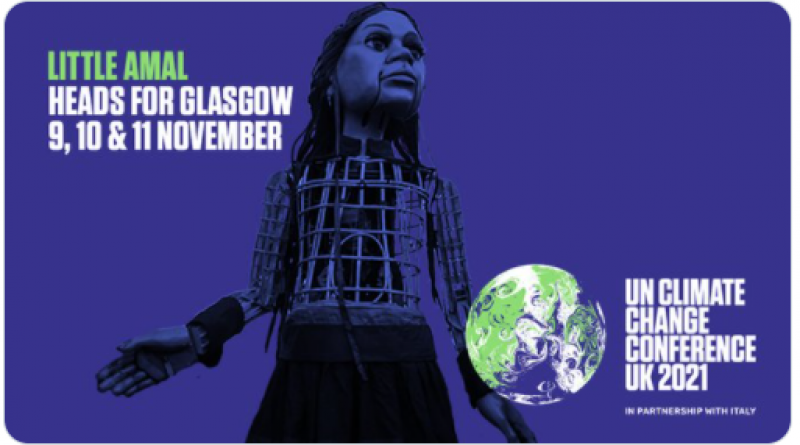 Little Amal, a 3.5m puppet of a 10-year-old Syrian refugee, will visit the 2021 United Nations Climate Change Conference COP26 from 9 to 11 November. This follows her completion of The Walk, a 4 month travelling festival of art and hope over 8000 kilometres from the Syrian border to Manchester.

Little Amal has been invited to open the Gender Day high-level event in the COP26 Blue Zone alongside young Samoan climate activist Brianna Fruean to represent young women and girls from the global south on this world stage. Little Amal will also appear in the COP26 public Green Zone. In a collaboration with the National Theatre of Scotland, the Citizens Theatre and Perth Theatre, Amal will meet young people and communities from across Glasgow. She will close The New York Times Climate Hub on 11 November.

Little Amal began her walk in Gaziantep, Turkey on 27 July. Her journey across Turkey, Greece, Italy, Switzerland, Germany, Belgium, France and the UK in search of her mother shone a light on the millions of displaced children who have made similar journeys out of acute danger in search of refuge. As she ended her journey in Manchester on 3 November she was welcomed into a new community within which she can begin to build a new life.

Many of the young people Amal met on her journey have been forced to leave their homes due to violence, persecution, war or poverty.  These circumstances are often caused or heightened by the climate crisis. At COP26 Little Amal will meet changemakers from many of the countries she has visited all of which are being directly affected by the climate crisis. She will stand alongside them as they embody and express the urgent need to take action.

“I am looking forward to welcoming little Amal to Gender Day at the UN climate talks in Glasgow. On her journey, she has crossed areas already experiencing drought, extreme weather, heat and wildfires, and all the conflicts and crises that a heating world produces. The difference is, she is a puppet and I am real. For a decade now, the storms in the Pacific have been getting more violent, the droughts have been longer and the floods deeper. Fishers cannot feed their families. Family-owned shops that are flattened in a cyclone are rebuilt, only to be destroyed by rising water.

But what Amal represents is that people like me, people like her, we refuse to be just victims to this crisis. We are not drowning, we are fighting and the world will hear us.”

"Little Amal has been on a long journey to get to #COP26. She has crossed areas already experiencing drought, extreme weather, heat and wildfires, and all the conflicts and crises that a heating world produces. She has passed the weapons, walls, and cages with which powerful countries are arming themselves to repel, injure and even kill future displaced people – a project they spend more on than helping prevent climate-linked displacement.

Migration is barely on the agenda at the UN climate summit, yet as climate impacts escalate, more people will be forced to leave their homes in search of safety and dignity. Yet current policies see corporate actors profiting, from increasing public expenditure on these policies.

These companies, their financiers and investors who are already profiting from the misery of others and those that are preparing to do so in the near future, need to be stopped. We need an approach to climate-linked displacement that is rooted in equity and dignity and will work to advance human rights for all."

Little Amal will open the Blue Zone Gender Day high level event at the COP26 Conference to 800 delegates alongside keynote speaker Brianna Fruean, the Samoan climate activist and youth representative of the Pacific Climate Warriors Council of Elders who, at the age of 11, became a founding member of 350 Samoa. Amal will meet members of the Green New Deal Alliance including Caroline Lucas MP and tour the Blue Zone meeting delegates within the negotiating zone of COP26.

Little Amal will walk from the Blue Zone across the iconic Millennium Bridge to the banks of the Green Zone with young activists including Luisa Neubauer, KC Shreya, Elizabeth Wathuti and Farzana Faruk and other members of the MAPA (Most Affected People and Areas) youth, and actress and activist Katja Reimann. She'll be accompanied by a soundscape of young leaders’ voices, collected by Connect4Climate to echo the Pre-COP26 Youth4Climate summit manifesto, playing out across the COP26 site, with sound design by Xana and design by Camilla Clarke.

Within the Green Zone, Good Chance will discuss migrant justice and climate justice with guests from 350.org and Choose Love, author Onjali Rauf (The Boy at the Back of the Class), Connect4Climate youth leader, Elizabeth Wathuti, from the Pre-COP26 Youth4Climate summit and Kehkashan Basu, contributor to The Global Youth Climate Inquiry, an initiative of One Young World, Mishcon de Reya LLP and the Democracy and Culture Foundation.

Little Amal will travel with over 160 school children bearing banners of their climate demands and hopes along the banks of the Clyde in an event with National Theatre of Scotland, Citizens Theatre and Perth Theatre. The children's work will transform into a collective banner that fill the walls at Anderston Quay and together they will plant seed pods in a moment of collective and connected action, each seed representing a young person affected by climate chaos.

Little Amal will journey through the historic community of Govan alongside 10 metre tall sea goddess puppet STORM, who is made entirely out of recycled and natural materials, created by Scotland-based visual theatre company Vision Mechanics. STORM has been travelling through Scotland, carrying a message of the oceans in crisis.

Amal will appear in the centre of Glasgow alongside 100 performers from around the world with voices in over 20 languages interweaving across the streets, with artistic direction from Connie Treves, sound design by Matthew Herbert, movement direction by Robby Graham for Southpaw Dance Company and Natalie McCleary, costume design by Vivienne Low.

Little Amal will walk through the streets bearing a burned tree symbolising the burning forests she walked through in Turkey and Greece.

As the finale of The New York Times Climate Hub, Amal will stand in the centre of Es Devlin’s ‘Conference of the Trees’ alongside young climate activists from across the world.

The Walk was produced by Stephen Daldry, David Lan, Tracey Seaward and Naomi Webb for Good Chance Theatre in collaboration with the Handspring Puppet Company. The Artistic Director was Amir Nizar Zuabi.