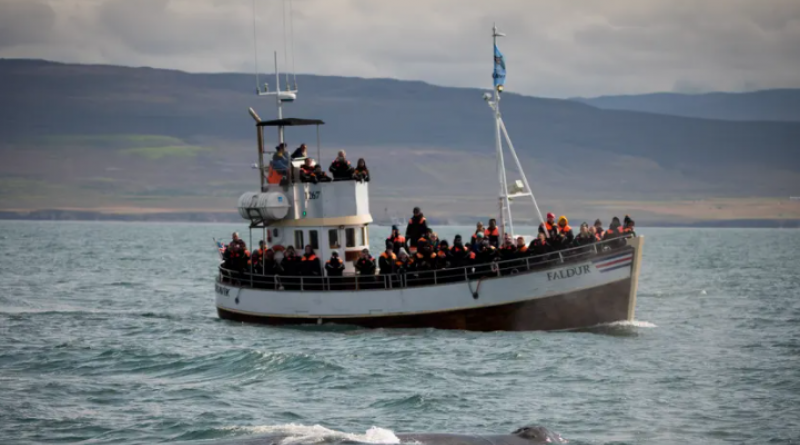 A carbon-neutral tour off Húsavík, in north Iceland, makes for a greener, more peaceful experience for visitors and sea creatures

‘Look! Look! Over there …” The boat listed dramatically as 50 passengers raced to its starboard side.

Seconds earlier someone had spied the distinct blow – a spray of airborne water – that signalled a whale was about to emerge. A silence fell over the crowd as we waited, patiently.

“Port side. Quick,” called the spotter from the crow’s nest and everyone shuffled to the opposite rail. A shiny black fin rose from the water, while two flashes of white – its pectoral fins – could be made out beneath the surface.

“Watch for the tail,” came the cry, and the crowd gasped as the humpback revealed its fluke, dripping with water, before diving back into the waters of mountain-edged Skjálfandi bay.

It’s the kind of scene I’ve been lucky enough to witness many times when watching whales around the world: the silence of anticipation, followed by the cheer of the sighting. Then – after the encounter – the enthusiastic chatter and cries of otherwise level-headed strangers suddenly hugging each other with joy. All of this against the noise of rumbling and roaring diesel engines.

This particular encounter, off the northcoast of Iceland, was different. This time the whoops of delight and exhilaration were the only sound. We were on a silent, electric boat – a kind designed especially for whale-watching here in Húsavík.

It’s the brainchild of North Sailing, the company that, in 1995, pioneered whale-watching in Iceland (prior to this the only value cetaceans were seen to have was as food, hunted and, predominantly, shipped to Japan). This move made the town the “whale capital of Iceland” – and the firm since determined to find a carbon-neutral way of getting up close to the whales. My visit was pre-Covid, but the three-hour excursions are running again, albeit with a reduced capacity per sailing.

“We tried it first about five years ago,” North Sailing’s Arngrímur “Aggi” Arnarson had said before I headed out on the water. “We invested in a project to convert one of our sailing boats to have a backup electric engine rather than diesel, so that it would rely on wind and battery power only.”

The now-electric Opal set sail triumphantly, and another boat has since been added. In a wonderful reversal of use, former diesel whaler Andvari – named for the old Norse that means a gentle breeze that glides silently through the air – now also silently takes people out to shoot marine mammals with cameras rather than harpoons. Both craft are charged from the 100% renewable hydro and geothermal energy that powers most of Iceland.

“Some people ask if they need to be quiet on board,” laughed Aggi. “Of course they don’t, but it does seem to inspire it.”

I noticed a gentle calmness on the waves. And, without the racket of an engine to shout over, people seemed to speak in muted tones.

Even the ship’s captain, Cristian, loved the new arrangement: “After a day on this boat I come back to shore and I have no headache,” he said as we sat, peacefully, in the wheelhouse scanning the water for signs of one of the 23 species often spotted here. The most common are humpback, minke, white-beaked dolphin, sei and harbour porpoise – all of which I saw – with blue whale, orca, pilot whale and sperm whale spotted less frequently.

Over three days, I went out on Andvari and Opal on several occasions, inspired to take it slow, and linger in one place. But it’s not just passengers and crew who benefit from an electric engine. Several scientific studies suggest, unsurprisingly, that whales exhibit less signs of stress in quieter waters.

“I’ve seen the whales come much closer and stay for longer,” said Roderick, a boat-builder-cum-whalewatch-guide with North Sailing, who came to Húsavík several years ago from Switzerland and never left. I headed out with him on the second day of my visit. We were joined for about a mile by a curious minke whale, a school of dolphins danced in front of the bow and, in addition to one humpback lingering under and beside our vessel for an hour, we also sighted a pod of five.

“You really hear the whales when they come up and breathe. It’s so calming, and I think it makes people have a more meaningful connection to them. It’s even changed locals’ opinions on whales now they’ve seen the tourists come in,” said Roderick.

Prior to Covid, the tourists did come – in their thousands – and the hope is that it won’t be long before they return. Iceland is one of the few countries currently on the UK’s green list. In 2020 the film Eurovision Song Contest: The Story of Fire and Saga, starring Will Ferrell and Rachel McAdams, kept the town in the spotlight after title song Húsavík was nominated for an Oscar. This prompted locals to launch a video extolling the town’s beauty.

“You have, on average, about 300,000 people arriving in Húsavík to see the whales each year – that’s nearly the same as the population of Iceland,” said Tom Grove, a volunteer at the town’s Whale Museum, who is also studying the impact of whale-watching on sea life at university. “As watching has increased there has been a decrease in support for whaling locally.”

The whales come to the waters off Húsavík looking food, the tourists arrive hot on their tails, and the town has begun to generate new attractions to keep them there. The harbourside Gamli Baukur restaurant, for example, is made from reclaimed parts of whaling ships and is a proud member of the Meet Us Don’t Eat Us campaign, encouraging visitors to abstain from sampling whale meat. Húsavík Öl is a microbrewery in the old dairy house, which brews using locally foraged ingredients (think birch and juniper).

Then there is a much smaller and less-touristy version of the Blue Lagoon near Reykjavík. GeoSea spa is a saltwater borehole discovered by locals who would bathe in it at the end of a long day, and where I ended day three of my trip. On top of the west-facing sea cliffs, it offered the perfect place to toast a long weekend of sighting marine mammals and watching the sunset from an infinity pool, while dolphins frolicked in the waves below.

On my last morning, I went back out to see the whales. There, amid the high-speed inflatables and diesel-powered vessels, I noted that the whales seemed to linger longer alongside ours. But although North Sailing has offered competitors blueprints so they can make their vessels carbon neutral, too – choosing benefit to whales and the environment rather than profit margins – no other operator has taken that step so far.

Before we headed back to land, a humpback performed a breach – leaping skyward from the water – shocking us all into an even more pronounced silence. A suitably quiet end to the most memorable of trips.

UK Government urged to include aviation and shipping in net zero legislation.