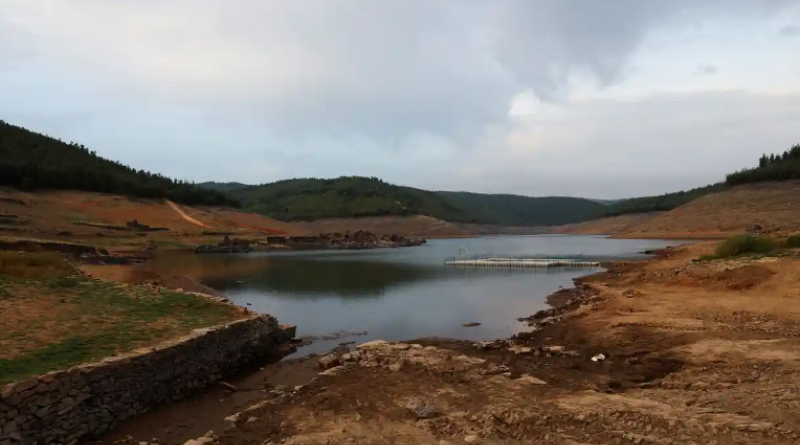 Cláudia Agostinho has been going to Pedrogao beach since she was a child. Back then it was a stretch of silver white sand sandwiched between pine trees and sea.

Today Pedrogão beach, in central Portugal, is an apocalyptic reminder of the carnage and violence that can be brought by global heating. This summer, as temperature warnings were again issued in the Leiria region – where the beach is situated – and several active wildfires raged, the charred remains of the deadliest fire in Portugal’s history were still evident.

When the wildfires of 2017 raged through the region devastating an area four times the size of Lisbon, 66 people were killed, more than 250 injured and 20,000 hectares (49,400 acres) of forest were destroyed. The impact of rising global temperatures and the anxiety at the failure by countries to curb greenhouse gas emissions have led Agostinho, 23, a nurse, to a David and Goliath battle with powerful European governments.

As heat and drought plays out once more in her region and across the country, Agostinho, her siblings and her cousins are preparing to see a tenacious fight take centre stage at the European court of human rights. After nearly five years, their case against 32 European countries – arguing their climate policies are inadequate – will be heard in front of 17 judges in the autumn.

Gearóid Ó Cuinn, of Global Legal Action Network (Glan), the organisation supporting Agostinho and her family, said: “The fact that the court has referred this case … to the grand chamber is an extremely significant development which shows how serious a human rights issue it considers climate change to be.”

Their case joins other climate litigation due to go before the court grand chamber in the coming months. A French mayor, Damien Carême, is taking action against his government’s failure to tackle climate breakdown. Carême, who is mayor of Grande-Synthe in northern France, says his town faces a long-term threat of submersion if sea levels rise. Another climate case involves a group of women, Senior Women for Climate Protection Switzerland, taking action against the Swiss government for failing to adopt an adequate climate protection policy.

Agostinho said the move to a hearing at the Strasbourg court was happening as her region and the rest of the country was suffering again from extreme weather: “I was driven to do this because of the anxiety I feel about what is happening, and what will happen if we don’t take any action. And now we are suffering again from the heat here, and I think to myself, ‘Do I want to bring children into this world if there is no good future for them?’, and I feel that something has to be done, the way we all live is not sustainable.”

The young people are crowdfunding the legal battle. They argue that the climate crisis interferes with their right to life, their right to respect for their private and family lives, and their right not to be discriminated against.

Sofia Oliveira, another claimant, said: “We have been experiencing more very worrying and stifling heat extremes in Portugal this summer compared with last year, so it gives us an encouraging sense of hope to hear that the court has ruled our case so important it needs to be decided by 17 judges.

“Now we hope that these judges will hear our case as soon as possible and that they will make the European governments take the urgent measures necessary to protect us.”

If they are successful, the governments would be legally bound to ramp up their emissions cuts, but also to tackle their overseas contributions to the climate crisis, including the worldwide emissions of their multinational companies.

The group will argue to the judges that the forest fires that have occurred in Portugal each year since 2017 are a direct result of global heating. They allege a risk to their health on account of these fires, and assert they have already experienced disrupted sleep patterns, allergies and respiratory problems as a result, which are aggravated by the hot weather. The fifth and sixth applicants stress that climate disruption is causing very powerful storms in winter and maintain that their house, which is situated near the sea in Lisbon, could be at risk of damage from storms.youth