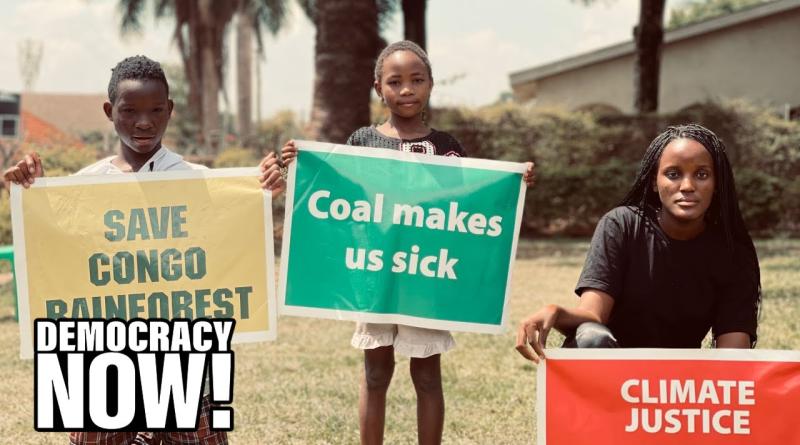 As heat waves scorch much of the globe, we look at who bears the brunt of the climate emergency and go to Kampala, Uganda, to speak with climate justice activist Vanessa Nakate. “The climate crisis has been here. It has been impacting the lives of so many people on the African continent, which is responsible for less than 4% of the global emissions,” says Nakate. “Media has a huge responsibility to cover the climate crisis, but it has a much bigger responsibility to cover the climate crisis in the places where people are already suffering some of the worst impacts.” This comes as a new study finds U.S. greenhouse emissions have caused nearly $2 trillion in damages to other, mostly poor, countries.

This is a rush transcript. Copy may not be in its final form.

AMY GOODMAN: This is Democracy Now! I’m Amy Goodman, with Nermeen Shaikh, as we look at who bears the brunt of the climate emergency.

Meanwhile, a new Greenpeace UK report makes the link between the climate emergency and the legacy of colonialism, which it says, quote, “established a model through which the air and lands of the global South have been … used as places to dump waste that the global North does not want.”

A study by CARE International found the 10 most underreported humanitarian crises in 2021 were concentrated in the Global South, with six in Africa alone.

For more, we go to Kampala, Uganda, to speak with climate justice activist Vanessa Nakate, author of A Bigger Picture: My Fight to Bring a New African Voice to the Climate Crisis. In a Twitter thread this week, Vanessa lamented how little the Western media covers the disproportionate impact of the climate crisis on Africa.

Vanessa, welcome back to Democracy Now! Tell us what the world should understand about what’s happening, not only in Uganda, but on the African continent, as we deal with this global climate emergency.

VANESSA NAKATE: Thank you so much.

It’s important for the world to know that the climate crisis hasn’t just started. The climate crisis has been affecting the lives of so many people right now. When I speak from my country, because of the rising global temperatures, we have seen changes in weather patterns that have caused, you know, events like floods, like landslides and droughts. Currently, over 500,000 people in the region of Karamoja are starving because they have no food to eat. And when you go beyond Uganda, we are seeing a drought that has left over 20 million people with no access to food in the Horn of Africa.

So, what I want people to understand is that the climate crisis has been here. It has been impacting the lives of so many people on the African continent, which is responsible for less than 4% of the global emissions. But while Africa is on the frontlines of this crisis, it is not on the front pages of the world’s newspapers.

NERMEEN SHAIKH: Vanessa Nakate, as you point out, Africa is responsible for less than 4% of global emissions, and, of course, the cumulative population of Africa is just over 17% of the global population. Now, you recently retweeted an article headlined “7 Stunning Facts About How Climate Change Is Hitting Africa the Hardest.” Among those facts, almost a quarter of a billion Africans will face water scarcity in just three years — that is, by 2025. In southern Africa, tropical storms displaced half a million people in just three months this year. And one in three deaths from extreme weather occur in Africa. Could you elaborate on this and why you think the coverage of this is so limited?

VANESSA NAKATE: Well, first of all, I’ll say that media has a huge responsibility to cover the climate crisis, but it has a much bigger responsibility to cover the climate crisis in the places where people are already suffering some of the worst impacts. When we talk about things like food scarcity, things like water scarcity, these are things that are already happening right now in the African continent. For example, in the region of Karamoja, like I said, in Uganda, people are struggling to find something to eat, to find water. In the Horn of Africa, over 20 million people are struggling to find food, to find water. And in the process, even the people’s livestock are perishing.

So, when we say, you know, that water scarcity is going to be a challenge for so many people on the African continent in just three years, it doesn’t mean that the scarcity will start when those three years are finally finished; it is something that is happening right now. When we talk about people being forced to leave their homes to find somewhere to stay, it’s not that that is something that is coming in a few years; it is something that is already unfolding. We know that over 86 million Africans are going to be forced to leave their homes, to look for places where they can stay, where they can exist, because of the climate crisis. Same with climate change. When we talk about the climate crisis going to escalate and affect so many communities, so many people in just a few years, it doesn’t mean that the crisis is coming in those years. It means that it’s already happening right now, but it’s just going to make the lives of so many people harder and affect the livelihoods of so many communities.

NERMEEN SHAIKH: And, Vanessa, a recent study showed, on top of this massive climate crisis that Africa is facing, that many countries in Africa, 11 of them, will have to spend five times more on climate adaptation than they do on healthcare — among these 11 countries, Cameroon, Chad, the DRC and Sudan. These countries are among the least to contribute to global emissions. On average, they emit 27 times less per person than the global average, not even the average of countries in the North. So, could you explain what climate adaptation involves and why there’s so little financing for it for these countries that face the worst effects and have been responsible for so little of the emissions?

VANESSA NAKATE: Yes. I will, first of all, say that that’s one of the inequalities, the horrible inequalities, of the climate crisis, that those who are not responsible are suffering the worst impacts. And they have to spend so much for mitigation and adaptation of their communities.

We know that $100 billion was promised for vulnerable communities, vulnerable countries, that are on the frontlines of the climate crisis. But it was only promised, and it wasn’t delivered. But it’s important for people to know that the $100 billion is no longer enough. The climate crisis has pushed so many countries in Africa in places where they cannot adapt anymore. We are experiencing loss and damage in so many places. So now the demand is not just for climate finance, for mitigation and adaptation. There is a demand for a loss and damage facility to address the loss and damage that is already happening.

AMY GOODMAN: Vanessa Nakate, yeah, I think what’s happening in the United States is a microcosm of what’s happening in the world. President Joe Biden created an Office of Climate Change and Health Equity within the Health and Human Services Department to prepare the nation’s healthcare system to deal with the growing and inevitable disparate health effects of extreme heat and dangerous storms and worsening air pollution. While that office has been created to deal with climate affects, the inequity of them, Congress has not funded it. And then you look at the rest of the world and the relationship of the United States, the massive effects of our policies in climate and what it — the effects it has on places like Africa. But I wanted to ask you about the war in Ukraine. And talk about this coming together of both the effects of the war in Ukraine on Africa, as well as coming on top of this ongoing climate emergency.

VANESSA NAKATE: Yes. I will start by saying that we are in a system that is allowing so many of these problems to happen. It’s like we are in one room, and if one part of the room is affected, eventually, the entire building will come crumbling down. If it’s a puzzle, if one part of the puzzle — if a piece of the puzzle is missing, then that puzzle can never be complete. So, a system can never be complete if one of the things is not well.

And we know that the war in Ukraine is a war that is being funded by fossil fuels. And many activists, many people have been organizing to demand a shift from fossil fuels to renewable energy, because we’ve seen that fossil fuels are not only destroying our planet and the lives of so many people, but they are also fueling and funding wars in many parts of the world. So, it’s important to note that we have to change the system to address many of these challenges.

NERMEEN SHAIKH: And, Vanessa, finally, you’ve spoken out against the East African Crude Oil Pipeline, also being built by the French oil giant Total and the China National Offshore Oil Corporation. If and when it’s completed, it will be the longest heated crude oil pipeline in the world. Can you talk about your concerns about this pipeline, and specifically the areas that it’s expected to run through?

And as activists, we face many challenges, especially in our communities, where people think that we are against the development of our countries. We are not against the development of our countries. We want the best for our countries, and we know that there is no future in the fossil fuel industry. What our countries need is a transition to clean energy, a transition to renewable energy, because this is something that will help lift people out of poverty, because I know and understand that our countries are trying to lift their communities out of poverty. And corporations like Total are taking advantage of this, knowing how much oil, coal and gas are causing so many challenges in many communities. We are seeing some European countries run for gas still in Africa. So, it’s important for people to know that we want the well-being of our communities, the well-being of the people in our countries. We want the well-being of the economies of our countries. But we don’t want it funded by fossil fuels, because there is no future in that. We want a transition to renewable energy, to clean energy, to ensure that we not only have healthy people, but we also have healthy economies, healthy planet — a healthy planet and a healthy future for all of us.

AMY GOODMAN: Vanessa Nakate, we want to thank you for being with us, climate justice activist, joining us from Kampala, Uganda, author of A Bigger Picture: My Fight to Bring a New African Voice to the Climate Crisis.

Coming up, we go to George Monbiot in Britain, where temperature records have been shattered this week, sparking fires across London. Stay with us.