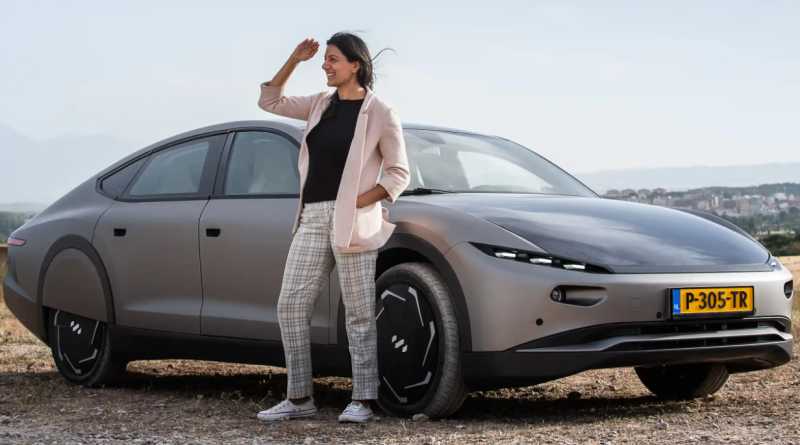 Makers of the €250,000 Lightyear 0 hope to convince drivers it can be a viable climate-friendly alternative

Winding past the ochre-coloured plateaux of the Bardenas Reales natural park in northern Spain, Roel Grooten nudged me to take my foot off the accelerator.

The car continued to barrel down the open stretch of road, its speed dipping only slightly. “It keeps on going,” said Grooten, the lead engineer for the Dutch car company Lightyear, as we whizzed through the lunar-like landscape. “What you feel is nothing holding you back. You feel the aerodynamics, you feel the low-rolling resistance of the tyres, of the bearings and the motor.”

It is this streamlined design that the company credits for allowing it to muscle its way into a space long overlooked by most car manufacturers. As early as November, the company will start delivery of what it describes as the “world’s first production-ready solar car” – the Lightyear 0, a €250,000 (£215,000) sedan draped in 5 sq metres of curved solar panels that top up the electric battery while the car is driving or parked outdoors.

“If we would have the same amount of energy that we harvest on these panels on any other car that uses three times the amount of energy to drive, it becomes useless. It becomes a very expensive gimmick,” said Grooten. “You have to build this car from the ground up, to make it as efficient as possible, to make it this feasible.”

In optimal conditions, the solar panels can add up to 44 miles a day to the 388-mile range the car gets between charges, according to the company. Tests carried out by Lightyear suggest people with a daily commute of less than 22 miles could drive for two months in the Netherlands without needing to plug in, while those in sunnier climes such as Portugal or Spain could go as long as seven months.

But whether the company’s gamble on solar will pay off remains to be seen, said Jim Saker, professor emeritus at Loughborough University and president of the Institute of the Motor Industry.

“You’re having to pay an awful lot of money and have solar panels stuck on the car for just 44 additional miles. The question mark at the moment is the fact that, in reality, is that actually worth it? The actual concept isn’t bad. It’s just whether the technology is actually viable to make it economically sustainable for anybody wanting to do this.”

Sales of the Lightyear 0 would probably be limited to a handful of early adopters, he added. “But in reality, it’s not a commercial proposition at the moment.”

Others questioned the idea of a car being touted as a salve to the ever deepening climate crisis. “The most sustainable way to approach car ownership is actually to avoid it entirely, if you can at all,” said Vera O’Riordan, a PhD student focusing on low-carbon pathways and policies for passenger transport at University College Cork in Ireland.

While electric vehicles may have a limited role to play in rural areas that lack public transport, she cited research suggesting these vehicles are often sold to high-income households in urban areas. “So you have to ask yourself the question: are you serving this individualised, very inefficient, very harmful and traffic-inducing transport in urban areas where it could otherwise be perfectly met by public transport and walking and cycling?”

The need to move away from cars to tackle the climate emergency is – perhaps surprisingly – echoed by Lex Hoefsloot, the 31-year-old chief executive of Lightyear, who has raised about €150m in investment to get it running.

“It would be great, I fully agree,” he said. “But I think we’re not going to change our lives too much. Perhaps, when we’re really panicking in 20 years, we might. But in the meantime, we have to work around that.”

Since 2016 the company has championed solar energy as a key part of this work-around, envisioning solar cars capable of running on clean energy and accelerating the transition away from polluting fossil fuels. “People were saying it wasn’t possible, mostly because of the limited amount of solar power you could get on a car,” said Hoefsloot.

His own experience, however, suggested otherwise. The Lightyear 0 – a sleek four-wheel drive – traces its roots to a squat box-on-wheels that ferried four helmet-clad university students across the Australian outback to win in its class in the 2013 world solar challenge.

“If it works in Australia, then it works everywhere. That was the thinking,” said Hoefsloot, who founded Lightyear with four other members of the solar challenge team. “Early days, I must admit there was a hesitation whether we should go full car manufacturing, because we all know it’s not the easiest thing. But there was nobody else out there that was really willing to or doing something similar.”

In recent years there has been an upswell of interest in integrating solar panels into cars: Mercedes-Benz recently revealed plans to outfit an upcoming electric car with rooftop solar panels, while Toyota has at times offered limited-capacity solar panels as an add-on to its Prius hybrid.

Next year, Munich-based Sono Motors plans to roll out a €28,500 solar-assisted family car, while the California-based startup Aptera Motors said in 2020 that preorders for its futuristic three-wheeled solar electric vehicle sold out in less than 24 hours.

With months left before the Lightyear 0’s production run, there are still kinks to be worked out, from a stiff steering wheel to the buzz that at times fills the car when the air conditioning kicks in.

Once you are in the car, there is little about the driving experience that feels different from other electric cars – “That’s a huge compliment, that’s what we’re aiming for,” one staff member tells me – save for a smattering of reminders about the constant drip feed of solar energy. One screen shows exactly what cells are feeding off the sun at any given moment, while another quantifies how much solar energy is being absorbed.

In an effort to use as much of this solar energy as possible, the windswept design eschews side-view mirrors for cameras and runs off lightweight electric motors tucked into its wheels. The body panels are crafted from reclaimed carbon fibre and the interiors are fashioned from vegan, plant-based leather with fabrics made from recycled polyethylene terephthalate bottles.

The 20-minute test run is probably the only time I will sit at the wheel of the Lightyear 0. With its hefty price tag – ideally paid by those who have an outdoor parking space to maximise the car’s gain from the sun – it is not a car for the masses.

Instead, the company envisions the production run, which will offer up to 946 vehicles for delivery across Europe and the UK, as a beginning of sorts. “This is a small scale to validate to the world that we can produce a car,” said Telian Franken, the prototype team lead.

From there, the company will shift its focus to a second solar-assisted electric car it is aiming to sell for about €30,000 as early as 2025. “We’re trying to make the difference, not for the millionaire who can afford a €250,000 car, but to get us to the point where the average person can get off grid – get a reliable sustainable vehicle that beats toe-for-toe any econo-box you can get at the time,” said Franken, citing the Toyota Corolla or Honda Accord as examples. “That’s what we’re trying to beat – and replace – because it’s not sustainable.”