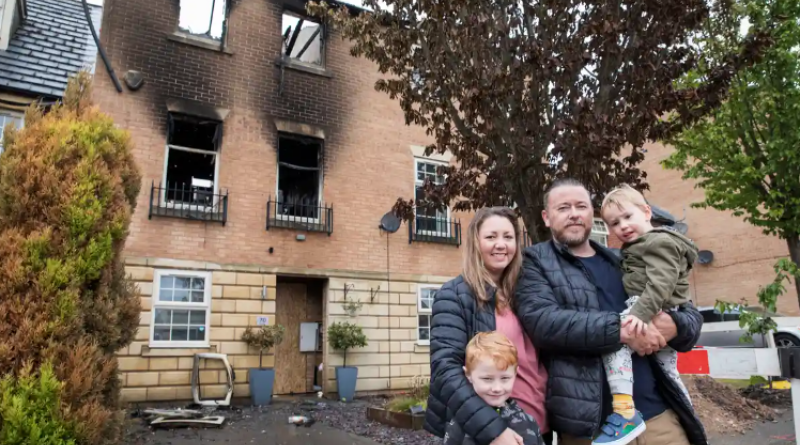 Looking at the blackened ruin of what used to be their beloved home, Paul and Lindsey Hughes still cannot believe that everything they owned in the world is gone.

The couple, along with their children Nathaniel, 6, and Benjamin, 2, were left homeless on the hottest day of the year by an enormous blaze that ripped through their home of 15 years.

“It has destroyed 20 years of memories, and our neighbours’ memories too. And now we’re having to start again completely from scratch,” Paul said. “It’s just hard to get across how our lives changed completely in under an hour.”

Shortly after lunchtime on 19 July, smoke could be seen in the meadow next to three modern townhouses on Lambrell Avenue in Kiveton Park, near Sheffield. This area had some of the highest temperatures in the country, being only 50 miles north-west of Coningsby in Lincolnshire, which set a UK record of 40.3C.

From their home office, Paul and Lindsey began to hear a loud roaring sound and they went outside to see a “fireball” heading towards a nearby house, closest to the field.

The fire service later explained that the combination of the heat and the shape of the hill meant the fire was able to move incredibly quickly and to leap suddenly to ignite the houses.

Paul said: “When I saw it burning next door’s garage, I went out to try to stop it burning his house, with the expectation that the fire service has an 11-minute callout time. Even if they were there in 20 minutes, the house would still be standing.”

But on that day, local fire services were under such demand from multiple fires across the county – including one that razed six homes in Barnsley and another that destroyed four homes in Maltby, near Rotherham – that it took nearly an hour for a fire engine to arrive.

Lindsey’s uncle Neil Mycroft, who is now hosting the Hughes family with his wife Sue, said: “It was terrible. Everyone was stood around watching the whole thing go up in flames, there was nothing anybody could do.”

Next door, 15-year-old Jocelyn Lyttleton-Frances had been home alone, as her mother, Sarah, and siblings Jack, 17, and Noah, 11, were out.

She said: “I smelt something but I didn’t realise what was happening, and then someone started frantically knocking on the door.”

It was a neighbour, who tried to help her find her two cats, “but the house was filled with smoke already so we had to leave”.

By the time the first fire crews arrived on the scene, there was nothing left of the Hughes’s home and very little was salvageable from the Lyttleton-Frances’s. The cats thankfully survived, being inside the house throughout the fire, managing to find shelter under a bed in the room that was the least badly damaged.

The families were left with nothing but the clothes they were wearing at the time and their phones, which were in their pockets. The houses have no roofs, barely any windows, and the insides of most rooms are now bare brick and completely unrecognisable.

Since Tuesday, the houses have reignited several times and, though it was mild and drizzly on the Friday following the fire, the families returned – in borrowed clothes and shoes – to find fire crews putting out smoking embers.

They are not alone in their ordeal. Dozens of families across the country are finding themselves caught up in the same process after last week’s heatwave and fire services are warning that with climate change and budget cuts, this may only be the start.

Matt Wrack, the general secretary of the Fire Brigades Union, said: “We have warned of the growing threat for years but our concerns have fallen on deaf ears. The brutal truth is that government ministers and chief fire officers have ignored the warning signs, which have been obvious for all to see. They are guilty of criminal complacency.”

A Home Office spokesperson denied services had been cut and said each fire service was responsible for planning its own risks.

The Hughes family did not blame anyone for what happened, but encouraged politicians to see the human side of such events, which up until now have been rare.

“It’s almost seen as an acceptable loss,” Paul said, “so perhaps that’s why it doesn’t seem to be on anyone’s agenda.”

In a nearby cafe named Resti, owned by Paul and Lindsey’s friends Anna and Hubert Czajka, who looked after the family in the aftermath of the fire, they talked about beginning to pick up the pieces of their lives.

It could take two years before their homes are rebuilt and both the Lyttleton-Frances family and the Hughes family are now looking for somewhere to rent in the meantime, which is proving “impossible” in such a small village.

Though they were fully insured, Paul said: “All the documents we need were in the house. It will take months to untangle that.”

The Hugheses are trying not to be sentimental about their lost belongings, but it hurts to think that there were irreplaceable items such as old family photographs, especially of their parents who have passed away, and items from when the children were babies that they will never see again.

In the cafe, a woman they did not know approached the family and handed over a bag of clothes and toys.

“That’s been happening a lot,” said Lindsey. “People have been so good to us. I can’t tell you how great people in the community have been. We just can’t thank everybody enough.”