India: Financing options must be scaled up to boost adoption of rooftop solar 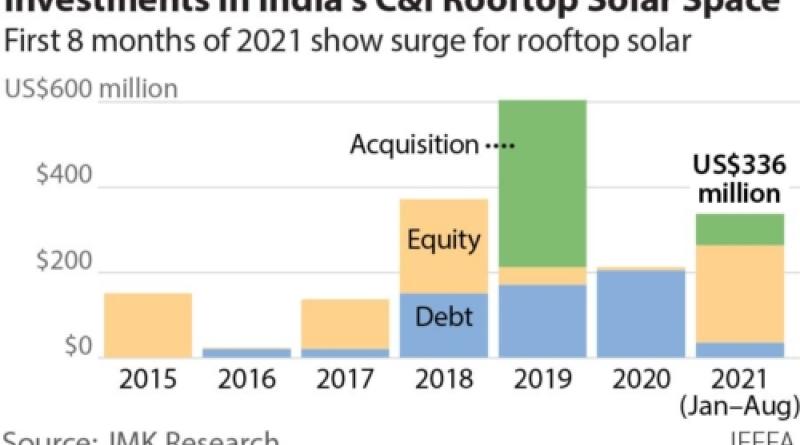 Micro, Small and Medium-sized Enterprises (MSMEs) could be the next drivers of growth.

29 September (IEEFA India): Micro, Small and Medium-sized Enterprises (MSMEs) could be the key to accelerating the adoption of rooftop solar in India – but financial institutions are often reluctant to lend to MSMEs because they prefer borrowers with strong financial track records and good corporate credit ratings.

A new report by the Institute for Energy Economics and Financial Analysis (IEEFA) and JMK Research, ‘Financing Trends in the Rooftop Solar Commercial and Industrial (C&I) Segment in India’, notes that much of the growth in installations so far has been driven by a few large creditworthy customers.

MSMEs could play an important role in achieving India’s ambitions of large-scale uptake of rooftop solar if accessible financing options were made more readily available to them, says lead author Jyoti Gulia, Founder of JMK Research.

“MSMEs are as yet an untapped segment and could be the next drivers of growth in the market, especially considering the significant electricity cost savings offered by the adoption of rooftop solar,” says Gulia. “Textiles, food and packaging are among the industries with lots of potential.”

The report notes that rooftop solar installations are financed through equity investments, debt capital, mergers and acquisitions, and loans or concessional financing such as the US$625 million World Bank-State Bank of India (SBI) and the Green Climate Fund (GCF)-Tata Cleantech credit lines.

Since 2015, rooftop solar project developers have raised more than US$2 billion, 48% (US$985 million) of which came from equity funding and 29% (US$599 million) from debt. Around 45% of these investments was raised in the first eight months of 2021 alone. 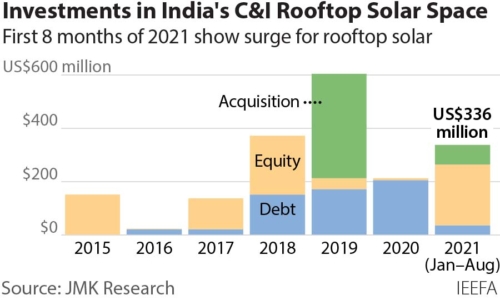 “The C&I rooftop solar segment has seen a sudden surge despite COVID-induced disruption,” says Gulia. “This indicates a significant growth trend ahead.”

Almost all (99%) of the equity investments in rooftop solar came from foreign entities looking to tap the Indian market, given the high growth potential and healthy return on equity (ROE).

The report notes that over the last five years, a majority of the funds raised through equity and debt routes has been concentrated among four active players in the segment: Amplus, Fourth Partner, CleanMax and CleanTech.

“While these four players have been successful in raising funds for their projects and sustaining their business, the sector has seen many major players including Statkraft India, Sterling & Wilson and Azure Power exit the market due to shrinking margins and regulatory setbacks by distribution companies (discoms),” says Gulia.

Reduced demand among this limited customer base has led major developers to look to foreign markets for potential growth opportunities, and also to build offsite open-access private solar parks that cater to the C&I segment.

Although an untapped segment, MSMEs face many barriers when it comes to obtaining financing for rooftop solar installations including insufficient credit history, lack of collateral, and long-term uncertainties in their businesses. These factors also mean renewable energy service companies (RESCOs), which own and operate solar plants for the consumer, can be unwilling to work with MSMEs.

Credit enhancement schemes like the World Bank’s upcoming first-loss guarantee fund and a US$41 million line of credit from the U.S. Agency for International Development (USAID) and DFC are examples of steps being taken to make financing for rooftop solar more accessible, says co-author Vibhuti Garg, Energy Economist and Lead India at IEEFA.

“As well as loans available from national and regional banks and non-banking financial companies (NBFCs) we are also seeing engineering, procurement and construction (EPC) contractors such as Tata Power Solar and Orb Energy starting to offer one-stop financing options bundled with their rooftop solar products.”

The report notes this type of financing is likely to scale up, particularly as most big lenders and concessional credit lines are largely focused on the major rooftop solar developers.

And it also highlights positive developments such as tie-ups Tata Power-SIDBI and Encourage Capital-Electronica Finance Limited that specifically cater to MSMEs.

The report outlines recommendations for stakeholders and policymakers to make rooftop solar a more viable and attractive option to MSME customers, including:

India added 521 megawatts of rooftop solar in quarter, a 517% jump