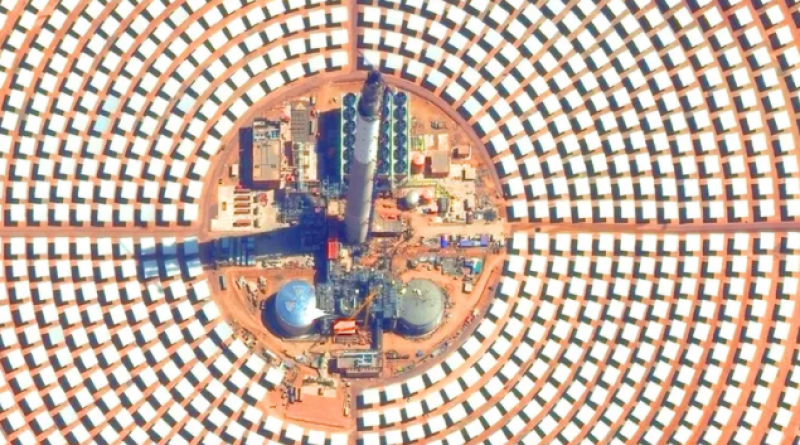 Morocco has become famous for its vast, world-leading solar arrays. But these mega-projects are just the start of the action on climate change that Morocco could be capable of delivering.

Morocco has made a name for itself as a climate leader. Renewables make up almost two-fifths of its electricity capacity, some fossil fuel subsidies have been phased out and the country lays claim to some of the world's largest clean energy projects. The country has received much praise for its actions to decarbonise.

The country's reputation may be well deserved, but it still faces real challenges – its geographical position in a warming hotspot makes it vulnerable to the impacts of climate change. And even as it seeks to end its dependence on fossil fuels, its energy demands are rising fast.

Despite these challenges, Morocco has a huge natural potential to produce solar, wind and hydropower, and has taken significant steps to realise it. Morocco's national action on climate change dates back to the mid-2000s, when the country made the decision to become a regional leader in clean energy and to push forward massive renewables projects. The country's leaders bet on these major transformations as a way to be economically competitive in the future, as well as to reduce dependence on fossil fuel imports and ensure security of energy supply, says Mohamed Alaoui, the managing director of Africa Climate Solutions, a consultancy firm based in Casablanca.

In 2009, Morocco set out an ambitious energy plan which aimed for 42% of total installed power capacity to be renewable energy by 2020. The plan drove a strong expansion of both wind and solar over the following decade, with solar photovoltaic (PV) capacity increasing 16-fold (albeit from a low base) and wind six-fold by 2020. Morocco also built the Noor-Ouarzazate complex, the world's largest concentrated solar power plant, an enormous array of curved mirrors spread over 3,000 hectares (11.6 sq miles) which concentrate the Sun's rays towards tubes of fluid, with the hot liquid then used to produce power.

Ultimately, Morocco missed its 2020 target, with enough renewable capacity to produce 37% of the country's energy in 2020. Production of energy from renewables lagged behind a little, at closer to 20% of the country's total in 2019. But the country has come a long way. Morocco has since pledged to increase the renewables in its electricity mix to 52% by 2030, made up of 20% solar, 20% wind and 12% hydro. Compared with many other countries, Morocco is doing relatively well on climate action, with its policies and pledges close to being in line with limiting global temperatures to 1.5C, according to analysis from the research group Climate Action Tracker. The country also underwent constitutional reform in 2011 to address gender inequality, known to be a powerful tool in tackling climate change as well as social injustice.

In June 2021, Morocco updated its UN climate pledge with a promise to reduce its greenhouse gas emissions by 17-18% by 2030 compared with a business-as-usual scenario, with a stretch target of a 42-46% cut on the condition of receiving international support. It has also made a significant effort to decrease government support for fossil fuels, taking advantage of low oil prices in 2014-15 to successfully phase out petrol and fuel oil subsidies.

The country has been praised for using money saved from fossil fuel subsidies to increase funds for education and to implement a health insurance scheme. However, financial support for oil products is still around $3.4bn (£2.5bn), about two-thirds of Morocco's annual budget deficit.

While Morocco's emissions are small compared with many more developed nations, burning fossil fuels for energy and cement production are still a big source of emissions in the country. Morocco still imports most of its energy to meet its rising energy consumption, which increased at an average annual rate of 6.5% between 2002 and 2015. Much of that imported energy is generated from fossil fuels. Morocco relies particularly heavily on coal power, which it is expanding along with renewables, and around 40% of electricity in the country comes from coal. However, at the COP26 climate conference in Glasgow this month, Morocco was among the 20 countries who made a new commitment to building no new coal power plants. 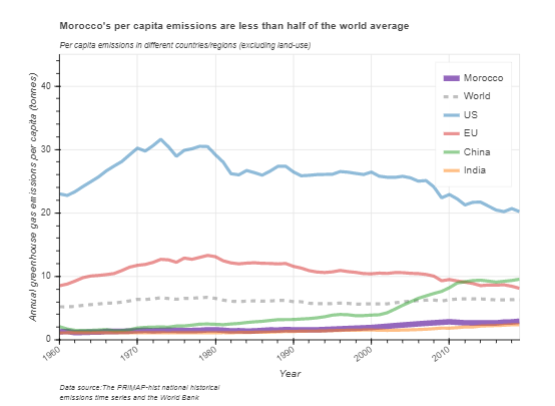 To reduce emissions, "quick and radical" transformation of industries, urban planning and infrastructure must be put in place immediately, says Fatima Driouech, associate professor of meteorology at Mohammed VI Polytechnic University and a vice chair at the Intergovernmental Panel on Climate Change.

"We must start reducing greenhouse emissions today if we are to limit warming to 1.5C and therefore the impacts of climate change," Driouech says. She notes that many of the impacts of climate change in countries like Morocco can still be avoided if we act in time. "We could hope for the eradication of poverty and the reduction of inequalities if global warming were limited to 1.5C rather than 2C or more."

In addition to relying less on coal to reduce carbon emissions, there is an argument that decision-makers in Morocco should focus more on small-scale projects and not just mega-projects, allowing entrepreneurs to answer the specific needs of different regions. "If we compare ourselves to Tunisia or Egypt, we are very advanced in macro-projects but when we talk about energy for individuals and for industries, the regulation is lacking," says Alaoui of Africa Climate Solutions. "We have a climate law but we don't have decrees that would allow people and industries to [easily] implement renewable energy." 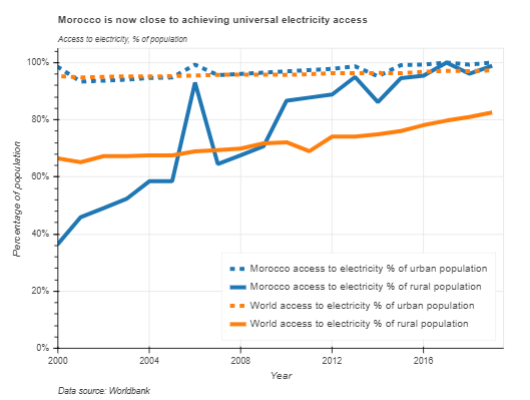 Others say that Morocco's large clean energy initiatives such as the Noor concentrated solar project have mostly benefited countries outside of Morocco, and not local people. Morocco is positioning itself as a clean energy hub with potential to export renewable power to Europe, and already has two electricity cables connecting it to Spain and plans for subsea connection to the UK. But mega-projects such as the Noor plant require extracting large quantities of water in a water-scarce region, says Mohammed Tazrouti, a campaigner for Greenpeace in the Middle East and North Africa. "When you're exporting energy, you are exporting water," Tazrouti says. "You're excluding other communities from these resources."

Greenpeace has also urged Morocco to reform and improve its renewable energy law to "make it less troublesome and bureaucratic for individuals to own and sell renewable energy". It has also pushed it to implement a law to enable the connection of small-scale renewable energy systems to the grid.

Morocco itself is already beginning to feel the impacts of climate change. Mean annual temperatures in the country are expected to increase by between 1.1C and 3.5C by 2060, depending on global climate action. The North African kingdom is located in a climate change hotspot – the Max Planck Institute for Chemistry projects that temperatures in the Middle East and North Africa will increase twice as fast as the global average. 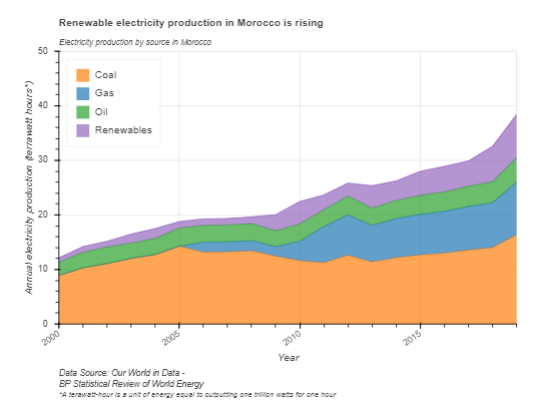 Greenpeace's Tazrouti says that the Global North needs to invest more in the countries of the Global South, including Morocco. "A lot of support is needed in southern countries and underdeveloped and poor countries that are suffering and are at the frontline of being affected by climate change," he says. Morocco was the eighth largest recipient of climate finance from richer countries in 2018 and 2019, receiving some $600m (£450m).

Countries that pollute the most are having a disastrous impact on the African continent, says Abdeladim El Hafi, who was Morocco's general commissioner during the United Nations climate conference held in Marrakesh in 2016 (COP22), and is now the high commissioner for water and forests. Many African countries do not themselves produce nearly as much carbon, but are already suffering the consequences of climate change.

"Plans and international financial help are needed to help vulnerable countries, islands, and poor countries," says Alaoui, citing water as a top environmental concern for the country. "In Morocco, we need policies to manage, recycle and reuse water. We need climate insurance for droughts and frequent fires, and we need sustainable and smart agriculture."

The World Resources Institute warned that Morocco's water resources were at high stress, as most of it is used for domestic agriculture and for its industries. By the end of the century, rainfall may decline by 20 to 30%.

Morocco's water shortage is hitting hard as water harvesting remains a major issue in this agriculture-intensive country, giving way to discontent and despair. In recent years, in places like the town of Zagora in southern Morocco, residents have been protesting about water shortages. 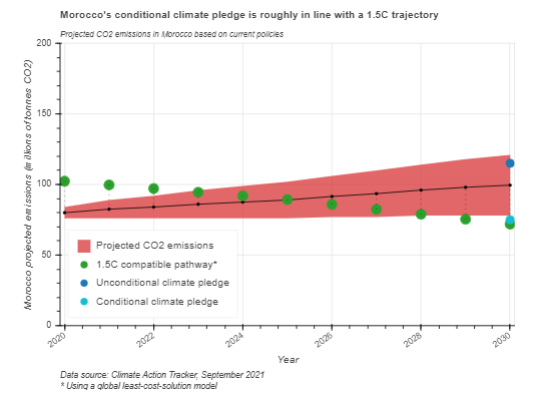 Broadly, there is a need for environmental reforms and actions that also take into account the country's rich biodiversity, says El Hafi. Initiatives also need to account for local contexts and needs, he says, adding that decades-long efforts have paved the way for a more solid plan.

"Policies around water [scarcity] in Morocco since the 1960s have been quite visionary," he says. For example, the decision to build a host of large dams allowed Morocco to go through periods of droughts without food shortages, he says.

Tangier-based environmentalist Hajar Khamlichi also believes adapting to climate change and solving the water issue is possible. Some Moroccan programmes are encouraging steps in the right direction, she says, including the use of sewage treatment plants to treat water for irrigation, the building of new dams and the desalination of seawater powered by renewable energy. "There are still policies in place and a vision," she says.

Khamlichi, the president and co-founder of the Mediterranean Youth Climate Network, which brings together different organisations of young people from Mediterranean countries, believes that mounting climate challenges in Morocco must be met head-on. "There is a lot of work to do and the challenges are great," she says. "As time goes, we notice more problems, but we are also coming up with solutions."

Rachid Ennassiri, a Moroccan environmentalist, founded the Moroccan Youth Center for Sustainable Energy in 2018. This national organisation counts among its members people from the region of Ouarzazate in the south, where many of the mega-projects, including the Noor plant, are located. Over the years, Ennassiri has worked on several climate change initiatives, including a project that aimed to make mosques more sustainable by using solar panels.

Morocco cannot simply continue to follow its initial plan for expanding renewables, Ennassiri says. "2021 is not 2009," he says, referring to the date of Morocco's first plan to cut carbon emissions and curb the reliance on fossil fuels. "In order to increase renewables, major reforms must be made."

Three-member consortium to develop a Hybrid Solar Project in Morocco.