How a hi-tech search for Genghis Khan is helping polar bears. 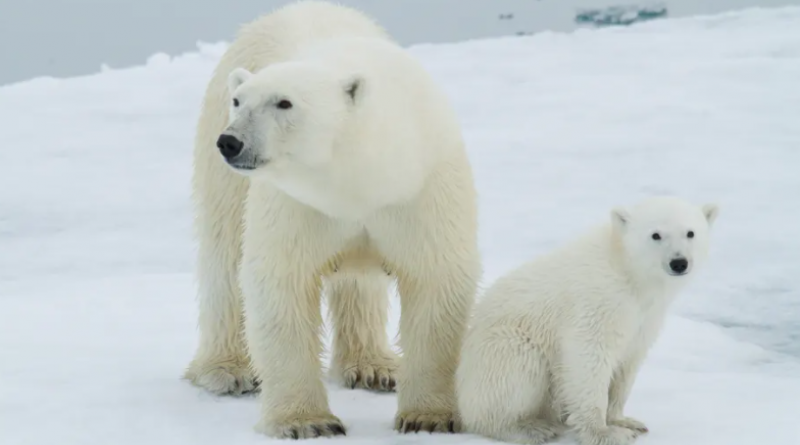 Researchers are going on a bear hunt, using AI and radar to spot dens and track the threatened Arctic predators

The age of extinction is supported by

Genghis Khan got his dying wish: despite attempts by archaeologists and scientists to find the Mongolian ruler’s final resting place, the location remains a secret 800 years after his death. The search for his tomb, though, has inspired an innovative project that could help protect polar bears.

“I randomly tuned into the radio one night and heard an expert talking about the use of synthetic aperture radar [SAR] to look for Genghis Khan’s tomb,” says Tom Smith, associate professor in plant and wildlife sciences at Brigham Young University (BYU) in Utah. “They were using SAR to penetrate layers of forest canopy in upper Mongolia, looking for the ruins of a burial structure.”

Successful pilot tests using SAR to find simulated polar bear dens took place in Alaska’s Prudhoe Bay in 2014 and 2015. The project was resurrected with trials in March 2021 on a snowy mountain plateau in Utah’s Manti-La Sal national forest. A SAR device was fitted to a Cessna O-2A Skymaster that flew 3,000ft (900 metres) over PBI researchers and BYU students digging dens a metre under the snow. With a lack of polar bears in Utah, students crawled inside to act as targets, or laid out simulated bears made from cardboard and tinfoil.

Building dens is a critical period for polar bears. For months, vulnerable cubs rely on their mother’s milk and the safety of the den to survive. As polar bears are driven further inland by receding sea ice, denning areas and oil and gas activity increasingly overlap. Disturbances can push fearful mothers to abandon their dens. The chances of survival for the weak and undeveloped cubs prematurely out on the snow and ice, are drastically reduced.

With fewer than 26,000 polar bears thought to be left globally and an estimated decline of 40% in some populations, such as the southern Beaufort Sea, every den and bear counts.

Getting reliable data on denning sites is vital. “The Arctic national wildlife refuge is the perfect example,” says BJ Kirschhoffer, PBI’s director of field operations, who led the latest tests in Utah. “Industry wants to go in and pump oil. If we have a tool that definitively says exactly where polar bear dens are, that means keeping people away from those places. If we want bears, we need baby bears, so we’ve got to protect those dens.”

SAR detects objects by sending pulses of radio waves; sensors pick up the echo or “bounce” to map an area. The aim is to find the right frequency, a sweet spot, that can penetrate snow but still detect a bear.

The current technology for detecting dens, forward-looking infrared (FLIR), which detects heat, is less than 50% effective. Smith likens it to a “divining rod”.

Talking to engineers, including BYU’s Dr David Long, Smith learned that SAR is used by the military to detect enemy camps, tanks and vehicles hidden beneath camouflage and is being studied as a potential tool for finding avalanche survivors. He and the team at Polar Bears International (PBI) had been looking for a technology to detect polar bear dens. “It was very serendipitous that I heard that broadcast,” says Smith.

SAR gives a wider sweep and radar data provides specific locations, rather than just an image. It works in adverse conditions, whereas wind, snow, ice and fog can render FLIR useless. “We’d spend days out on the tundra at 40 degrees below zero, looking where FLIR said there was a den and there was nothing,” Smith says. “We had a very personal stake in finding better technology.”

Recent SAR tests look promising – the radar could see the students and simulated bears. Next, the technology is likely to be tested on real polar bear dens in Canada or Norway.

There are also hopes it could soon be possible to do polar bear surveys from satellites in space. “A satellite going over the Arctic, giving an idea of polar bear numbers and movements, would be transformative,” says Geoff York, PBI’s senior director of conservation. “Radar engineers we work with at BYU say the technology exists. In the next decade, we could see that shift. It would be a massive gamechanger.”

Other projects to monitor polar bear movements across the Arctic include “burr on fur” temporary tracking devices. PBI has worked with 3M, the company behind Post-it notes, to develop small bioplastic triangles with coiled bristles that stick to a polar bear’s fur, like a burr, along with a medical-grade adhesive. Burrs are smaller and easier to attach than collars, and less invasive than ear tags or implants, which require surgery. They can cope with extreme cold, snow, ice, saltwater and a polar bear’s rough lifestyle. By the time the polar bear moults and the tag comes off with its hair, the data has already been collected via satellite.

Tags were applied to five wild bears in western Hudson Bay, in Canada’s Manitoba province in November 2020, with plans to tag more, possibly in Greenland and Nunavut, northern Canada, when Covid restrictions allow. “Being able to monitor polar bears matters a lot,” says York. “Historically, we only have movement data from female polar bears, as radio collars slip off adult males’ thicker necks. We don’t know how adult males or sub-adults use habitats. As sea ice changes in the Arctic, we need a better understanding of what’s using which habitat, so we can model the potential impacts.”

Technology to understand what goes on inside dens has also improved from the days of researchers sitting out on the ice to watch the bears. PBI uses remote-controlled cameras fixed outside dens and is working with an artificial-intelligence specialist at San Diego zoo to produce cameras that can detect targets and follow their movement. “To argue that someone’s disturbed a polar bear den, you need to know what normal denning behaviour is,” says Kirschhoffer. “The more we know, the more we can protect polar bears.”

The SpotterRF compact surveillance radar system is used by the US military to warn of enemy intruders, drones and vehicles. “It’s highly mobile and detects everything around you at 360 degrees,” says York. “If there’s any movement, it tells you where it is and tracks it. Anything we can do to keep polar bears and people safe is a good move. The tech’s great because it’s 24/7 and sees through darkness, snow and fog.”

The early-warning radar system is ready to be used to monitor polar bears, with Norway’s Svalbard archipelago or Churchill likely options. It sends an alert to a person, so they could issue a warning. But there are also plans to use the radar to trigger a deterrent, such as strobe lighting or a noise, to steer bears away.

The system’s most interesting innovation is artificial intelligence. “We’ve focused on training radar detection’s AI,” says York. “From all these things we’re detecting, what’s a person? What’s a tundra buggy? What’s grass blowing? What’s a polar bear? It’s not using imagery. It’s using quantitative data from the radar to determine what’s what. Over the season, we had 130 polar bear targets and it got us accuracies in the high 90-percentile range.”

AI’s potential is exciting conservationists. “With tech, we’re able to gather massive amounts of information, but how do we find the data we want? How do you filter it to make sure it doesn’t care about snowmobiles, but you see the one polar bear that walks across the screen?” says Kirschhoffer. “AI’s the key to all that stuff, for radar, SAR and cameras. AI can give us more ‘intelligent’ data.”

These are desperate measures for desperate times. “If we were doing our jobs collectively and caring for our planet, there wouldn’t need to be all these hi-tech solutions,” admits York.

Two-thirds of the world’s polar bears could be lost by the end of the century. Disappearing sea ice, caused by the climate crisis, is their greatest threat. “All the tech tools we’re using are stopgaps to help protect the animals we have,” says Kirschhoffer.

“But ultimately the solution isn’t any of this tech; it’s getting people to change their behaviour, to live more sustainably and reduce their carbon footprint, and maybe pushing tech to find more efficient ways to live on this planet. That’s the tech we need most: carbon capture, more efficiencies, electric cars, whatever reduces our impact on the planet.”

Whether we will be able to change our behaviour and how much we will rely on tech solutions to help tackle the climate crisis is hard to predict. “Covid’s been an interesting example,” says Kirschhoffer. “Who would’ve thought you can crank out a vaccine in a year to solve Covid? I have great faith we can solve the climate problem. We just need to buckle down and make it happen.”

Most polar bears to disappear by 2100, study predicts.

Arctic ice loss forces polar bears to use four times as much energy to survive – study.