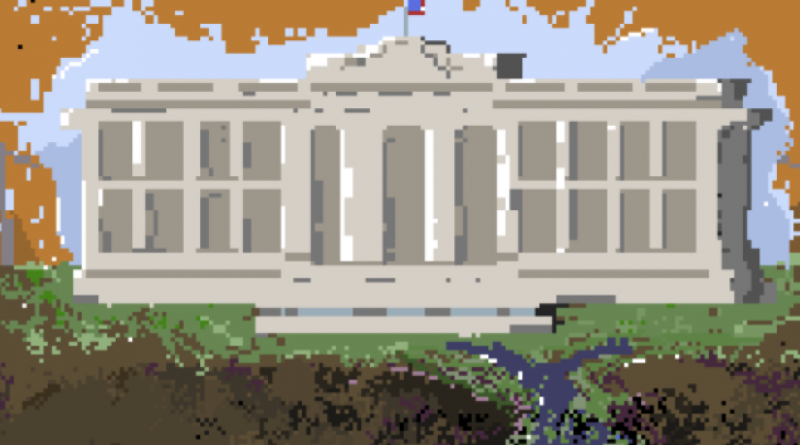 The new president is focusing on seven key areas to reverse a legacy of environmental destruction and climate denialism.

Faced with an unfolding climate crisis that is fueling more powerful storms, enormous wildfires and scorching heatwaves in the US, Donald Trump unapologetically set about dismantling policies to cut planet-heating emissions, mocked or ignored climate science, and threw open vast tracts of American land and water to fossil fuel development.

The systematic reversals in environmental protections pose a challenge to Joe Biden, Trump’s successor as US president, who has called climate change the “existential threat of our time”. Biden has set about the task of undoing Trump’s legacy with hyperactive zeal, through a flurry of executive actions. In all, about 100 Trump-era environmental policies are being targeted, although some may take several years to reverse. Here’s how Biden is doing it.

1) Protecting endangered animals and their habitats

What Trump did In an attempt to offer up more area for oil and gas drilling, which the industry said would be a boon for jobs, the Trump administration weakened key interpretations of the Endangered Species Act, making it harder to protect endangered species and their habitats. Rules banning the killing of migratory birds were loosened, companies were allowed to “incidentally” kill animals as they went about drilling, and creatures suffering large population declines, such as the monarch butterfly, were denied endangered species listing.

What Biden is doing Biden is reviewing, and will probably reverse, Trump’s wildlife rollbacks, such as those involving the protection of migratory birds and the application of endangered species rules. Other planned reforms should aid species facing what scientists say is the Earth’s sixth mass extinction event, such as clean water rules that safeguard streams and wetlands, environmental reviews of potentially destructive projects and the halting of fossil fuel development in places such as the Arctic national wildlife refuge, a vital, pristine wilderness for birds, caribou and other creatures. 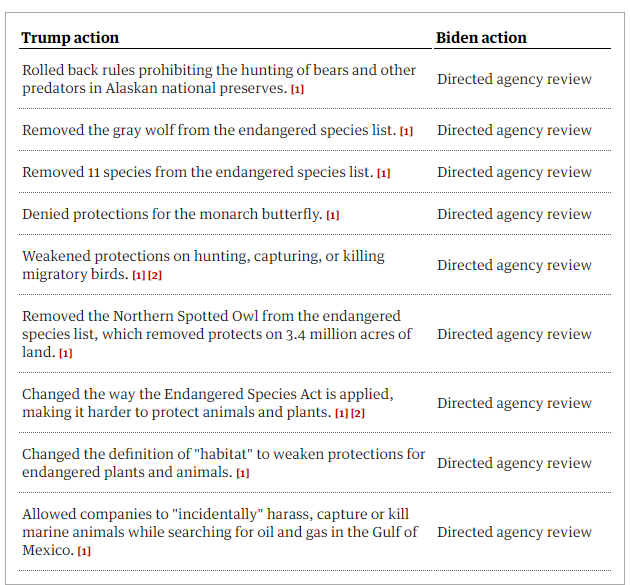 2) Protecting land that was opened up to drilling

What Trump did Trump immediately approved the Keystone XL pipeline and the Dakota Access pipeline, two contentious projects moving vast amounts of oil that were cheered by industry but enraged various farming, climate and Native American groups. The former president opened up almost all of the federally managed land and ocean for oil and gas drilling including, for the first time, Arctic waters. He also shrank two national monuments in Utah – Bears Ears and Grand Staircase-Escalante.

What Biden can do Biden has halted oil and gas leasing on public lands, opening up a pathway for a total ban, and is set to reverse the shrinking of the protected national monuments. The new administration has set a goal of protecting 30% of America’s land and oceans by 2030 and has a plan to create a “civilian climate corps” that would work to restore degraded landscapes and waterways. The Keystone pipeline has been blocked, with other similar projects now looking highly uncertain.

What Trump did Under Trump, the US stalled or weakened various measures aimed at curbing greenhouse gas emissions and direct air pollutants that cause various respiratory and heart conditions. Pollution standards for cars and trucks were scaled back and California was barred from enacting tougher rules. Also axed were rules to reduce leaks of methane, a potent warming gas, and standards to limit pollution from airplanes and refrigeration. The clean power plan, the linchpin Barack Obama-era plan to reduce carbon emissions from power plants, was scrapped and replaced with a weaker alternative.

What Biden can do Biden is working, in concert with car manufacturers, on a new, higher standard of fuel efficiency for vehicles. He has ordered his administration to help accelerate the rollout of clean energy such as solar and wind to shift the US away from polluting sources such as coal and gas that contribute to climate change and poor air quality. The methane standards will be reinstated and a particular focus will be placed upon communities, typically people of color, who have suffered poor health from living next to pollution sources such as highways and industrial facilities.

4) Regulating toxic chemicals according to the science

What Trump did In a flurry of deregulatory actions, the Trump administration loosened rules on storing petroleum products, weakened standards around lead in paints, fast-tracked toxic flame retardants and declined to restrict or ban a host of chemicals, from crop pesticides to paint strippers, that scientists have warned pose a threat to human health.

What Biden can do Biden’s Environmental Protection Agency has been ordered to review how the Toxic Substances Control Act is used to protect people from harmful substances. There will also be a review of the fast-tracking of chemicals in the Trump era, as well as the decision to not ban other harmful substances. The president has said he wants to aid communities such as those found in Louisiana’s “cancer alley” that have been blighted by nearby chemical facilities.

What Trump did The federal government’s role in protecting the nation’s waterways has been a contested issue for some time and the Trump administration decided to settle upon a very narrow definition that meant it would not oversee pollution that occurred in various wetlands and temporary streams. There was also a tepid response, advocates say, to protecting Americans’ drinking water supply in the wake of the Flint water crisis.

What Biden can do Biden has committed to regulating PFAS chemicals, known as “forever chemicals” found in the drinking water of almost all Americans, as well as reviewing the application of the clean water act.

What Trump did Businesses or individuals that carelessly pollute the environment risk being prosecuted by the federal government but enforcement of such rules dropped off dramatically during the Trump years. Environmental reviews for major projects were weakened, enforcement of air pollution rules was relaxed and agencies were restricted from setting new environmental rules.

What Biden can do The new administration has signaled it will aggressively pursue polluters, particularly those operating in communities that have long been overlooked. Biden himself has backed the idea of fossil fuel companies being sued for damages for the pollution and climate change they have caused.

What Trump did The Trump administration removed a large burden of rules from companies, even if they seemingly had little impact other than to harm the environment. Clothes washing machines and lightbulbs were allowed to be less efficient and environmentally friendly, coal plants were allowed to more easily dump their waste into waterways and the air and offshore drilling regulations, implemented after the Deepwater Horizon disaster in the Gulf of Mexico, were repealed.

What Biden can do Most of the regulations jettisoned by Trump are being reviewed by Biden’s administration and will likely be reinstated, although court challenges will probably slow the process.

Noa Yachot and Rashida Kamal contributed to this piece