The Household Product Cleaning Up More Than Just Your Countertops. 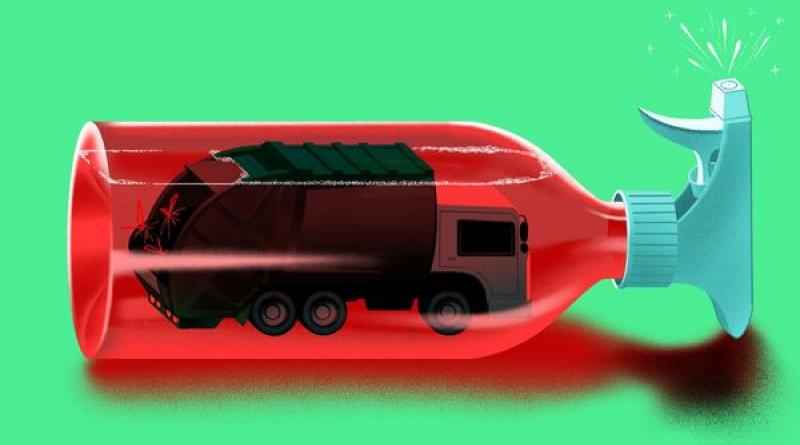 Veles is a spray cleanser made from organic waste—the first in what founder Amanda Weeks hopes will be a whole trash-based product line.

There’s a pervasive bit of mythology about food waste that it’ll just turn into compost, even in a landfill. It’s not true, but Amanda Weeks is used to the rumor. “Through some kind of magical thinking, people feel that their garbage is breaking down or getting recycled,” she says, “and then they’re not thinking about it more beyond that.”

Weeks is thinking about it. As the founder of a company reimagining the afterlife of stale bread and tossed-out produce, she turns garbage into something you can buy—specifically, into an unusually attractive bottle of household cleaning spray. Veles launched earlier this year as the inaugural product from Ambrosia, the company Weeks founded in New York in 2014 with the mission of diverting and repurposing food waste from landfills.

Billed as “the first closed-loop cleaner,” Veles is made from the water, acetic acid, lactic acid, and alcohol found in post-consumer organic waste. (Weeks gets asked a lot, and no, the spray doesn’t smell like a trash can—it’s scented with lavender, bergamot, and mint essential oils.) A dish detergent and farming fertilizer will follow; eventually, Weeks wants to make base ingredients for skincare products. Already, the company has been acquired by waste consulting company Recycle Track Systems.

Ambrosia’s seemingly discordant lineup is determined by what can be done with its raw materials, i.e. garbage. The company gets paid to take organic refuse from waste management companies—many of which, in accordance with New York’s food waste diversion mandates, haul trash from businesses to recycling outlets. Then, at a lab in New Jersey, chemical engineers and biologists extract acids, alcohols, nutrients, fats, and oils, and whatever else useful they can find. Once you break down the ingredients, Weeks says, “you can start to see how those different components map out to different industries.”

Weeks won’t elaborate further on what happens in the lab, saying the technology is proprietary and the competition in food waste tech is growing. To her latter point: According to ReFED, a non-profit that tracks food waste, ventures in the category have attracted more than $1 billion in investment in 2020. For 2019, that number was $800 million.

Each year, Americans send an estimated 52 million tons of organic matter to landfills, where it eats up open land and releases methane, a greenhouse gas that traps 25 times more heat than carbon dioxide over the course of a century. A problem this enormous creates ample business opportunities, and a swarm of food waste startups has emerged in recent years in response.

“In the waste hierarchy, the best thing you can do is prevent it,” says Julie Raskin, executive director of the Sanitation Foundation, which works with the New York City Department of Sanitation on initiatives to reduce the amount of stuff that gets thrown away. “The second rung on the ladder is recovery, turning food into other food,” Raskin says. “Then further down, you get to recycling food waste into other products.”

Most waste startups focus on prevention. Apeel Sciences, for one, focuses on extending the shelf life of produce. Another, Leanpath, is a data analytics platform for tracking waste.

Of the startups turning old food into new food, some, like Misfits Market, sell misshapen but edible produce. Others take food waste and turn it into beer, broth, or many kinds of chips. “Big food manufacturers aren’t taking full advantage of what they could be doing, extracting the full value of the crops being grown,” says Kaitlin Mogentale, founder of Pulp Pantry, which takes discarded fruit and vegetable pulp from juicing companies and reinvents it as salt and vinegar or jalapeño lime chips. “We’re figuring out how to create pathways for turning what was once considered waste into a new revenue source for food manufacturers, and a new ingredient for nutritional food.”

One bag of Pulp Pantry chips or bottle of Veles might not eliminate as much waste as a food-tracking app, says Alexandria Coari, ReFED’s director of capital and innovation, but shoppers can see it and interact with it, potentially influencing their future behavior. “It tells a story” about the need to reduce consumption, she says.

Weeks, 36, is not a lifelong activist. A Staten Island native, she spent the beginning of her career in a marketing desk job. The ennui of life at a big, rigid company eventually set in. “I just felt like what I was doing didn’t matter,” she says. Faced with the prospect of staying, as Weeks puts it, “trapped in a mediocre life,” she decided to research her way out of it. Intent on doing some good in the world, Weeks embarked on an open-ended self-immersion in environmental policy.

If any single moment evangelized Weeks, it was the Teflon case. For years, DuPont Co. allegedly knew that a chemical in Teflon could lead to birth defects and cancer and didn’t tell its consumers. (DuPont and spinoff Chemours Co. agreed to pay more than $670 million in 2017 to settle thousands of personal injury claims, but denied wrongdoing.) The themes of the case—corporate responsibility, environmental stewardship, public health—made Weeks reexamine her childhood, particularly the trust she’d once placed in corporations. “I was born in the ‘80s, and I grew up very divorced from food. I never thought about where it came from,” she says. Not every company is a DuPont, leaching poisonous chemicals. But what about harmful food additives and packaging that piles up in landfills? “We’ve been living with this type of capitalism, with companies who know the thing they’re producing is dangerous for so long,” Weeks says.

This was 2013, and New York City had just enacted a food scrap recycling law. Weeks spotted a gap in the plan. “The law was designed to create a market for food waste diversion, but there weren’t a lot of solutions yet,” she says. “I think there was a large compost facility in Delaware that we were expected to send all our food to.” If she set up a company in New York, waste haulers wouldn’t have to cross multiple state lines. She launched Ambrosia in 2014, and in 2016 left her full time job for good.

Food waste startups may be attracting capital now, but even just a few years ago, Weeks says, that wasn’t the case. “I’d go to pitch investors about this huge industry with this huge expensive problem in this huge market, and I had to spend an hour explaining to people how the waste industry works,” she says.

Squaring environmentalism with venture capital still requires its own set of semantics, according to Coari. “A lot of innovators and investors don’t talk about minimizing food waste, they talk about solving business inefficiency, improving operational processes, reducing cost,” she says.

The dialogue is different with consumers. When Ambrosia starts selling fertilizer products, Weeks expects to cater to midsize farmers who prioritize organic methods, but Veles is geared more towards someone who cares equally about waste and design. Weeks is fastidious about using it as an object lesson. It’s packaged in an aluminum bottle (making it infinitely recyclable) that consumers keep and refill with cheaper, bulk containers of the solution. One bottle costs $20—about four times the price of any standard cleaner that comes in a plastic bottle. By charging more, Weeks makes you wonder why others can sell for so cheap.

The lesson seems to have traction. Veles frequently sells out (at the time of writing this article, there’s a waitlist) and has garnered enough vocal fandom for Weeks to know that her consumers want a Veles dish detergent next. Beyond that? Weeks will follow the science and her ethos. “We’ll see what we discover.”

Time to get serious about food waste in fight against global heating.