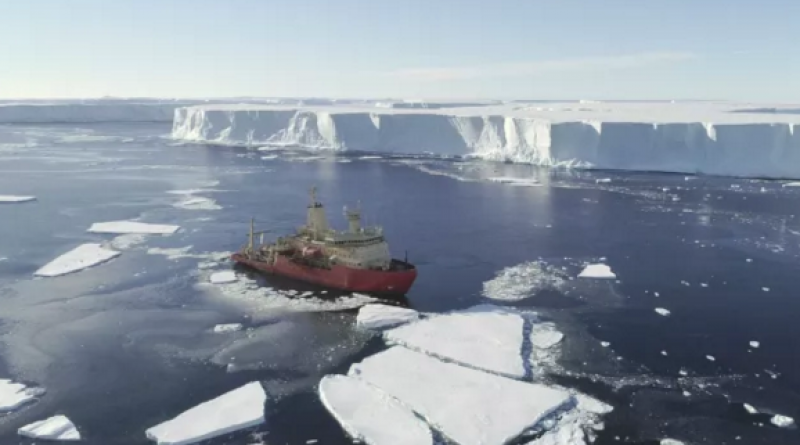 Sea levels could rise more than two feet if just this one glacier collapses.

One of the largest, most unstable glaciers in Antarctica is sliding into the ocean. That's due, in large part, to hidden rivers of warm water that lubricate its underbelly, more so now than ever in the era of climate change. Now, researchers know what those unseen channels look like.

By using equipment that can measure fluctuations in gravity, radar and seismic waves, scientists were able to map precisely where these glacier-melting channels cut through the deep seabed.

"It was fantastic to be able to map the channels and cavity system hidden beneath the ice shelf; they are deeper than expected — some are more than 800 meters [2,600 feet] deep," study lead researcher Tom Jordan, an aero-geophysicist at the British Antarctic Survey, said in a statement. "They form the critical link between the ocean and the glacier."

Thwaites Glacier is a vast brick of ice flowing into Pine Island Bay in western Antarctica. If you took off in an airplane from El Paso, Texas and flew due south — across about 590 miles (950 kilometers) of western Mexico and 5,700 miles (9,200 km) of Pacific Ocean — you'd see it out your window as a white expanse with sheer cliffs where it meets open water.

Thwaites has moved toward the ocean its entire existence, but that rate of motion has increased fivefold over the last 30 years, to the point where snowfall at the rear of the glacier can no longer replenish ice lost in the front. That lost ice has contributed to about 4% of global sea level rise over those three decades. If the entire glacier were to collapse into the ocean, sea levels would increase by about a whopping 25 inches (65 centimeters). This dramatic increase would devastate current coastlines, so scientists are trying to understand the dynamics driving Thwaites' seaward motion and how fast these processes are accelerating the melt.

This new research, published Sept. 9 as a pair of papers in the journal Cryosphere, combined several under-glacier detection techniques to build detailed maps of those hidden channels. A key method: directly detecting gravity from the seafloor.

The action happens where the seabed, water and ice at the bottom of the glacier meet. Ice is less dense, and therefore lighter, than water and this difference in mass causes gravity to fluctuate from one part of the glacier to the next. Sensitive instruments on boats or airplanes flying overhead can pick up those fluctuations — revealing details hidden deep below the ice surface.

By combining that gravity data with radar and seismic measurements taken on the ice's surface, scientists have created the most complete description yet of that hidden world, where warm water slicks the glacier bottom — its "bathymetry," in scientific-speak.

"Our results confirm a major marine channel more than 800 meters deep extends tens of kilometers to the front of Thwaites Glacier," they wrote in the study, "while the adjacent ice shelves are underlain by more complex bathymetry."

One key revelation: The bottoms of younger ice conform tightly to the jagged seafloor, while older ice shelves (right now, blocks of ice older than 1993) tend to have flatter bottoms. Details like that will help scientists refine models of how ice moves over ocean floors.

"This research has filled a critical data gap," Kelly Hogan, a British Antarctic Survey marine geophysicist and lead author of one of the papers, said in the statement. "Together, the new coastal sea floor maps and the cavity maps track the deep channels for over 100 km [60 miles] to where the glacier sits on the bed. For the first time, we have a clear view of the pathways along which warm water can reach the underside of the glacier, causing it to melt and contribute to global sea-level rise."