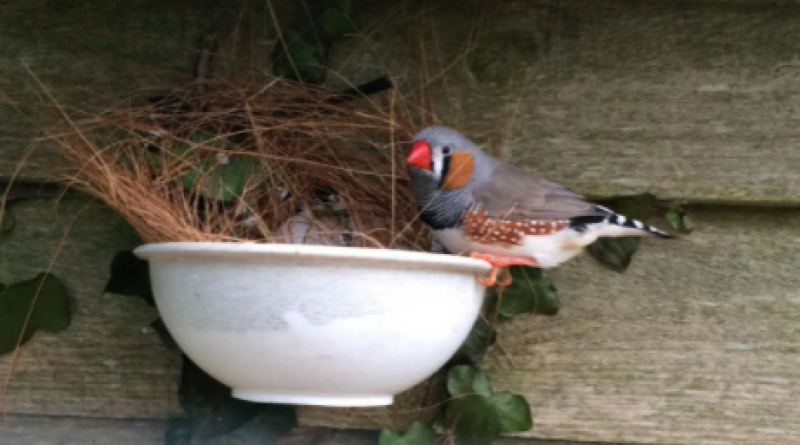 Some birds have mastered living in the scorching, dry environment of a desert. But even desert-adapted birds can't handle extreme temperatures like those seen during heat waves.

A heat wave is said to occur when unusually high temperatures prevail for several days in a region. During one heat wave that lasted eight days, all of the eggs that zebra finches had laid or incubated failed.

Native to Australia, zebra finches are flexible with their breeding. They can nest pretty much any time in a year. In February 2017, the birds were nesting during peak Australian summer when the heat wave hit. Maximum air temperatures were above 40°C (104°F) on all eight days.

Ideal incubation temperatures for the zebra finch are 36–38°C. "The temperatures that killed these embryos, they are obviously just too much for the embryos to take," Simon Griffith of Macquarie University in Australia told EcoWatch.

That summer, as part of a larger study, Griffith and his co-worker visited hundreds of nestboxes to check on their status. A handful of these had been occupied. Using a digital egg monitor, the scientists tested from time to time if the embryos in the active nests had a heartbeat. "Before the heat wave we could still see the heartbeat and then after these two or three days of heat when we checked the eggs, the heartbeat had stopped," Griffith said.

Out of 25 egg clutches, 23 had failed to hatch. Just two eggs out of the 100 hatched. Both the chicks died later. "The fact that they lost these eggs wasn't a big problem for the zebra finch but we think it's a bit of a warning," said Griffith. The zebra finch is well-adapted to heat and if it is losing its eggs, Griffith said, "it probably means there are lots of other birds that we weren't studying that also may have lost their eggs."

Being a common bird that can breed every few weeks, the setback did not hugely impact the zebra finch. But other, rare birds may not be so lucky, especially as heat waves become more frequent, extreme and prolonged.

"Widespread heat-related mortality of eggs, similar to that documented here, should be of particular concern for threatened species," said Andrew McKechnie of the South African National Biodiversity Institute. Threatened species with low breeding rates are even more concerning, according to McKechnie who was not involved with the work.

In South Africa, McKechnie documented the death of more than a hundred birds and bats in a single, extremely hot day in late 2020. Most of the birds that died were songbirds. This was despite the fact that adult songbirds have the means to beat the heat.

The zebra finch, a songbird, pants with its beak open to cool down and stays in the shade by restricting feeding to early morning. If there is a source of water nearby, the bird will drink and splash in it. The problem is the eggs can't go anywhere, said Griffith whose work was published in the journal Ibis.

While parent birds may shade their nests from the sun, they may not be able to stop the eggs from overheating. Evidence for this comes from another study published this year. The study reports nest failures in the jacky winter, also a songbird, from a semi-arid part of South Australia. In December 2018, when a heat wave struck, seven egg clutches were in the incubation stage. All of them failed. A year later, another heat wave resulted not only in jacky winters abandoning their nests but in the death of some of the adults.

Climate science is suggesting that things will get worse and certain areas of Australia will become hotter and drier, said Griffith. A lot of birds, including the zebra finch, are right up at the limit of what they can cope with and probably can't adapt anymore, he warns.

Yet, Griffith believes that birds might be able to tolerate higher temperatures if water is available. "Where there will be problems is where there is no water," he said.

Richa is an independent science writer. She writes Birds & Words, a newsletter on all things birds at TinyLetter.com/RichaMalhotra.