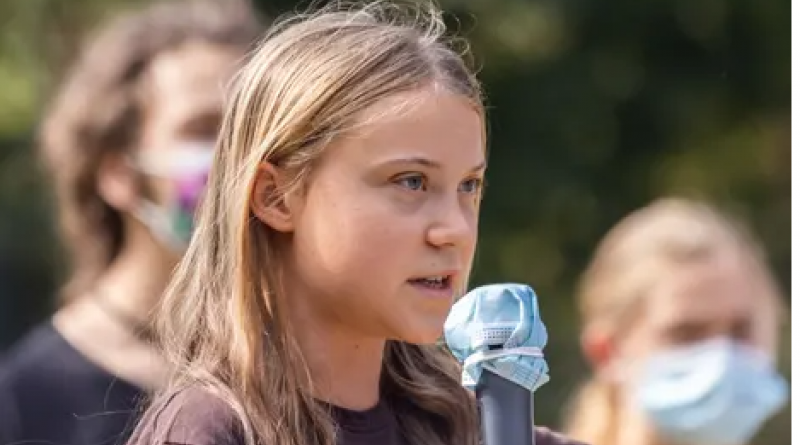 Activist says countries such as UK, US and China use ‘creative carbon accounting’ to augment green credentials

Greta Thunberg has accused countries including the UK of being in denial over the extent of the climate and ecological crisis and using “creative carbon accounting” to augment their green credentials.

In an opinion piece for the Guardian, the Swedish activist says world leaders have been responsible for several years of inaction in reducing emissions which she has termed “their decades of blah, blah, blah”.

Thunberg also accused the UK, the US and China of spinning emissions statistics to make it appear that their levels are lower.

She wrote: “Between 1990 and 2016, the UK lowered its territorial emissions by 41%. However, once you include the full scale of the UK emissions – such as consumption of imported goods, international aviation and shipping etc – the reduction is more like 15%.

“And this is excluding burning of biomass, like at Drax’s Selby plant – a heavily subsidised so-called “renewable” power plant that is, according to analysis, the UK’s biggest single emitter of CO2 and the third biggest in all of Europe. And yet the government still considers the UK to be a global climate leader.

“The UK is, of course, far from the only country relying on such creative carbon accounting. This is the norm.

“China, currently by far the world’s biggest emitter of CO2, is planning to build 43 new coal power plants on top of the 1,000 plants already in operation – while also claiming to be an ecological ‘trailblazer’ committed to leaving “a clean and beautiful world to future generations.”

The 18-year-old also believes “there are no climate leaders … at least not among high-income nations” due to a lack of public awareness and pressure from the media. Her comments come ahead of the UN Cop26 climate talks which the UK is hosting in Glasgow starting on 31 October.

Thunberg’s stance echoes remarks by the Queen who criticised world leaders’ inaction on addressing the climate crisis last week after acknowledging she is “irritated” by individuals who “talk but don’t do”. Other royals, such as Prince William and Prince Charles, have also recently weighed in on the climate breakdown.

It detailed plans to meet legal targets to cut emissions to net zero by 2050, but it was met with criticism for not providing enough policies or investment to drive the transformation needed.

The strategy said it would support 440,000 jobs in new sectors or for people moving from high-carbon industries to cleaner ones, along with unlocking £90bn in private investment in 2030 on the way to the mid-century goal.

Officials insisted the policies would deliver the carbon cuts needed to meet UK legal targets in the 2020s and 2030s and deliver on commitments to cut greenhouse gases by 68% by 2030 under the Paris climate accord.

However, the shadow business secretary, Ed Miliband, said: “The plan falls short on delivery, and while there is modest short-term investment, there is nothing like the commitment we believe is required.”

... we have a small favour to ask. Tens of millions have placed their trust in the Guardian’s high-impact journalism since we started publishing 200 years ago, turning to us in moments of crisis, uncertainty, solidarity and hope. More than 1.5 million readers, from 180 countries, have recently taken the step to support us financially – keeping us open to all, and fiercely independent.

With no shareholders or billionaire owner, we can set our own agenda and provide trustworthy journalism that’s free from commercial and political influence, offering a counterweight to the spread of misinformation. When it’s never mattered more, we can investigate and challenge without fear or favour.

Unlike many others, Guardian journalism is available for everyone to read, regardless of what they can afford to pay. We do this because we believe in information equality. Greater numbers of people can keep track of global events, understand their impact on people and communities, and become inspired to take meaningful action.

We aim to offer readers a comprehensive, international perspective on critical events shaping our world – from the Black Lives Matter movement, to the new American administration, Brexit, and the world's slow emergence from a global pandemic. We are committed to upholding our reputation for urgent, powerful reporting on the climate emergency, and made the decision to reject advertising from fossil fuel companies, divest from the oil and gas industries, and set a course to achieve net zero emissions by 2030.