Greenland ice sheet lost a record 1m tonnes of ice per minute in 2019. 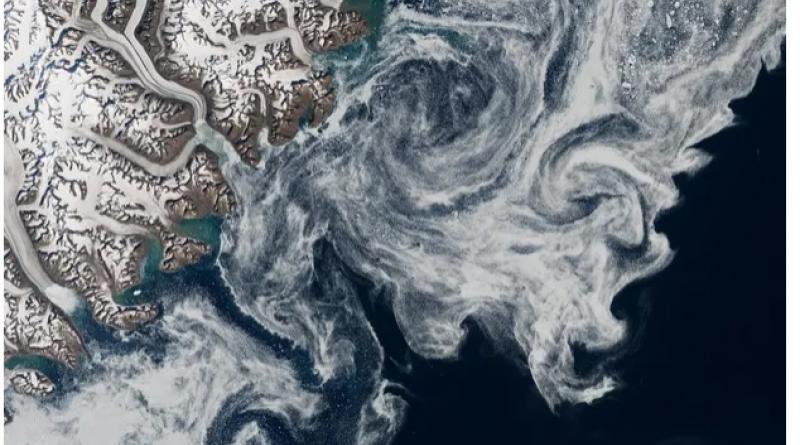 Climate-driven loss is likely to be the worst for centuries, and is pushing up sea levels

The Greenland ice sheet lost a record amount of ice in 2019, equivalent to a million tonnes per minute across the year, satellite data shows.

The climate crisis is heating the Arctic at double the rate in lower latitudes, and the ice cap is the biggest single contributor to sea level rise, which already imperils coasts around the world. The ice sheet shrank by 532bn tonnes last year as its surface melted and glaciers fell into the ocean and would have filled seven Olympic-sized swimming pools per second.

The satellite data has been collected since 2003. The 2019 loss was double the annual average since then of 255bn tonnes. Almost that amount was lost in July 2019 alone.

Scientists knew that ice loss from Greenland had been accelerating fast in recent decades and that there had been high rates of melting in 2019. But the satellite data accounts for new snowfall and allows the net loss to be calculated. The researchers said the scale of the 2019 loss was shocking and was likely to be the biggest in centuries or even millennia. 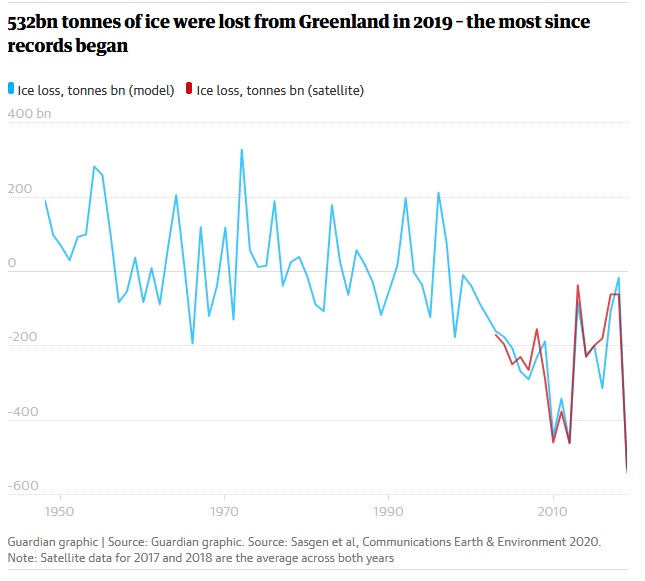 If the entire Greenland ice sheet melts, sea level would rise by six metres. But the researchers said it was not certain that the sheet had passed the point of no return and that cutting carbon emissions will slow the melting, which would take centuries to complete.

The scientists attributed the extreme ice loss in 2019 to “blocking patterns” of weather that kept warm air over Greenland for longer periods. These are becoming increasingly frequent as the world heats up. Almost 96% of the ice sheet underwent melting at some point in 2019, compared with an average of 64% between 1981 and 2010.

“[2019 was] really shocking and depressing in terms of the numbers,” said Ingo Sasgen, of the Alfred Wegener Institute in Bremerhaven, Germany, who led the analysis. “But it’s also not very surprising, because we had other strong melt years in 2010 and 2012, and I expect we will see more and more.”

Snowfall in Greenland was low in 2019, also due to the blocking pattern, meaning relatively little new ice was added. “The real message is that the ice sheet is strongly out of balance,” Sasgen said.

Weather data and computer models allow for losses to be calculated back to 1948. “If we look at the record melt years, the top five occurred in the last 10 years, and that is a concern. But we know what to do about it: reduce CO2 emissions.”

Sasgen said a further worry was feedback mechanisms that increase ice loss, including meltwater weakening the ice sheet and speeding its fall into the ocean. Hotter weather also melts the white snow on top of the sheet, revealing darker ice below, which absorbs more of the sun’s heat.

“These results come at a crucial time,” said Yara Mohajerani, of the University of California Irvine in the US, who was not part of the study team. “2019 broke the previous record of 2012 by 15%, itself an unmatched record over the past several centuries to millennia.”

He said the heating of the Arctic was likely to increase further in coming years. “So it is crucial to closely monitor the changes in [ice] mass of the sheet, and Sasgen and his colleagues have taken an important step in that direction.”

The research, published in the journal Communications Earth & Environment, used data from the Nasa’s Grace satellites, which take gravity measurements and in effect weigh the mass of ice in Greenland.

The first Grace satellite ended its data collection in June 2017, and its replacement began in May 2018. Data from the second satellite was used to determine how much had been lost in the intervening period.

The researchers found 2017 and 2018 had unusually low ice loss, owing to a reversal of the blocking pattern that resulted in cold, snowy conditions fixed over Greenland. But even in these conditions the sheet still lost ice, meaning cold years do not compensate for the hot ones as in the past.

“It really shows that we have entered a completely different state,” with a trend of increasing ice losses and more variability each year, Sasgen said. “Greenland has become bipolar in a way.”

Prof Stefan Rahmstorf, of the University of Potsdam in Germany, said the new analysis was convincing and showed the transition from the old to the new satellite had worked smoothly.

“Since meltwater is freshwater, it dilutes the salt content of the surrounding ocean, which contributes to slowing the Gulf stream system,” Rahmstorf said. “If we wanted to make the 500bn tonnes of freshwater added in 2019 as salty as ocean water, about 200,000 Panamax-class cargo ships full of salt would need to dump their load into the Atlantic.”

Despite the rapid melting, the Greenland ice sheet is not necessarily doomed to melt entirely. Firstly, as glaciers retreat they lose contact with warmer ocean waters and therefore melt less. Secondly, the melting of the sheet with warm air takes centuries, during which time the rise in global temperatures might be reversed.

“If we reduce CO2, we will reduce Arctic warming and we will therefore also reduce the sea level rise contribution from the Greenland ice sheet,” Sasgen said. “So even though it might eventually disappear in large part, it happens much slower, which would be better as it would allow more time for the 600 million people living near coasts to move away.”