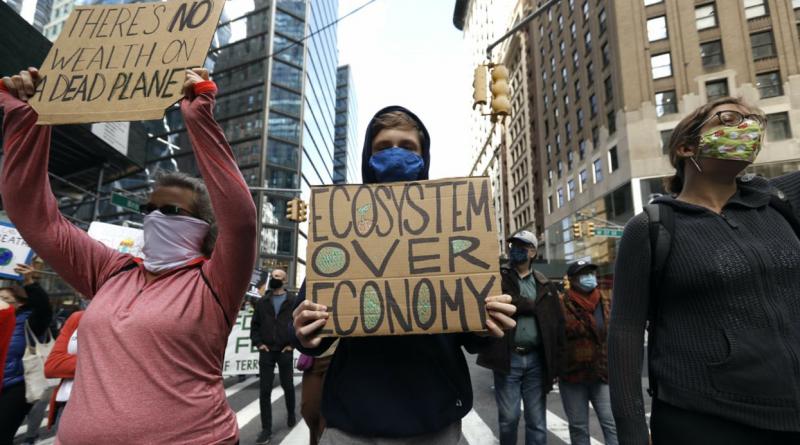 Amid the Global Week of Action for Debt Cancellation and one month ahead of the Finance in Common Summit, climate justice advocates on Monday urged public banks around the world to treat government responses to the coronavirus crisis as opportunities to coordinate just recoveries from the ongoing public health and economic calamities and to simultaneously facilitate just transitions from dirty to clean energy, thereby beginning to "build the world we want."

"The climate crisis requires us to stay under the limit of 1.5°C of global warming, and the only way we can do it is rapidly moving away from fossil fuel production and use," said Clémence Dubois, France team leader at 350.org. "We need public finance institutions to be the first movers of this transition."

350.org executive director May Boeve argued that the Covid-19 pandemic and ensuing surge in unemployment and material hardship revealed "just how broken our economic systems are," while also stressing that the current catastrophe holds lessons for how to go about "solving other pressing global challenges," particularly the intertwined problems of intensifying inequality and climate disasters.

Contrary to the demands of social and environmental justice advocates, government and financial responses to the pandemic and recession in many countries to date have continued to prop up the fossil fuel industry rather than prioritizing investments in renewable energy development.

As Common Dreams reported earlier this month, the Trump administration and U.S. Federal Reserve have bailed out Big Oil during this crisis, and a May report by Oil Change International and Friends of the Earth showed that since the Paris Agreement, G20 countries have provided at least $77 billion per year in financing for oil, gas, and coal projects through their public finance institutions.

According to 350.org, a handful of institutions, such as the European Investment Bank, Swedfund, and the French Development Agency, have already committed to diverting public money away from fossil fuels—a move that climate campaigners say is necessary but insufficient.

Ahead of the Finance in Common Summit being held in Paris from November 10-12, advocacy groups have described this first ever international gathering of public banks—where nearly 450 financial institutions controlling approximately $2 trillion in public money will convene—as an opportunity for all public financial institutions to commit to aligning their investment policies with carbon emissions reductions, biodiversity protection, and other sustainable development goals.

Activists argued that public banks' ambitious commitments in support of an internationally just transition away from fossil fuels and toward renewable energy can help harness resources in ways that disempower the oil, gas, and coal industries while creating a more egalitarian and sustainable world that benefits workers, communities, and the environment.

Dubois explained in a statement that "this leadership is increasingly important as governments prepare to deploy historic levels of public finance in response to Covid-19. Such a commitment needs to be concrete and tangible, and would help set a high bar for what climate leadership looks like for public finance institutions."

"Development banks have the power to enact policies and direct funds towards a just recovery," Dubois said. "Especially in the midst of a health and economic emergency, public money must be used to boost existing solutions that will create new jobs and support the people most impacted."

"Public financial institutions are accountable to the planet and the people," he added. "After all, it's our money, and what they are doing with it determines our lives and our future."

Climate justice advocates also pointed out that this week is the Global Week of Action for Debt Cancellation, an initiative promoted by many organizations and movements in various regions around the world to highlight the negative impacts of debt on countries throughout the Global South.

350.org and others argue that the coronavirus pandemic and resulting economic crisis have highlighted the long-term consequences of colonization and imperialism for the world's poorest inhabitants.

"When major financial institutions lend money to Global South governments to develop fossil fuel projects, they are not only destroying the climate, weakening democratic processes and laws, deepening poverty and inequality, and violating human rights," said Alex Lenferna, a climate justice campaigner at 350.org Africa, "but also tying up young and future generations in debt slavery."

According to Lenferna, "we cannot have climate justice and a just recovery without debt justice."

"Debt contracted to finance harmful fossil fuel projects that lead to climate chaos is completely illegitimate and should not be repaid," Lenferna added. "Public finance institutions should cancel these debts and not allow any new ones."

Bankrupt Fracking Companies Are Harming the Climate and Taxpayers.