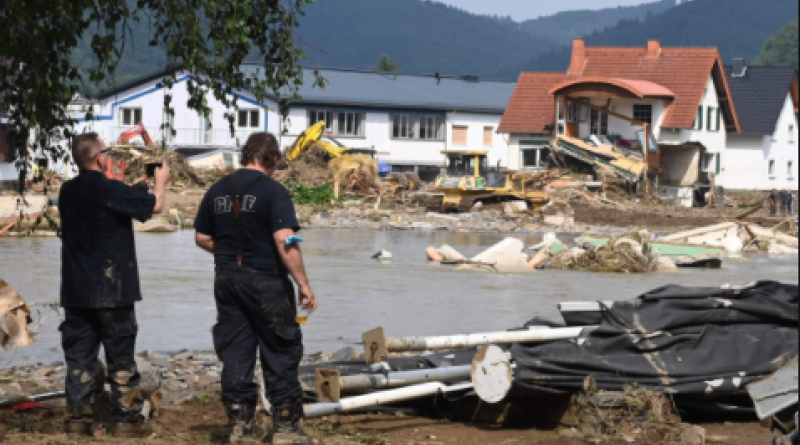 The death toll from the floods topped 180 on Sunday when some 157 people were confirmed dead in Germany and 31 died in Belgium.

The impact of floods in western Europe represents a “monumental failure” that “should have been avoided,” a scientist has said.

The death toll from the floods topped 180 on Sunday. Some 157 people were confirmed dead in Germany and 31 died in Belgium.

The floods spilled over to other parts of Europe including Austria and The Netherlands.

However, Professor Hannah Cloke OBE, Professor of Hydrology at the University of Reading, has said the destruction “should have been avoided” after forecasters issued alerts prior to the floods.

She said: “For so many people to die in floods in Europe in 2021 represents a monumental failure of the system.”

She added: “Forecasters could see this heavy rain coming and issued alerts early in the week, and yet the warnings were not taken seriously enough and preparations were inadequate.”

The alert is sent to the relevant national authorities in each nation, who should then alert the local authorities who can issue evacuation warnings. However, communication was not clear enough, Prof Cloke said.

She said: “The European Flood Awareness System, which is operated by the Copernicus Emergency Management Service, [was] set up specifically for these kind of events.

“I am glad that it has been able to accurately forecast events and pass information to authorities in good time, which has undoubtedly aided the difficult response.

“But every life lost, and to a lesser extent, every car seen floating down a street, is testament to a failure of action. Buildings cannot move, but people can, and things like cars can be put out of harm’s way.

“I believe more clear communication, not less, is likely to be part of the answer to improving the whole system of flood preparedness in the future, particularly in a world where climate change is making events more extreme.”

She added that, with the climate getting hotter, dangerous weather is to be expected.

“These kind of high-energy, sudden summer torrents of rain are exactly what we expect in our rapidly heating climate,” she said. “The fact that other parts of the northern hemisphere are currently suffering record-breaking heatwaves and fires should serve as a reminder of just much more dangerous our weather could become in an ever-warmer world.”

Climate scientists say the link between extreme weather and global warming is unmistakable and the urgency to do something about climate change undeniable.

Scientists can’t yet say for sure whether climate change caused the flooding, but they insist that it certainly exacerbates the extreme weather disasters on display around the world.