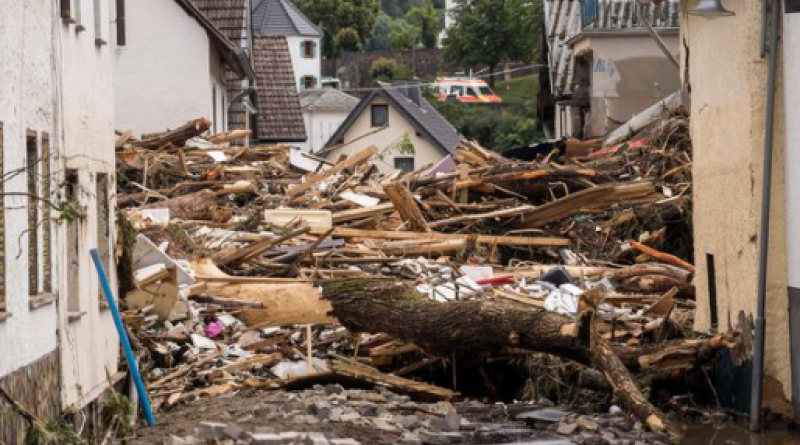 The death toll from the floods that devastated parts of western Germany rose to at least 103, with scores of people injured and many others unaccounted for after houses were swept away and roads and bridges were badly damaged.

Many rail lines and streets remained blocked and tens of thousands were without electricity Friday as rescue workers toiled in the worst-hit areas in the states of North Rhine-Westphalia -- which is run by conservative chancellor candidate Armin Laschet -- and Rhineland-Palatinate.

“Our region is experiencing a flooding catastrophe of historic proportions,” Laschet, who is the front-runner to succeed Angela Merkel after September’s election, said Friday at a news conference. Linking the flooding to global warming, he said Germany must speed up its effort to achieve climate neutrality.

While Germany was hardest hit and faces a massive clean-up and reconstruction effort, heavy rains Wednesday night and into Thursday also swamped parts of Luxembourg, the Netherlands and Belgium. RTBF TV reported at least 15 deaths in Belgium, where train and road networks have been badly disrupted in the southeast of the country.

Malu Dreyer the Social Democrat premier of Rhineland-Palatinate, echoed Laschet in warning that the disaster was more evidence of the impact of global warming.

“We have more than 50 deaths to mourn and still people who are missing,” Dreyer said in an interview with ZDF television, adding that police helicopters alone had rescued more than 300 stranded on Thursday. “The pain is acute in our region and we have never seen anything like this.”

Merkel interrupted her U.S. trip on Thursday to make a statement in which she pledged swift federal government assistance backed by “all the power of the state.” The chancellor took part in a Rhineland-Palatinate crisis video call Friday and is considering visiting the region soon, according to her spokesman Steffen Seibert.

Defense Minister Annegret Kramp-Karrenbauer said all of Germany’s armed forces not involved in missions abroad were focusing their resources on the recovery effort.

Many smaller, family-owned businesses in the area have been hit hard, but the effects on Germany’s main industrial areas have been limited so far.

BASF SE, the world’s largest chemical producer, has experienced some delays to receiving goods via barge and train, but these haven’t yet led to production outages.

RWE AG was forced to halt operations at the Tagebau Inden open-cast lignite mine and one worker is missing, while Aurubis AG declared a force majeure at one of its plants which produces copper-based strip and wire used in electronics and the auto industry.

The flooding is among the most severe in western Germany in decades. Residents climbed onto rooftops and into trees after houses were inundated or collapsed. Thousands of homes were without power and phone connections for hours.

While the floodwaters have receded in some parts, the situation remains tense amid warnings that a key dam is at risk of bursting. Emergency crews have evacuated thousands of people living below the Steinbach reservoir, as more heavy rains are forecast.

Weather conditions should normalize next week, which may provide some relief, national weather forecaster Deutscher Wetterdienst said Friday in its latest four-week forecast. But there could be more heavy rain in Germany from July 26 to early August, it said.

Hannah Cloke, a professor of hydrology at the University of Reading, said river levels are high for this time of year, and are expected to swell even further over the next few days.

“These kind of high-energy, sudden summer torrents of rain are exactly what we expect in our rapidly heating climate,” Cloke said.

“The fact that other parts of the northern hemisphere are currently suffering record-breaking heatwaves and fires should serve as a reminder of just how much more dangerous our weather could become in an ever-warmer world.”

The GDV insurers’ association said that the prevalence of storms, floods, heavy rain and hail in Germany this year could make it one of the most damaging since 2013.

While Luxembourg so far counted no injured or dead, the floods have had “dramatic consequences,” with at least 400 people having to be relocated, he said.

In Belgium, waters are still rising downstream as the Meuse river flows through to Flanders and the Netherlands, with Flemish broadcaster VRT saying the river is now nearly a mile wide in places where it usually spans just 165 feet (50 meters).

The southern province of Limburg was hit hardest in the Netherlands as thousands of people living there were forced to leave their homes and businesses closed.

Dutch Prime Minister Mark Rutte declared the flood-hit region a disaster area, which means that businesses and people living in the area can receive compensation for damages.

“Science tells us that with climate change we see more and more extreme weather phenomena that last longer,” European Commission President Ursula von der Leyen said at a press conference in Dublin Friday, when asked about the floods.

“It is the intensity and the length of these events where science tells us this a clear indication of climate change and that this is something where it really, really shows the urgency to act.”