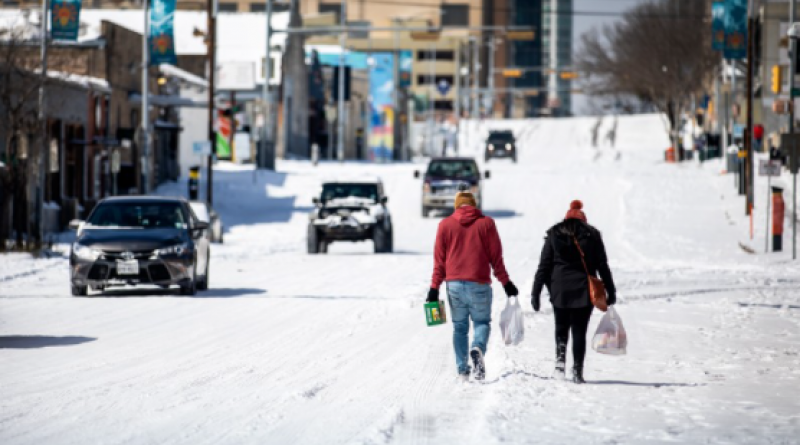 Recent spells of unusually cold winter weather in the United States and other parts of the Northern Hemisphere could be a paradoxical consequence of the climate warming in the Arctic, according to a study based on decades of atmospheric observations. However, it is still unclear whether this represents a long-term trend that will persist as the world heats up.

The Arctic’s rate of warming is twice that for Earth as a whole, and some climate researchers have long suspected that this rapid Arctic warming can trigger anomalies in the winds around the North Pole, with consequences for weather thousands of kilometres farther south.

“Conventional wisdom is that while global warming means more heatwaves, it will definitely lead to less cold spells and snowfall,” says Judah Cohen, a climate scientist at the Massachusetts Institute of Technology in Cambridge, and lead author of the study. “But that’s not quite true. There are mechanisms by which climate change can contribute to more severe winter weather too.”

One dominant feature of the winter atmosphere above the Arctic is the polar vortex, a fast-flowing band of high-altitude winds. The vortex normally isolates the atmosphere over the Arctic from warmer air closer to the Equator. But when the polar vortex stretches and undulates, as it sometimes does, chilly air can leak out to latitudes that would otherwise rarely experience cold snaps. Such extreme weather can prove fatal in regions unprepared for frosty conditions — in February, at least 111 people died in Texas when cold Arctic air hit the state and parts of northern Mexico.

In their study, published this week in Science1, Cohen and his colleagues compared 40 years of satellite observations of atmospheric conditions over the Arctic with experiments based on computational climate models. The models probed how a decline in Arctic sea ice and snow cover would affect airstreams in the region. Since ice and snow reflect a large fraction of incoming sunlight back into space, whereas the darker ocean and land surface absorb more radiation, this decline is known to drive Arctic warming.

The researchers found that episodes of polar-vortex stretching have markedly increased in the past few decades, and that their models reproduced this behaviour well when they included the effects of Arctic warming.

“This is an insightful new analysis,” says Dim Coumou, a climate scientist at the Free University Amsterdam in the Netherlands, who was not involved in the study. “Its strength is that they have very carefully looked at a specific pattern of the polar vortex that is important for cold spells in particular places, and backed up their observational analyses with climate-modelling experiments.”

But the idea that Arctic warming might be responsible for cold spells in mid-latitude regions is still hotly debated among climate scientists. At first glance, it might seem obvious that winters will generally tend to get milder in a warming world. But climate models that are commonly used to study complex links between the different components of the climate system diverge on the issue of how strongly Arctic warming might influence mid-latitude winters, and state-of-the-art models do not accurately replicate observed trends in the behaviour of the polar vortex. It remains to be seen whether the models are missing something, or whether the observations of polar-vortex stretching merely reflect natural climate variability, says Daniela Matei, a climate modeller at the Max Planck Institute of Meteorology in Hamburg, Germany, who was not involved in the study.

The new analysis does not settle these questions, Matei says. Although changes in sea ice and snow cover do seem to have a role in wind anomalies high up above the Arctic, other factors such as decadal variability in sea surface temperatures could also drive wintertime anomalies in the Arctic atmosphere that can lead to unexpectedly cold weather elsewhere, she says. To complicate matters further, there are still significant uncertainties about how Earth’s climate as a whole responds to snow and sea-ice changes.

For now, it remains unclear whether the recent examples of extreme winter cold are precedents for future weather. “Climate change isn’t linear,” Matei says. “What happens in one decade may not apply in the next one.”

How Global Warming Can Cause Europe's Harsh Winter Weather.