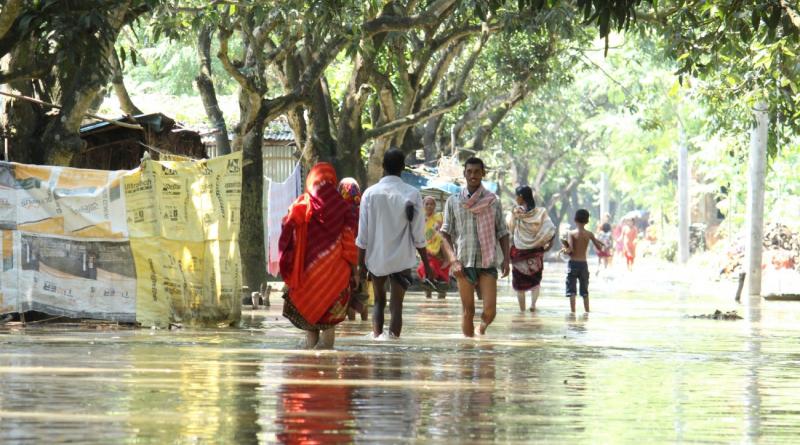 MADRID - The number of people at risk of being forced from their homes by river flooding could surge to as many as 50 million a year by the end of the century if governments do not step up action to tackle climate change, researchers warned on Tuesday.

That would be five times the average of 10 million displaced a year from the mid-1970s to 2005, and would happen as populations grow and as rainfall intensifies and ice melts on a warmer planet, causing more frequent and severe floods, said study author Justin Ginnetti.

About half the predicted increase would be caused by the effects of climate change and the rest by expanding populations, he noted.

The head of data and analysis for the Geneva-based Internal Displacement Monitoring Centre (IDMC) said the forecasts were only a partial picture but as flooding accounts for more than half of climate-related displacement, the outlook was “grim”.

The numbers pushed out of their homes by river floods could be kept to 20 million a year if governments stepped up efforts to keep a rise in temperatures to a globally agreed lower limit of 1.5 degrees Celsius above pre-industrial levels, he added.

But current plans put the world on track for warming of at least 3 degrees, scientists say.

“We expect even more extreme weather in the future, so it’s imperative that we understand the magnitude of future risk, what’s driving it, and what we can do about it.”

The IDMC will broaden its analysis to predict future displacement by storms soon, it said.

On Monday, aid agency Oxfam said wilder weather and fiercer wildfires drove more than 20 million people a year from their homes in the last decade, and the problem would worsen unless leaders act swiftly to head off surging climate threats.

IDMC’s Ginnetti said good practices to prevent people being displaced by floods include urban planning that does not allow homes to be built on river floodplains and more investment in setting up systems to evacuate people threatened by floods.

Some Asian countries, in particular India, Bangladesh and China, have developed the capability to move millions of people out of harm’s way ahead of storms - and such efforts need to be replicated in sub-Saharan Africa, Ginnetti told the Thomson Reuters Foundation.

And it is not just poorer states that will be hit by river floods, he added. For example, construction on floodplains is still occurring in the United States and other rich countries, in some cases subsidised by government money.

“Those are investments that are just going to waste and are resulting in displacement. That’s got to stop,” Ginnetti said on the sidelines of U.N. climate talks in Madrid.

Climate negotiators set up a body in 2013 to deal with growing “loss and damage” caused by climate change impacts, including people forced from their homes by weather disasters and slower changes such as creeping deserts and rising seas.

Work under the Warsaw International Mechanism for Loss and Damage (WIM) has resulted in more knowledge about climate displacement and help for governments to craft policies to avoid and respond to it, with the support of U.N. agencies.

But some developing states and climate activists say things are moving too slowly, leaving people now facing the reality of losing their land and homes without the support they need.

Idy Niang, who previously represented Senegal at the WIM, said when coastal villagers in his West African nation are forced to move inland by erosion and rising tides, they can no longer earn a living from fishing.

Meanwhile, livestock herders from Mauritania and Mali are moving across Senegal’s northern border to seek grazing as droughts bite, sparking tensions with Senegalese farmers and other residents, he added.

The government is working to understand the problem better and take migrants into account in its policies. It has also protected some coastal villages from encroaching seas, he told an event at the Madrid talks.

But many countries - and millions of people - have yet to be reached by the WIM’s efforts to tackle climate pressures forcing them to move, said Harjeet Singh, an expert on loss and damage with charity ActionAid International.

"We are already in a war-like situation... we need to work on a war-footing," he said. (Reporting by Megan Rowling @meganrowling; editing by Laurie Goering. Please credit the Thomson Reuters Foundation, the charitable arm of Thomson Reuters, that covers humanitarian news, climate change, women's and LGBT+ rights, human trafficking and property rights. Visit news.trust.org/climate)