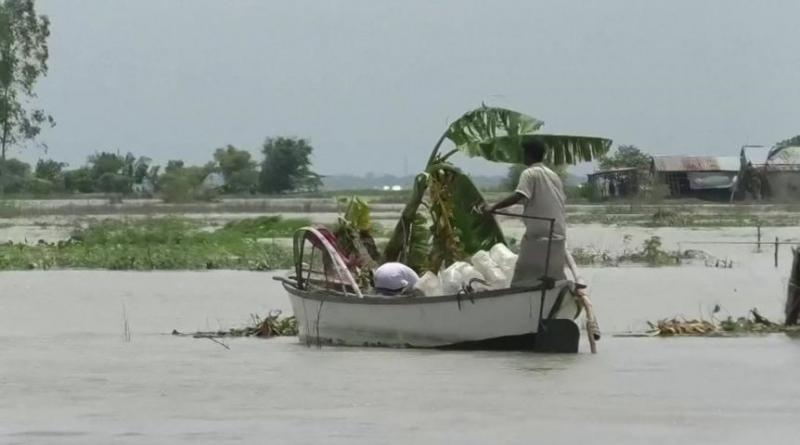 About a third of Bangladesh has been inundated by floods, with at least 161 people killed and an estimated 1.5 million displaced, according to local officials.

he heaviest rains in almost a decade began last month and are part of the subcontinent's summer monsoon from June to September.

The floods are making it more difficult to contain coronavirus, with Bangladesh reporting 266,498 infections, including 3,513 deaths, as of Thursday.

The unusually heavy rain and floods have also impacted nearby India and Nepal.

Bangladesh shares a border with India, with 53 rivers running through both countries.

The Brahmaputra and Ganges rivers, two of the main tributaries through the Himalayan mountains, have been swollen by torrential rains.

In the village of Louhajang, about 55 kilometres from the capital Dhaka, local residents displaced by floods received relief supplies.

Some were forced to use boats to access collection points across floodwaters.

Sandbags were placed along the riverbank at Shimulia ferry terminal after Padma River overflowed and caused erosion.

Residents also travelled by boat to move their cattle to higher ground to avoid the flooding.

"This is going to be the worst flood in a decade," said Arifuzzaman Bhuiya from Bangladesh's Flood Forecasting and Warning Centre.

Mr Bhuiyan said more than 1.5 million people were affected, with many homes and offices underwater, and major transportation links cut off.

"We have two challenges here: one is COVID-19 and another is flood," said Abhijeet Kumar Verma, the head of a Bangladeshi emergency services team.

A Quarter of Bangladesh Is Flooded. Millions Have Lost Everything.