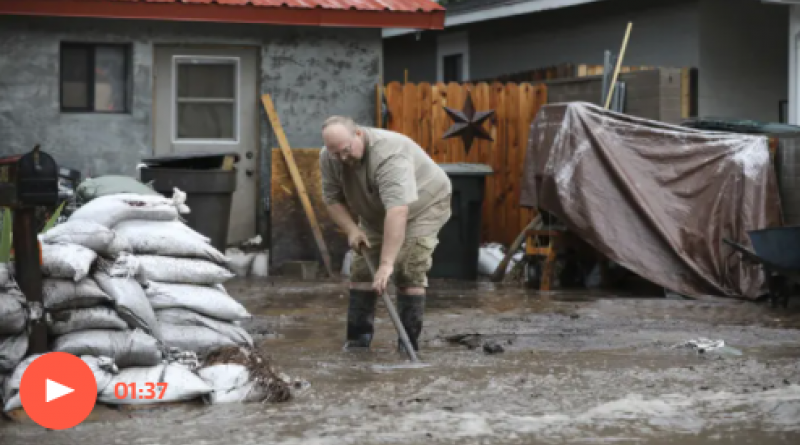 Parts of Arizona have been hit with devastating flooding, with the city of Flagstaff declaring a state of emergency after being inundated with torrents of water that turned streets into murky, fast-running streams.

In one widely shared video, a person shouting “Oh my God!” filmed as a Toyota Prius was shown being swiftly carried down a Flagstaff street by a raging swell of dark water. The city, located among the mountains of northern Arizona and considered a gateway to the Grand Canyon, has been pelted by several days of rain, prompting local officials to urge people to shelter in place.

“Water was pouring in the front door, and all we could do is try to block the door and keep more water from coming in,” said local resident David Gilley, who videoed waist-high water accumulating outside his window after 2.5in of rain fell in just two days.

The monsoonal rains also swelled the Colorado River, causing a flash flood that killed one person who was on a rafting trip in the Grand Canyon. Such floods have long been part of an environment that, although largely desert, experiences bursts of intense rainfall.

The flooding in Flagstaff, however, appears to have been aided by the scars of a severe 2019 wildfire that burned away vegetation across a large area of a nearby mountain, which allowed water to flow unimpeded into the city.

“You see in the video of the Prius moving along that there is a lot of mud coming through, which is a contribution of the burn,” said Upmanu Lall, director of the Columbia water center at Columbia University.

Arizona’s governor, Doug Ducey, put out a series of tweets about the emergency. 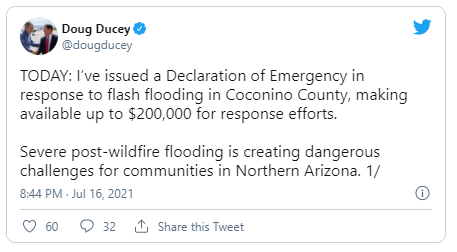